Meet Joey. Joey was a dog that was abandoned and living on the streets for a portion of his life. It wasn’t easy for this dog, but he was given a second chance that has changed his life for the better so many times. This gorgeous dog wasn’t always so gorgeous, either. He was wandering the streets in Orange County, California looking as if he was abandoned a long time ago. Matted, dirty and disgusting, this was not a dog that had been cared for in a very long time. The OC Animal Care was notified, and they began working on saving Joey’s life. Fortunately, they were able to do so. When Joey first came in, he was a mess.

Since the dog was found in a location where there are a lot of dogs that are dumped by people, it is suspected that he was dumped by a family that once loved him – or not, if they were willing to get rid of him like that. The dog was borderline feral as he’d spent so much time alone with other dogs; and his looks and fur stated the same thing. When he was rescued, he was taken to see if he could be cleaned up, if he was healthy and if he could be rehabilitated. Since most people are unwelcome of dogs that seem dirty or mean, the rescue was worried that Joey would not be adopted. They partnered with the Hollywood Rescue Grooming company and gave Joey a wonderful makeover, worked with him to get along with people and to learn to trust them again, and he’s like a new dog. Not just his looks, either; his entire personality is so different than it was when he was found almost three months ago. Now Joey has a loving home of his own, and he could not be happier about that. 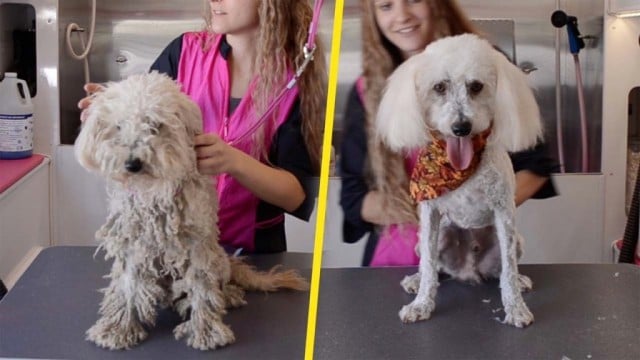