Bonsai is a special needs pup.  The adorable English Bulldog pup was born in Arkansas on April 17.  Right after he was born, his human parents knew that he will need special care for life.  Bonsai was born with a few genetic disorders; spina bifida, caudal regression syndrome, swimmer’s syndrome and sacrocaudal dysgenesis.

The mentioned disorders caused the pup to be born with small and contracted back legs, no pelvis and half a spine.Bonsai’s pet parents didn’t know what and how they can help the pup survive and live a happy life.  So they decided to reach out to Friends of Emma, a rescue group based in Fort Worth, Texas. 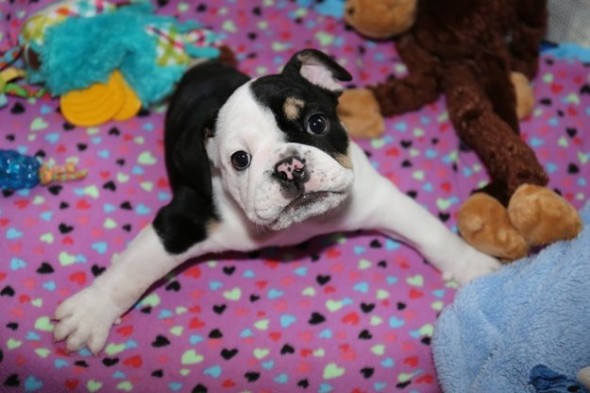 The rescue group are devoted to helping dogs with special needs.  After assessing Bonsai’s condition, the rescue group’s vets decided that the pup’s back legs needed to be amputated since it is his biggest issue.  The staff believed that the procedure will help save the pup’s life.  Bonsai’s back legs were amputated and the surgery went quite well.  The adorable pup is reported to be recovering good.  Plus, his humans decided to have an additional member of the family and adopted Ransom, who is also a “double hind leg amputee.”  Having Ransom is a big help to Bonsai because it makes him feel that he is not alone.  The two became good friends right away.  The adorable two-legged English bulldog is considered to be a living miracle.  He is now the official mascot for iSACRA (International Sacral Agenesis/Caudal Regression Association.  Bonsai is the first ever dog known to have suffered from the said disorder.

Although Bonsai is currently doing well, he still need more care to make sure that he will get the best possible chance to live a happy life.  With the expensive medical care that he needs, a fundraising was started to help pay his medical bills.  For more info please visit YouCaring.   More than $18,000 has been donated.  We wish Bonsai good health and a happy long life with his family.