It’s just not that uncommon to heat stories about dogs that are so mistreated and so neglected and so abused that are just the happiest and most loving dogs now that they’ve been rescued. We could all learn a few things from dogs like Evie. She’s had the worst luck, the worst upbringing and life so far, yet she still manages to have the most positive and amazing outlook on life of any dog that we’ve ever known. She is filled with love and happiness, and she could have chosen to feel another way. She did not, however, and that tells a story all on its own.

Evie was neglected in a way that will make your stomach turn. She was abused like that, and she’s dying. But she’s been rescued, and you would never know she’s not your typically happy pup with so much to  offer and so much going for her. While no one knows much about her past, it’s known that she was found covered in so many ticks that rescuers found it impossible to remove them all. Her body was like one big scab, and she was close to death because the blood in her body was more like water. Literally, the thousands of ticks on her body had sucked her blood so much that she was almost dead. 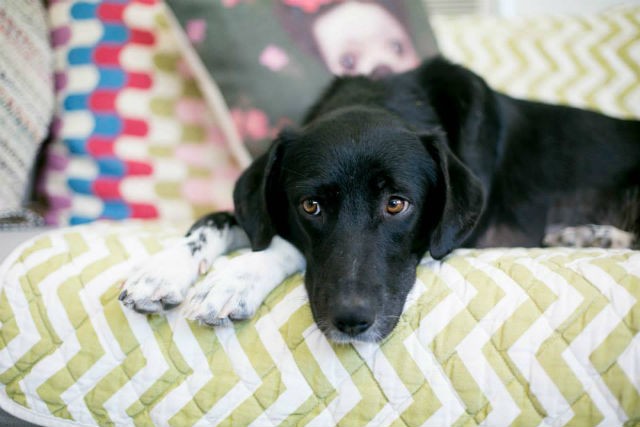 Evie’s rescuers spent hours removing the ticks and bathing this dog, though they know they were unable to get them all because there were just so many attached to her body. She’s been given blood, she’s finally eating and it looks as if her health is improving. Evie’s story is a sad story of abuse and neglect in the worst manner, but she’s still a loving dog that has found a reason to smile now that life has righted itself.