Bill Lindler is your typical firefighter. He works certain days and he is off certain days, but he never leaves the job behind. In fact, he leaves the job so much on his mind that he springs into action whenever he has the opportunity to save a life. There was once a time when he was home minding his own business when he smelled smoke and began searching to see where the smoke was coming from. It took him only a moment to realize that it was originating from the shed of a neighbor, and he grabbed some of his gear and took off. He heard he neighbors screaming; their puppy was in the shed. It turns out they had a three-week old pit bull puppy that they loved, and it was on fire. Bill Lindler did what any person would do in the same situation, and he rescued the puppy. His training allowed him to do so without becoming injured – it’s not something just anyone should do.

Despite saving the puppy, he was badly burnt. With nearly three-quarters of his body burned, his family had to abandon him at the vet after they realized they were unable to pay for his medical care and could not afford him any longer. It was not an easy moment for anyone. When Lindler heard that the pit bull pup needed a home, he adopted him. It’s been a year now, and the dog is officially a certified arson detection dog that works with Lindler and his team at the fire department. It is truly a story that is amazing from start to finish, and one you cannot help but to love. 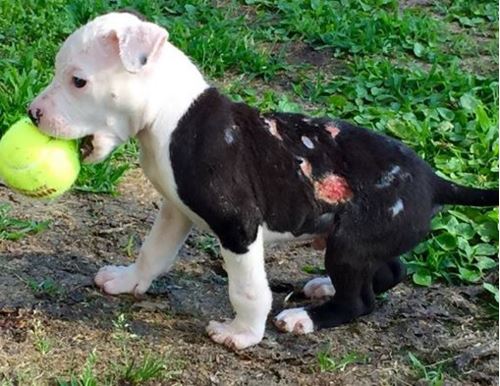