When Johnathan Hardman and his beloved German Shepherd Rambo set out to hike Mount Bierstadt, in Pike National Forest, they never knew what was going to happen to them.  During the hike, the weather on the 14,000 feet mountain changed very quickly.  The beautiful day was about to change into some very nasty weather.  The man and his dog were trying to make their way down the mountain side, to get away from the wind and cold temperatures.  But something very bad happened, that would keep them from reaching the bottom in one piece.  When the pair were about five minutes into their decent, a dark looking cloud appeared out of the blue.  You will not believe what happened next. 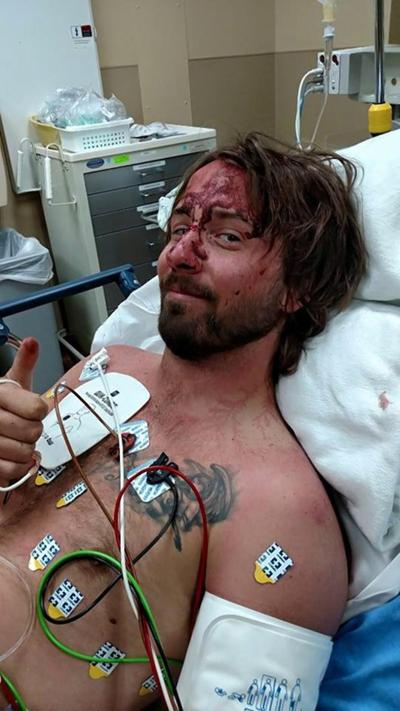 Hardman and his dog were both struck by a bolt of lighting, that sent both of them to the ground.  When Hardman woke-up on the ground, he had no clue what had just happened, but he knew something was not right.  He had blood pouring down his face and when he looked at his hand it had turned blue.  He could no longer use his arms or legs and he was worried about what happened to his dog.  Rambo was just behind Hardman and after regaining his mobility Hardman worked his way back up the hill where other hikers were taking shelter under a large rock.  When Hardman reached the location, he saw his dog laying there and Rambo was not moving.  He tried to go to his dog, but the other people would not let him because of his injuries.

Sadly Rambo did not make it and the lighting bolt killed the dog.  But Hardman survived because his beloved pet took much of the lighting bolt, saving the man’s life.  That day eight other hikers were injured by lighting and all are lucky to be alive.  Someone who was not injured helped the group off of the mountain, during a very hard 3.5 mile hike down.  Hardman is very sad that his dog was killed by the lighting bolt, but was very thankful that the dog helped save his life.