Patch is a five-year-old Greyhound that is now considered too old to race. These dogs are often born and bred to do just that, and their owners use them to race for as long as possible, retiring them when they are no longer young enough to handle the job. This beautiful dog is considered too old to race, so its owners decided that they no longer wanted the dog. It was taken to a shelter in the United Kingdom and abandoned, unwanted and unloved because of its age. It’s spent a full year there waiting for the right family, someone to love it, to come forward. Fortunately, the time this beautiful dog had to spend in the shelter is now over for good.

Malcolm and Gail Hickmott have made the decision to adopt Patch. They love Greyhounds, and they have several of them already at home. It turns out that they heard that a lot of people who own these beautiful dogs make the decision to get rid of them when they reach the age that they are no longer able to race, and it makes them feel sick to their stomachs. Because of this, this family decided to start adopting these ‘old’ dogs and give them a home. 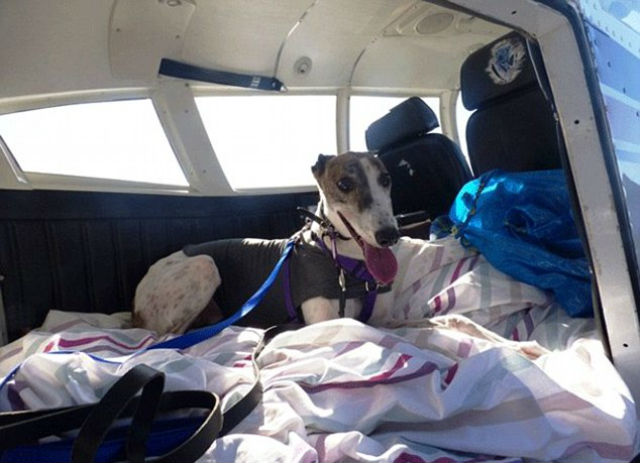 Despite being left at a shelter to fend for himself for so long, this darling dog is getting the last laugh in the faces of his previous unloving owners. He was brought home to his new family and their other Greyhounds in his own private plane. He is being treated like a king, and he is nothing short of ecstatic about it. He loves his new life, and he is making sure that everyone knows about it. We really love this story and all that it stands for, and we are thrilled for Patch.