Home
Dog Breeds
Pit Bulls
Is This Pit Bull The New Lassie? It Would Appear That Way
Prev Article Next Article

When Ember the Pitbull walked into her owners room in the middle of the night, she had something important to tell her. Ember started making really strange sounds, which woke the woman from her slumber. Not knowing what was wrong, the owner quickly got out of bed. The dogs owner whose name is Tracy Daniels, said this about the incident. “We were sleeping and she just sat down next to the bed and she was doing this real low grumble. It wasn’t even a growl, it was just this odd grumble,” This totally shocked Daniels and she knew right away that something very bad had happened. Ember was very eager for her owner to follow her.

After Ember got Daniels out of the bed, she led Daniels to the bathroom. Upon entering the bathroom Daniels found her young son, passed out on the floor. The child had a seizure and needed immediate medical attention. After picking the child up and calling for help, the boy was rushed to the hospital and tests were ran. Thankfully the child was ok and everything checked out fine. But if Ember had not jumped into action, there is no telling how this story would have ended. The family is really thankful that Ember was so quick thinking and she just might have saved their son’s life. 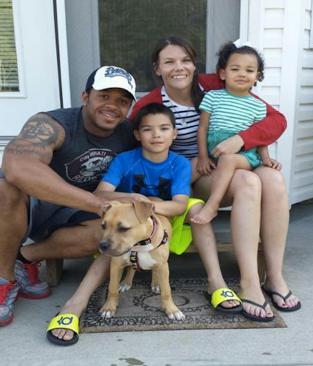 Ember, which was rescued by the family, had a difficult life before she found a forever home. Some say that Ember was just returning the favor of being rescued when she saved the child. She really loves the boy who has become her best friend. She often sleeps by his side, making sure that he is always safe and sound. The pair can often be found playing together and they love taking long walks. Ember has been a positive influence in the lives of the family members and has added a lot of quality as well. This is a beautiful story with a happy ending and this family has many more years together. Ember will always be a valuable part of the family and each member has tons of love for this adorable and smart canine.