Home
Dog News
Kids Writes a Letter to his Dog in Heaven, Mailman Writes Him Back as the Dog
Prev Article Next Article

When a dog passes away it’s one of the hardest days for a family.  For those who care for and love dogs the way they should, losing a dog is no different than losing a member of the family.  So when at the age of 13, Moe the beagle passed away, Mary and Roberto Westbrook had a hard time explaining it to their 3-year-old son Luke.   Not only did they have to tell him that his dog died, but that he wouldn’t be coming home again.

Luke asked his mom if he could write a letter to Moe. Doing so became a bit of a mother-and-son ritual. The usual message: “I miss you. Hope you’re having fun in doggie heaven.”  Mary carries the letters to the mailbox and each are addressed to “Cloud One.”   She then retrieves the letters after Luke falls asleep.  However, just a few weeks ago Mary forgot to fish one of the letter out and the next morning it disappeared with the mailman.

“I figured someone would just throw it away once it got to the post office,” Mary said. “It didn’t even have a stamp.” But this week, an answer appeared in the Westbrook mailbox. Printed on paper marked with a tiny “USPS” at the bottom, it was addressed to Luke from Moe and it reads:  “I’m in doggie heaven, I play all day, I am happy, Thank you 4 being my friend, I wuv you Luke.”

I’m not going to lie.  I’m in tears right now after reading this. 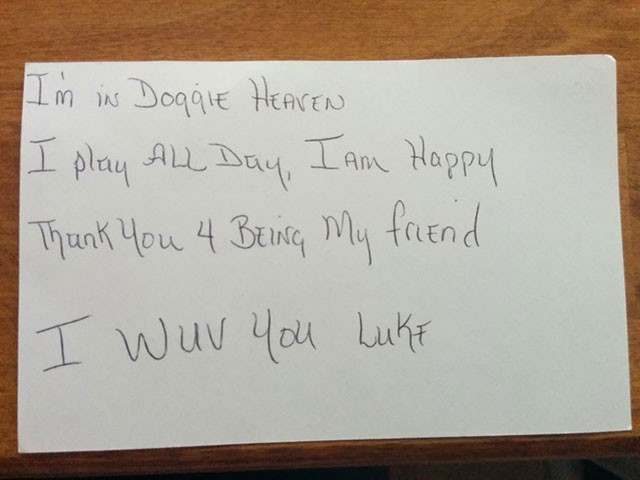