With the horrible weather that’s been plaguing the residents of Texas in recent weeks, many dogs have been abandoned by their families. With forced evacuations in place, many families either did not choose to bring their dogs along with or were simply unable to bring them with; this means they were left behind to suffer through the horrible flood waters claiming the lives of many and their animals. Many people were kind enough to stop when they saw abandoned animals to help them get to safety, but many were not. It was one man and his son, whose names we do not know, who decided to get into their boat and brave the dangerous waters in order to save the animals – and they did.

They found animals floating on mattresses in their flooded homes. They found animals tied up outside in the water. They found them in so many places that you would be horrified to realize that humans are actually capable of leaving their animals in these conditions. It’s just something that we don’t even like to talk about, but it does happen. These animals were rescued when this family could get to them, and they were taken to the SPCA of Brazoria County where they are being held in a temporary location until they are claimed or put up for adoption. This family made several trips and saved as many as forty dogs from the certain death of these horrible flood waters. They are good people. 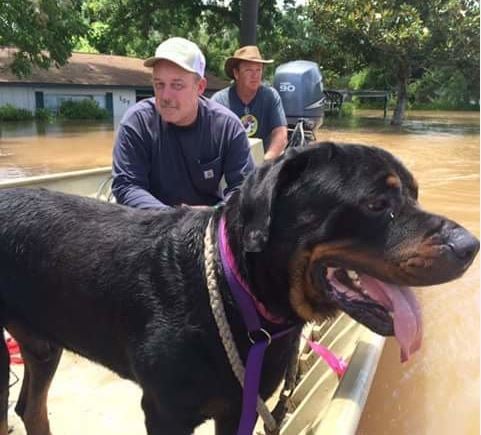