Terrell Watson is a football player for the Cleveland Browns, and he has a thing for dogs. He adopted a dog a while back and loved that dog so much he decided he just had to have another. He has so much fun with his adopted pit bull that he wanted another one, and he took a signature selfie with this dog to show the world just how happy he was to have adopted a puppy, and now he’s gone back to adopt another one and make his life just a little bit more fun. When he adopted Dexter, he posted a selfie on his social media accounts of himself and the dog both smiling, and it went completely viral. Now he’s posting more photos with his new dog, and it’s just as adorable. He hasn’t quite gotten the same selfie smile with his new pup, but we don’t care so long as he continues to adopt dogs that won’t have a home otherwise.

Now he’s the lucky owner of a dog by the name of London, and London and Dexter seem to get along just fine. They seem to have a great time together, and Terrell Watson is appreciative of City Dogs for allowing him to come into their facility and choose animals to bring home with him. He’s always been a dog lover, but now he’s getting to share his love of animals with the world. This shelter loves the publicity they’re getting from his photos, and hopefully it will bring in more adopting families to provide all the animals with loving homes. 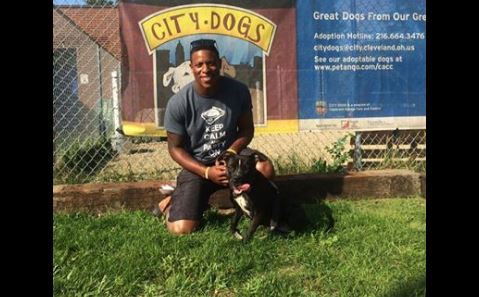