Those who work tirelessly at the Guardians of Rescue animal shelter love what they do. They love that they are able to take in dogs in need of rescue and homes and match them with families that are in need of a dog for their loving home. And when they adopted out their lovely pit bull Athena earlier this year, they had no idea that they were saving more than just this dog’s life. The family who adopted Athena wrote a beautiful letter updating the shelter on the dog’s life the past seven months.

It turns out that Athena wasn’t the one who was rescued and saved here; it was her family. The family who adopted Athena also has a Labrador, Charlie, who is 9. Charlie suffers from terrible seizures caused by epilepsy. Since this family has had Charlie, he’s suffered through at least one seizure every two weeks. Since bringing Athena into the home, however, Charlie has only had one. Athena glued herself to Charlie’s side when he had his seizure, and she did everything with and for him during that time.

She nursed him back to health and never left. And since then, Charlie has not had one seizure. He loves Athena, and she loves him. These two beautiful dogs have created a friendship that will last a lifetime, and their family believes that Athena has saved their dog and their family. It is the most beautiful story. 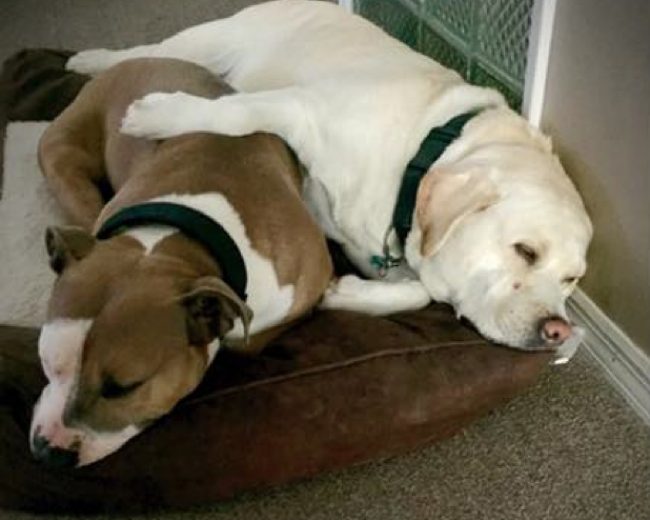