When it comes to survival, one dog seems to have what it takes to make it threw just about anything. This very cute Pit Bull has a very unique name that seems to fit him well.  Willing the Wonder Dog had it hard right from the start.  At birth, Willing was first brought into the Vet because the owner noticed that his back legs didn’t look normal.  The tiny puppy was looked over by the Vet and they determined that his spine was abnormal.  At only 15 hours old this dog life looked short.  The dog’s owner turned out to be a not so nice breeder, who was very upset that he was wasting money on the dog.  The Vet believed that this deformed puppy would never be able to drink milk from its mother, because he simply couldn’t compete for the milk.  The Vet suggested that the puppy be put down.  But the owner declined and stated that he would try to hand raise the dog. 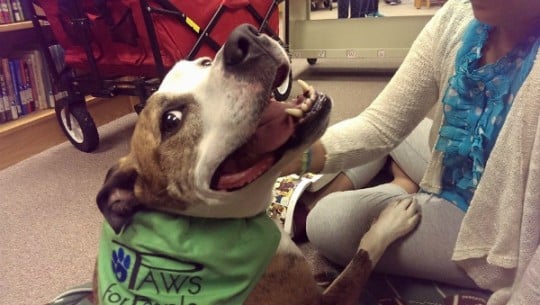 The Vet told the owner if Willing lived for 6 weeks and he still couldn’t handle the puppy that he would take the dog in.  The owner returned in 8 weeks hoping the Vet would put the dog to sleep, but instead the Vet took ownership of the pooch.  To the Vets surprise the dog had no special treatment and was not being bottle fed.  But despite his deformities Willing was able to fight for milk and lived without any help from his cruel owner.  This is when the canine took on the name of Willing the Wonder Dog.  After Willing was returned, he underwent surgery to amputate one of his back legs, so that he could get around better. 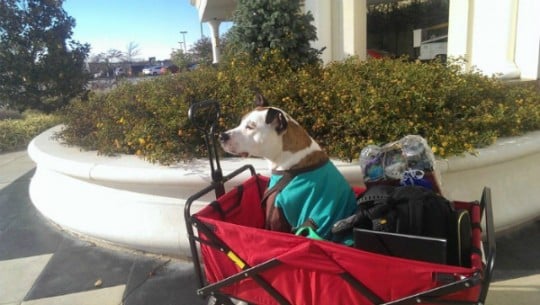 At 10 weeks old, the Vet and new owner noticed that Willing was having problems walking.  After a specialist looked at the dog, it was confirmed that the canine had elbow dysplasia.  After this very bad news the Vet decided to help Willing live the fullest life possible and got the dog a special wagon to pull him around in.  This helped ease the dog’s pain, without having to give him pain pills every day.  Willing is now doing great and is even an advocate for Pitbulls.  Willing has been to a march in Washington D.C., to help raise awareness about the breed and help people overcome the myths and misconceptions about them.  This truly amazing dog, turned out to have a wonderful life despite his problems.