Home
Dog News
Woman Pays $1,000 to Save 100 dogs at Meat Market to Save them from Slaughter
Prev Article Next Article

Each year in China there is a festival in which thousands of dogs are brought into a market.  These canines are then slaughtered for their meat for consumption by humans.  This festival draws hundreds of people from around China each year and many dogs lose their lives.  One Chinese woman wanted to do something to save at least a few of the dogs and traveled many miles to get to the festival.  The 65-year-old Yang Xiaoyun ventured 1,500 miles with 7,000 Yuan, which is equivalent to $1,000 American dollars.  With this money the woman was able to save 100 of the dogs. The woman who is an animal lover doesn’t agree with the practice of killing dogs for meat and thinks that the festival should be shutdown forever.

Yang is going to take the dogs to her animal sanctuary which she started several years ago when she rescued a cat from a river.  She plans to try and purchase more dogs from the festival and hopes to save at least 1000 dogs.  She plans to house the dogs at her sanctuary where they can live without the fear of being killed for their meat.  Each year more 10,000 dogs and cats are killed at the festival and hundreds of people rush to buy them for the celebration.  Viewing the pictures of this event is really hard for dog and cat lovers around the world and they are started to speak out about it. 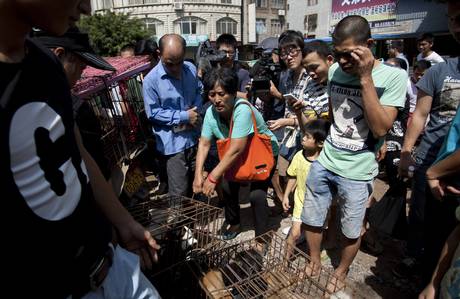 International outcry has started to raise awareness about this festival which is called the Yulin festival.  Many people around the world are starting make negative comments about the festival and some people are very mad.  Humane societies from around the globe are trying to raise money and awareness in hopes that it will end this horrific practice.  But changing the way people think about the treatment of dogs and cats may be hard because this festival has been around for many generations.  While this would never be accepted in the Western World, the act of slaughtering dogs and cats is a common practice in many parts of the Far East.