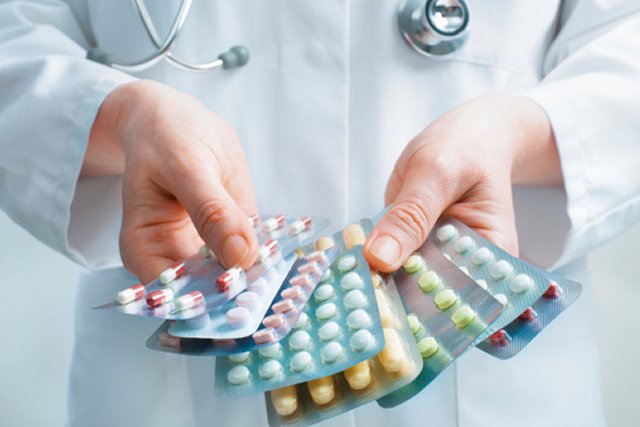 Leaving a pill bottle opened on a low countertop, packing your medication in a plastic baggie or accidentally dropping a pill on the floor could harm your dog more than you realize. Dr. Justine Lee, associate director of veterinary services at the Pet Poison Hotline, says 50 percent of the approximately 150,000 annual calls the hotline gets are about pets swallowing human medications. Recently, the hotline came out with a review of the call data, which revealed the top 10 offenders.

Called “statins,” these popular drugs treat a problem that dogs typically don’t have. The good news is that serious effects in dogs only occur from chronic ingestion.

Hypothyroidism can be common in dogs, and the dose required tends to be 10 times stronger than for a person, says Lee. For this reason, accidental ingestions are usually not a problem, unless a dog eats an extremely large amount.

Used to treat high blood pressure in people, beta-blockers can have serious effects in dogs, lowering their blood pressure and heart rate to dangerous levels. “It has a very narrow margin of safety,” says Dr. Ahna Brutlag of the Pet Poison Hotline. “It may not take very many to cause lethal side effects.”

Another group of blood pressure medications, ACE inhibitors can cause problems similar to beta-blockers, but with less severe effects. Still, heart medications should never be within a dog’s reach, says Lee.

“The containers are colorful, plastic and may make a rattling noise,” says Lee. “Dogs seem to find them irresistible.” Thankfully, most canines aren’t affected by accidental ingestions, but non-spayed female dogs are at risk of side effects. High doses can also lead to serious bone marrow problems.

They’re designed to reduce anxiety or improve sleep, but many dogs instead become agitated rather than sedated. Lee says such medications are commonly left on a bedside table. “Putting them there helps people remember to take them,” says Lee. “But curious animals often get to them first.”

Even minimal ingestion of these drugs can be deadly to dogs. Tremors, seizures, elevated body temperatures and heart problems can result. Brutlag says it’s important to educate children taking these pills: “Make sure your children know how dangerous the pills are for the pets.”

It’s true that antidepressants are prescribed to pets, but Lee says the veterinary versions have a different makeup. The human version can actually lead to agitation in dogs.

This over-the-counter pain medication can be devastating to pets. And ingestion often isn’t accidental. “Pet owners think because it’s over the counter that it’s safe,” Lee says. Acetaminophen ingestion by dogs, however, can lead to liver failure or, in large doses, red blood cell damage.

Non-steroidal anti-inflammatories are another pain medication. Just one or two pills can lead to serious stomach or kidney ulcers, or kidney failure. “The only pain pill we ever recommend is aspirin,” says Lee. “People think aspirin is the same as Tylenol or Advil, but it’s not.”

Prevention
Lee and Brutlag offer tips to help prevent accidental ingestions, based on the most common stories they get from hotline callers: