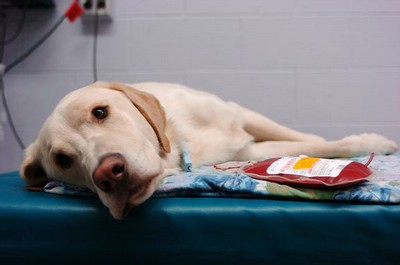 Checkers and his owner, veterinary technician Bonnie Heitz, acted as heroes, even though their names never made the headlines. While this pair may not be familiar to you, Checkers, the Australian Shepherd from Concord, Calif. donated blood to save the lives of countless dogs that required blood transfusions to treat trauma, cancer, and other life-threatening conditions. These dogs were given a second chance because of Checkers, who passed away at a ripe old age in 1990. Both he and his owner helped inspire additional canine blood donations, which have since led to organized dog blood banks nationwide.

Why Dog Blood Banks Are on the Rise

Much progress has been made in the canine blood banking industry since Checkers’ lifetime. Most donor dogs in the early 1980s, like Checkers, belonged to veterinarians or their staff. “Checkers was before anyone thought of blood banks for dogs,” says Heitz. In fact, the practice of banking canine blood is a relatively new concept, with most facilities opening within the last 15 to 20 years. One reason is that advances in veterinary medical technology have fueled the need for blood. Animals are benefiting from many of the advanced tests and procedures developed initially for human medicine, and blood transfusions are no exception. Also, more owners are treating their dogs as part of the family and are willing to spend money on emergency and internal medicine, orthopedic and soft tissue surgery and oncology, all of which can require life-saving blood transfusions.

Qualifying as a donor is relatively simple. While purebreds and mixed breeds can be donors, dogs must meet certain age and weight requirements, which vary from program to program. For example, one program requires that dogs must be between one and six years of age and weigh at least 55 pounds. Another requires donors to be between one and eight years old, with a weight of at least 50 pounds. Yet another requires dogs to be aged between nine months and seven-and-a-half years old and weigh at least 35 pounds. In addition, dogs must pass a physical examination and meet additional requirements. These may include that the dog is:

If dogs meet the pre-qualifications, their blood is typed and screened for pathogens, such as Lyme disease, ehrlichia and leptospirosis. The blood is typed since dogs, like humans, have different blood types. A complete blood count and a chemistry screen then check the red and white cells, platelets, electrolytes levels and general organ function. Screening potential donors is expensive –roughly $220 per dog, according to a 2006 study published in the Journal of Applied Animal Welfare Science. Donna Oakley, director of the Penn Animal Blood Bank at the University of Pennsylvania School of Veterinary Medicine, says, “You can’t put a price on the blood we collect. It helps us practice better medicine, and it helps save the lives of pets.”

How Canine Blood Helps Other Dogs

Dogs that pass with flying colors are eligible to become donors. While dogs can safely donate monthly, most programs collect every seven to 12 weeks, with dogs between 35 and 50 pounds donating one-half pint and dogs over 50 pounds donating one pint. Once collected, the blood is processed into components including packed red blood cells, which have a shelf life of about 30 days, and fresh frozen plasma, which can be stored for one year without losing its clotting factors. As a result, one unit of blood can theoretically treat three, four or more dogs depending on the recipient’s size and status, according to Oakley. “The therapeutic impact is much quicker when you use only the components — that part of the blood that a dog needs.”

California is the only state where commercial veterinary blood banks are required to be licensed and inspected yearly by the Department of Food and Agriculture. As a result, these facilities are required to house donor dogs on-site. Garden Grove’s Hemopet, a nonprofit facility that ships blood products nationwide as well as to Canada and Hong Kong, houses racing greyhounds rescued from Texas, Oklahoma and Arizona. Hemopet’s dogs, according to Founder and President W. Jean Dodds, DVM, receive 24-hour-a-day, on-site veterinary care and maintenance. Dogs remain in the program for approximately 12 to 18 months before being adopted by loving people within the region. “These dogs have given blood to save the lives of other animals,” says Dodds. “They have a special need to be adopted, and we have an ethical obligation to see that they are well cared for.” California facilities that collect and store blood for internal use, such as the University of California, Davis, School of Veterinary Medicine, are exempt from housing on-site donor dogs.

In addition to plenty of free cookies, kisses and tummy rubs, some programs offer dog contributors free physical examinations, comprehensive health care screening, and blood tests to guard against infectious diseases as long as a dog remains a donor. Others provide free vaccinations and canine goody bags filled with toys, treats and food. Some facilities, such as the Eastern Veterinary Blood Bank in Severna Park, Md., which ships 25,000 units a year, guarantee free blood for all donors. “For every unit of blood a dog donates,” says Theresa Connelly, Eastern Veterinary Blood Bank events coordinator, “that dog is guaranteed one unit of blood for free if it ever needs blood.” If the dog requires a transfusion any time throughout its life, EVBB will ship blood products, which normally cost upwards of $300, for free.

Canine Owners and Donors Are Indispensable

While closed colony or hospital-based donor programs were once the norm, many universities and blood bank organizations nationwide are turning to community-based volunteer donor programs using community blood drives that allow facilities to develop a large, reliable source of blood products without maintaining a colony of on-site dogs. “We are looking for people who care about people and animals. People who take good care of their pets and whose pets are in the best of health,” says Donna Oakley. The University of Pennsylvania School of Veterinary Medicine, where Oakley works, started the first volunteer donor program in 1985. The program currently has about 1500 active donors and the nation’s only canine blood mobile.

Commitment requirements may vary, with some programs requiring that dogs donate blood as little as three times a year. Others require a minimum of six times a year, while still others need a minimum three-year commitment, during which your dog would donate blood three or four times a year. Dogs must be calm enough to lie on their side for about 10 minutes, which is approximately how long a collection takes. “This is truly a volunteer program from the owner to the dog,” says Oakley. “The dog decides whether or not to donate blood. We use no chemical or physical restraints. If a dog struggles, we don’t draw blood.” Despite the possible discomfort, with a bit of coaxing from you, your dog can be a Checkers-inspired hero and help save many canine lives.

Tracy Libby has authored six books about dogs, including Building Blocks for Performance (Alpine 2002). She exhibits Australian shepherds in obedience and conformation and also shares her home with six cats.