Reading about dogs that have suffered in any way is often heartbreaking for animal lovers. However, stories that begin with a tragedy often have a very happy ending. Dogs that have experienced a terrible ordeal often go on to live very happy and fulfilling lives once they have recovered. One heartwarming example of this is the story of a nine-year-old dog called Taka.  According to I Heart Dogs, Taka was the victim of a house fire in October 2018. Trapped in the house when the fire took hold, the poor dog suffered severe burns to her head, back, face, and his extremities.

As a result of his injuries, the dog needed care 24-hours a day, which is a big commitment that requires a lot of dedication and love. Fortunately, he was taken to the Care More Animal Hospital, which is located in Martinez, Georgia.  Taka became popular among the staff and volunteers at the animal hospital. One of the staff, Crystal Lesley, became particularly fond of the injured pooch. In fact, the veterinary technician was so in love with the dog that she decided to take him home with her to care for him as his foster mom.  Unfortunately, a problem soon developed. Lesley had other dogs living in her home, and Taka began to display aggressive behavior towards them. She did not feel that it was fair to her other dogs to have Taka remain in her home. She was forced to make the heartbreaking decision to look for another home for Taka.

However, events took a rather different turn when one of Lesley’s friends told her about the Canine Training Project. This is an organization that was founded by Mandy Foster. The aim is to train dogs to have a purpose in life, such as in the role of therapy dogs.  Although Taka had no prior training and he was an older dog, he was surprisingly quick to adapt to the challenge. Foster explains that it is possible to train older dogs in just the same way as younger dogs., although it can take a little longer. She said that Taka had done brilliantly well and had completed his training without any problems.  Foster decided that Taka had the potential to have a special purpose in life. She wanted to train him as a therapy dog specifically for a local burn center so that he could support human burn victims who had suffered in the same way that he had. 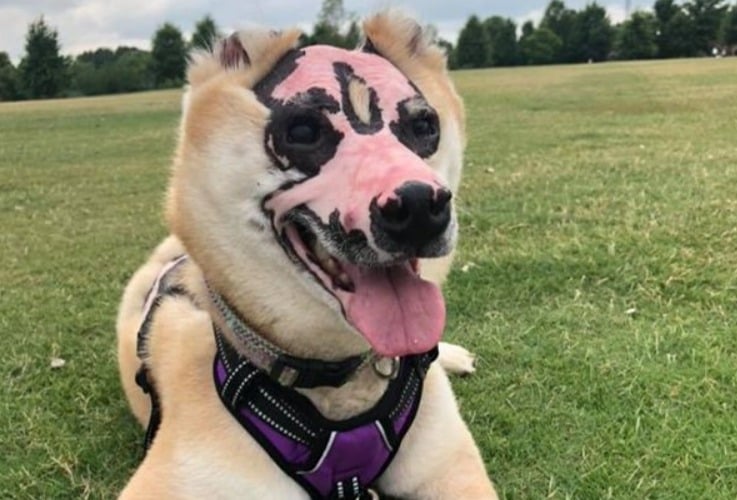 According to Foster, there are two factors that meant that Taka was perfect for the job. First, she realized that Taka had the perfect temperament for such a role. Second, she felt that people would relate to him because of his experiences. He still has the physical scars of his burns, and his fur hasn’t regrown over the scarred areas. Therefore, most of the fur is missing from his face. Foster believed that the fact that people could relate to him would benefit both the patients and Taka. Taka has now received his Canine Good Citizen certificate following his training. Now that this training is complete, he will begin his next stage of training, which is the specialized therapy dog training.

Foster is looking forward to training Taka as a specialist dog, and she is excited about his potential for the future. She said that he could offer some hope to a child or adult that has suffered the same experiences as him. Therefore, there is real value to the work he will do as a therapy dog.  Taka is not alone in taking on the valuable role of a therapy dog, as the use of animals for therapy is becoming increasingly common. The rise in their use follows many research studies on the benefits of humans interacting with animals.  According to Feinberg Consulting, interacting with animals leads to physical benefits for patients. It increases oxytocin and dopamine levels, while also lowering levels of cortisol.

There are three main types of a therapy dog that are currently in service. The first group is therapeutic vision dogs. These are looked after in people’s homes, and their owners take them to visit patients in nursing homes, rehabilitation centers, and hospitals. This is the type of therapy dog that Taka is training to become. These dogs can raise people’s spirits and motivate them with their treatment and therapy.  Animal-assisted therapy dogs are the second group of therapy dogs. These help individuals to make a physical recovery by assistant physical and occupational therapists. They support patients in improving their movement and mobility, and can also help with things like hand-eye coordination or fine motor control. In most cases, these therapy dogs work in rehabilitation centers.

The third type of therapy dog is a facility therapy dog. These usually work in nursing homes or mental health facilities. Their work involves supporting people with mental illnesses or conditions such as Alzheimer’s disease. Usually, the facility therapy dogs are handled by a trained member of staff.  Not all dogs can become a therapy dog like Taka as they must have certain personality traits. For example, they must have a good temperament, enjoy the company of humans, and have the ability to cope with being in a variety of different environments. If a dog has all these traits, then it is probably possible to train them to become a therapy dog just like Taka.  Once they are trained in different situations, a therapy dog can offer people who are going through difficult phases of their life some much-welcomed support in their hour of need. Many people who have used therapy dogs in the past consider them an invaluable part of their recovery from an illness or a bad experience.

It is for these reasons that the organizations that are recognizing the value of therapy dogs is now expanding, and they are even being used by the police to support victims of crime, such as children that have been abused and women who have been raped. Therapy dogs can help them to cope with the interview and examination processes. Similarly, therapy dogs are also being used in educational settings to help students who are suffering from stress.

Dog Missing for 54 Days from Tornado is Reunited with Family