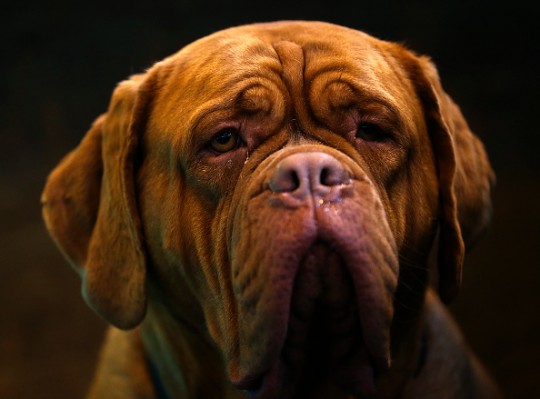 There is always a certain level of fascination that comes along with the English Mastiff. It’s a big dog, and big dogs sometimes garner more attention than others simply because of their size. This is one of the largest dogs in the world and it’s a very distinct looking dog. this means more people than you might realize have an interest in looking at the dog, in seeing what it’s all about and in being near the dog. Considering how beautiful the dog is, it’s not really a huge surprise that it’s such a popular dog and that it does get so much attention from people. It’s gorgeous, big and it looks dangerous. It’s a very sweet breed, which is something those who know the dog will understand. Those without any experience with this breed, however, will assume it’s dangerous and vicious. There are just so many things that people do not realize about this breed that we thought we’d share a few of the most exciting and most interesting facts about the English mastiff with you just for fun and entertainment – and a little additional knowledge.

There was One Aboard the Mayflower

A man by the name of John Goodman, 25-years-old at the time, was aboard the Mayflower when the ship came to America. He had with him his very own English Mastiff. He didn’t live long once he was here in America, but some of the other people aboard the ship with him took it upon themselves to care for his dogs so that they would continue to live.

They are War Ancestors

It’s thought that the English Mastiff is derived from ancient war dogs of the past. The breed looks very similar to some of the statues of old war dogs that people used to see in the past out and about among other locations. And it’s believed that the dog was held in high regard because it was a war dog.

When you hear a kennel club refer to a dog as a mastiff, they are referring to an English mastiff. Despite the fact that there are several mastiff type dogs in the world, these are the ones that are recognized and referred to almost every single instance in this situation.

They Live a Long Time

Most dogs live approximately 10 years give or take a few. Some live less and some live more, but the oldest English Mastiff was recorded as living for approximately 15 years. Since this breed typically only lives about 10 years, it seems that this dog was a real overachiever, living for such a long time and making it so long in life without actually living unhealthy or sick.

It’s not the Healthiest Dog

Let’s go ahead and make it clear that there is always a risk for health issues with any dog in the world. The English mastiff is no different than any other dog. However, unlike some breeds, the English Mastiff does have a few breed specific health issues that often cause potential owners to think twice about embracing this breed in their homes. The dog is not really well-known for being overly healthy because of its sheer size.

Because the mastiff has been around for so many hundreds of years and it’s been a dog that’s been held in such high regard in so many places across the world, it’s been portrayed in a lot of fine art work. Some of the most famous artists in the world both past and present have been able to depict the English Mastiff in their work to create art that’s just lovely and on point.

It’s All about the Mass

They Were Fight Dogs

Before 1835, it was common for people who owned English mastiffs to use them as dogs for fighting. They were, at the time, bred as cruel and vicious dogs that were designed to ensure that people would fight them for sport and entertainment. It did not take long, however, for people even back then to realize that this is very cruel and unusual punishment and that dogs are just not meant for this kind of treatment and the fighting was stopped and outlawed.

There was a time in which the English mastiff was not all that popular in America, but it’s gaining popularity rapidly. It’s managed to make its way up into the 20s in terms of popularity in the states, and it’s continuously working its way down the list as it gains more popularity.

The Mastiff is the Heaviest Dog Ever Recorded

Back in 2000 an English Mastiff by the name of Zorba broke the record of the heaviest dong ever recorded. He measured more than 8 feet from nose to tail and he weighed a very heavy 343 pounds at that point in his life. He was previously recorded as being the heaviest dog in the world when he was six-years-old and he weighed just over 314 pounds. He wanted to take the chance of being even bigger, and he did it.

They Were almost Gone for a While

Mastiffs are large dogs that eat a lot of food, and they are very expensive to keep as pets as a result of their eating habits. And this means that many of the people who owned them during the war were unable to afford to keep them at home. The dogs were given up, many were unable to survive this and they were almost extinct until the war ended and people were able to afford to have dogs like this again.