Much like the Blue Heeler we talked about not too long ago, the Red Heeler breed is another Australian Cattle dog. Truth is, they are the exact same dog, but just different colors. And even though we told you about the Blue Heeler, there must be more to it, right? Well, we thought there definitely must be some information out there that most people don’t know about this breed, so here goes nothing.  Here are 10 things you didn’t know about the red heeler. 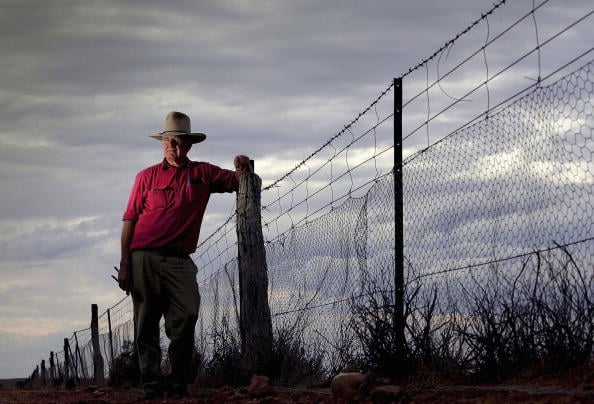 Originally Cross Bred with a Dingo: Well, there you go. How many people know that the Red Heeler in their original form were created with a breed with a dingo? I bet not many of you. This dingo side of them was sort of breeded off, but that is how they got their red coats. I know there is a lot of talk about Dingoes eating babies in pop culture, but Red Heelers do not do stuff like that. Don’t let the dingo side scare you off. 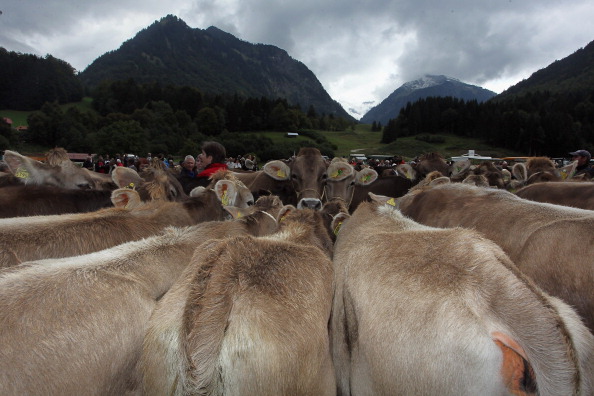 Called Heelers for Biting: The reason they are called Blue and Red Heelers is obviously because of the color of their coats. But the Heelers word is because they herd animals by biting at their heels. Don’t worry, not viciously. It is more like a nip to get them moving. Thus the name, Red or Blue Heelers. Hey if it’s not broke, why fix it. 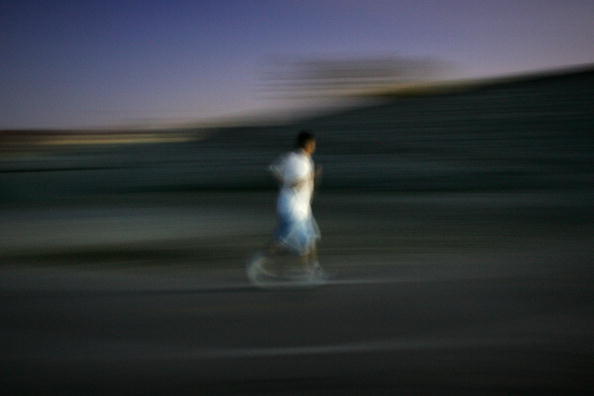 Many Suffer from Progressive Blindness: Kind of a rough fate for a dog that is a herding breed, but the Red and Blue Heeler are known to sometimes suffer from the condition of progressive blindness. That is not to say it affects every single Red or Blue Heeler, but it affects enough that we wanted to bring it up. Do not let that scare you away from this wonderful breed. 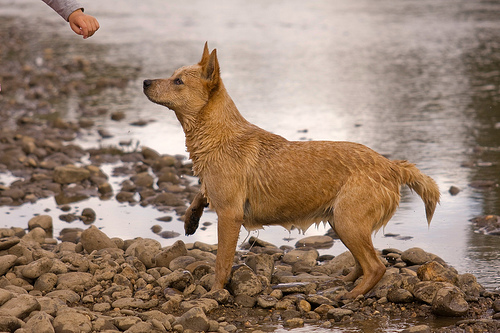 Cautious in New Situations: While the Blue Heeler may be a great working dog and a great herding dog, that does not mean it will be naturally comfortable in every situation. Presenting it in new environments and to new people can make the dog apprehensive.  This dog would rather be active and working then anything else, so keep that in mind when you deal with it. This can apply to many breeds, though. 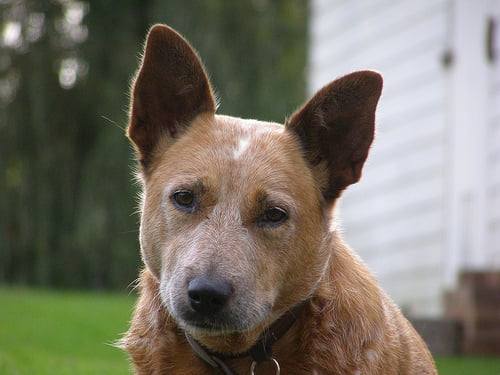 Didn’t Start Breeding Them in America Until the Fifties: Though the dogs were common in Australia at that point, it wasn’t until the man who bred them brought them to America that an American breeder took interest and started breeding them over here. They were originally called Queensland Heelers, but this changed shortly after. 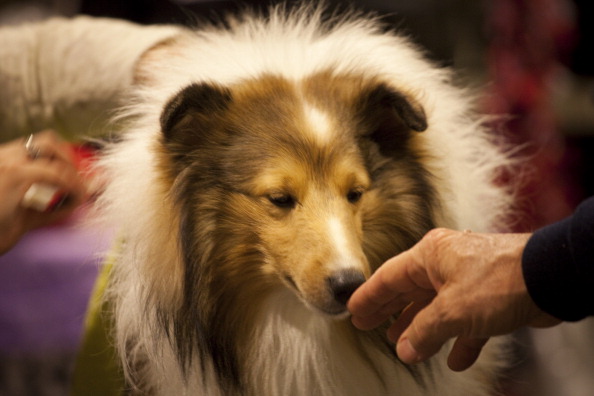 Part Collie: We mentioned the Dingo in the beginning article, but held back on telling you the other breed. Outside of being part Dingo, the Red Heeler is also part Collie. As many know, the Collie is a loving breed full of energy and life, and the Dingo is, well, I don’t know much about a Dingo, to be honest. Outside of that one Seinfeld (and move) reference I already made. The Collie and Dingo mix makes for one lovely dog, though. We can all agree on that. 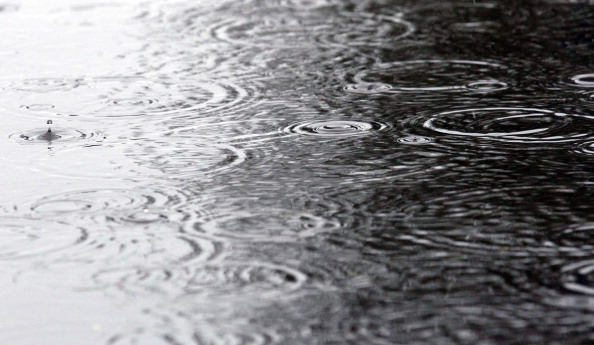 Weather Resistant Coats: When it comes to working dogs and herding dogs, it is best when they have weather proof coats. You can never tell what weather you may need to have this dog outside, and they have the kind of coats that can withstand it all. Also Called Queensland Heeler or Where It Was Bred: Obviously a nod to its Australian roots, the Red Heeler seems more name for its coat now than anything else. Truth is, this dog has had many names over the years. Red Heelers, Queensland Heelers,  Australian Cattle dogs, and the list goes on and on. We tend to stick with mainly the named Red and Blue Heeler now. But internationally, it is not uncommon to hear them called by their other names. 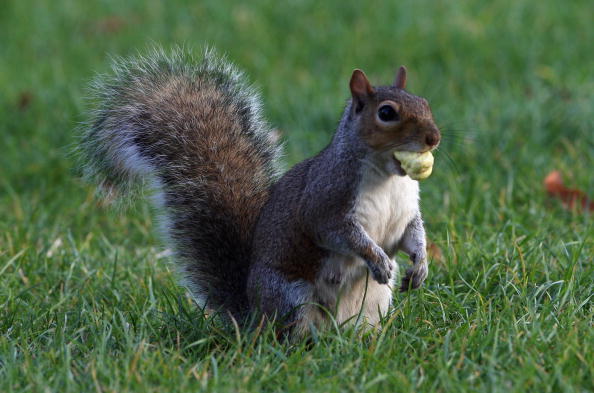 Strong Prey Drive: This does not always need go be equated as a bad thing. People hear this and then fear dogs, but that is not the case. What we are basically telling you here is something you have seen and most likely know already. If you have a Red Heeler, it will defintiely be attracted to smaller creatures. Remember the dog in the movie Up? Remember how he would randomly say Squirrel? (You have to know the movie to get the reference). Well, if you have a Red Heeler, expect him to do things like that a lot. Not actually SAY squirrel, mind you. We mean react to smaller animals they see. 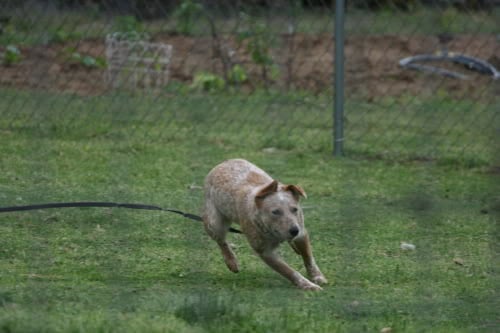 Think They Are Immortal – I know that may sound strange to read, but we have a solid explanation. They are what we like to call an overly confident dog. Maybe it from herding larger animals that they get this confidence. No one really knows. But the Red (and Blue) Heeler are more prone to get themselves hurt. This is not something we are making up. The best way to prevent this and avoid it is with strong training. Make sure the dog comes when it is called, so it is less likely to chase after something or get itself hurt in some random scenario. 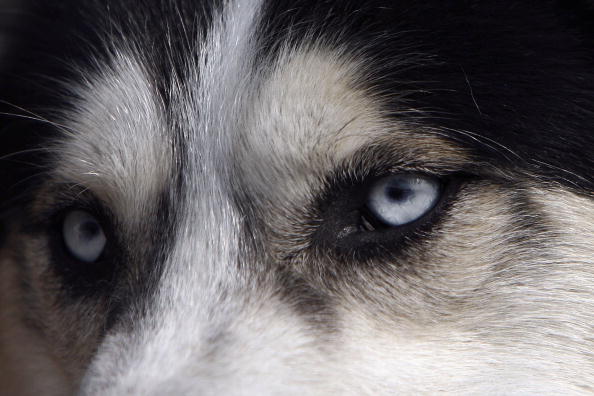 Glow in the Dark Eyes – Okay, this one sounds scary, but it’s not. It is all science. And even though I pulled you in with that bait-tastic headline, don’t let it fool you. A Red Heeler does not walk around with eyes glowing at night. However, you aim a flashlight at it at night or take a flash picture, you are very likely to see shining eyes. There is a reason for this. The glow you sometimes think you see in your dog’s eyes is light that is caught reflecting off the tapetum. Sometimes certain breeds who can be more prone to eye problems down the road will have eyes that naturally seem to reflect light more. The Red Heeler is one such breed with that trait.