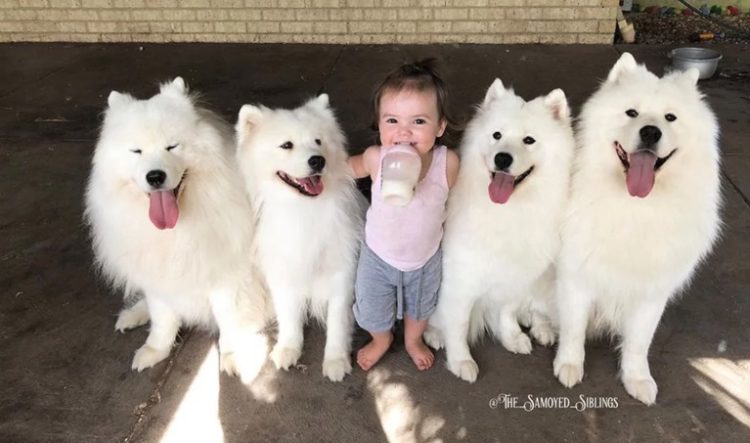 We recently learned of a heartwarming story that’s unfolding in Perth, Australia. Aaron Shaw and Sarah Hegarty are raising two daughters, ages 10 months and 1 year. While the toddler and infant are enough to keep the couple busy, they’re also raising four Samoyed pups as well. The first pair they adopted is Aurora and Arthur, both age 5, and Sebastian and Shimmer both age 1, but it’s working in their favor. The tiny little girls have formed an amazing connection with the four dogs. They’ve never known another way of life though. The dogs were there first, and the six are basically being raised together. The most interesting part of this story is that Arthur and Aurora are so patient with the toddler that they would stand still while she held onto their coats to pull herself up to a standing position.

Hegerty explained that the 5 year old Samoyeds helped their 1 year old daughter, Layla Shaw learn how to walk. She went further to say that Layla completely skipped the crawling stage because the dogs were right there to help her raise to a standing position and take her first steps. Her interaction with the dogs gave the muscles in her little legs a good workout so they were strong enough to carry her weight so she could totally bypass the crawling phase that most infants go through before they learn to walk.

It’s amazing that Aurora and Arthur knew that Layla needed to take things slowly. As Layla leaned upon their backs for support, they would pace their steps slowly and take it easy as she gained her footing. Sarah is a dog groomer by trade. She and Aaron adopted Aurora and Arthur into their homes five years ago and raised them from puppies. They took in a third pup, 8 year old Fonzi, a rescued Samoyed, but sadly, his health was poor at the time and he was past nurturing back to health. After his passing, the two dog lovers felt devastated by the loss.

A fifth family member on the way

Shortly after losing Fonzi, the couple learned that a little one was on the way. Prior to the birth, they adopted Sebastian and Shimmer, also Samoyed. Layla was born in 2016 and Hegerty had no reservations about bringing an infant into a home with large dogs. In. addition to being a dog groomer, she’s also a professional trainer. They live in a four bedroom home with ample space and the dogs are so well tempered that she knew it would be a good fit. Although they didn’t plan to adopt the second two pups, when they became available for adoption, Sarah just couldn’t turn them away. There was work involved in the training and maintenance, but for the Hegerty household, it was worth the effort.

The girls are learning too

Sarah and Andrew are also teaching the girls how to interact with dogs. The bond between Layla and the dogs is so strong that it’s common to see her resting her head on one of them, taking a nap. The patient dogs happily accommodate the little one and they’re truly the best of friends.

A House full of happiness

It’s a precious thing to see how well the dogs get on with the children, especially Layla. They watch movies together and run through the house playing happily. Layla loves them so much that she willingly takes one piece of fruit, then passes one on to Aurora. Their bond with Layla is developing into something really special.

One more coming up

Ruby is not as close to the dogs as Layla, because she’s so much younger. It’s likely that she will be though, if they have anything to do with it. Sarah said that when Ruby cries, the dogs do their best to comfort her, actually bringing toys over for her to play with, and then lying beside her.

Sarah Hegerty is doing the world a service by posting amazing photos on Instagram. It shows people how adopting dogs can change your lives for the better, even when you have small children. Many rescue dogs can be trained to fit into a family setting, and those with such beautiful temperaments, like Sarah’s four can help to make a house a happy happy home.