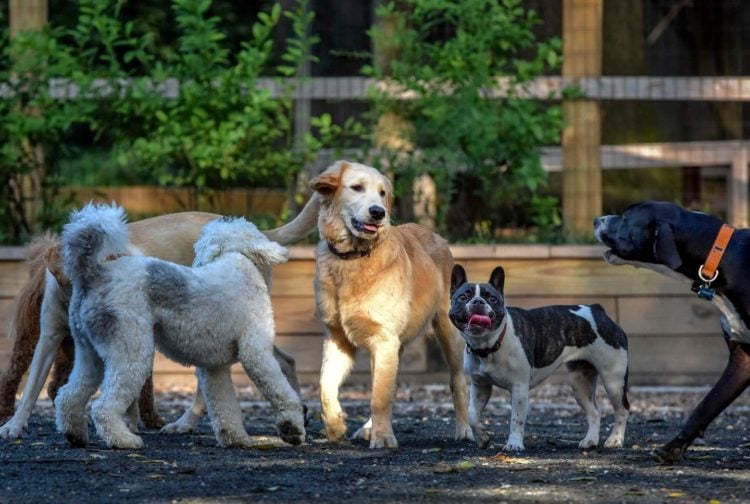 While most parks allow dogs, it is generally a condition that the dogs are kept on their leashes. This was the inspiration behind creating parks that are especially for dogs and their owners. Dog parks allow owners to let their pet pooches off their lead to run around and have lots of fun with their canine friends. These have become incredibly popular among dog lovers, and there are new parks popping up all the time. According to Dog Time, there are more than 600 dog parks in the 100 largest cities in the United States alone, with hundreds of other dog parks in smaller cities and in rural areas. Most people, including those who are not dog fans, see these parks as an excellent addition to an area as it gives dogs an area to play and keeps them away from those who do not like dogs who can then enjoy the other parks. Dog parks are not usually a problem, but there is one that has become a ‘bone’ of contention amongst locals and is even causing a divide between the rich and powerful.

The dog park in question is located in Chevy Chase Village in Maryland. This is an affluent area where the average household income is around $460,000, putting residents of this village in the top one percent of earners in the United States. Chevy Chase Dog Park was originally a muddy triangle of unused land that cost $134,000 to transform into a dog park in 2018, and it has been a popular spot for dog owners ever since. According to the Washington Post, the problems began within a month of the park opening. Some locals began to complain about the dogs barking, and the local police were receiving calls almost daily. Signs then began to appear around the park saying that barking was not allowed.

Elissa Leonard has also been the recipient of many of the complaints as she is the chair of the village board. She is married to Jerome H. Powell who is not only the co-chair of the board, but he was appointed to the United States government by President Donal Trump. However, he has recently come under fire from Trump who blames Powell for tanking the stock market. Now Powell is facing problems in his home life as well as in his career due to the local divide over the dog park. One of the main complainers is Joanie Edwards, whose house backs onto the park. She has said that she cannot sit in her garden with her friends due to the constant noise of the barking. At a village board meeting in May, Edwards was amongst the many villagers who put forward their complaints.

The following month, real estate developer Tom Bourke also put forward his opinions of the dog park. He lives just across the street from the park. He argued that it was unacceptable for residents to feel bothered in their home every day and described the dog park as a nuisance. Bourke’s wife argued that there were people turning up in cars with District plates who had no regard for the local residents. At the meetings, Leonard has sympathized with the residents but has also explained that it was not within the board’s powers to restrict access to the dog park so that only people from the immediate neighborhood can use the facility. One reason for this is because the plot of land was purchased in the 1980s using state money, which means it has to remain accessible to the public. It was already a popular spot for dog owners before it officially became a dog park. A neighborhood vote had taken place before the land was made into a dog park, and the neighbors voted unanimously in favor.

Leonard is a dog owner herself as she has a Norwich Terrier. However, her dog does not frequent the park. She has tried to keep both sides of the argument happy by applying certain restrictions to the park. Previously the park was open from 7 am. To reduce the amount of noise nuisance in the early hours, they have now changed the dog park opening time to 8 am. Another step taken is that the board have wiped the dog park from their village website. The purpose of this was to reduce the number of outsiders visiting the park and taking up parking spots used by residents. The board even decided to employ an expert to asses the situation. They hired a woman with a degree in epidemiology for $1,400 to study both human and dog behavior at the park over a period of several weeks. The researcher visited the park on 54 occasions during this time.

Her findings showed that seven dog owners arrived in their car rather than walking to the park, indicating that they were not from the neighborhood. Of these visitors, the researcher noted that one dog owner did allow their dog to relieve itself next to the street on the green space. The situation regarding the barking gave results that were rather ambiguous, which meant that no conclusion was reached. While the barking was bad enough for Edwards to put music on in her home to cover the noise and forced her to call the police repeatedly, others considered the barking minimal. Edwards has said that she does not want to become the bad guy in this situation, but that it is severely affecting her life. The retired elementary school teacher now spends her days painting and she is commissioned by many to paint their pets. This shows that she is not opposed to animals, just the noise of the dog park. She is also a former dog owner, and her last dog passed away four years ago.

The next village board meeting will take place on September 9, 2019, and those in favor of keeping the dog park are intending to food the meeting as they have heard that one potential plan is to remove the fence so that the dog park becomes a regular park. Lawyers have now got involved on both sides as the situation has escalated. When dog owners heard that a woman was considering suing the village over the dog park, they too have been in touch with lawyers to find out their rights. While this may all seem very extreme, dog barking is considered a public nuisance in many countries across the world. Law Dogs USA says that some states have specific laws around dog barking, while others have no laws in place. The regulations that are in place usually relate to the length of time for which a dog is continuously barking and if it occurs after 10 pm at night. In many states, what is considered nuisance remains a very vague subject.