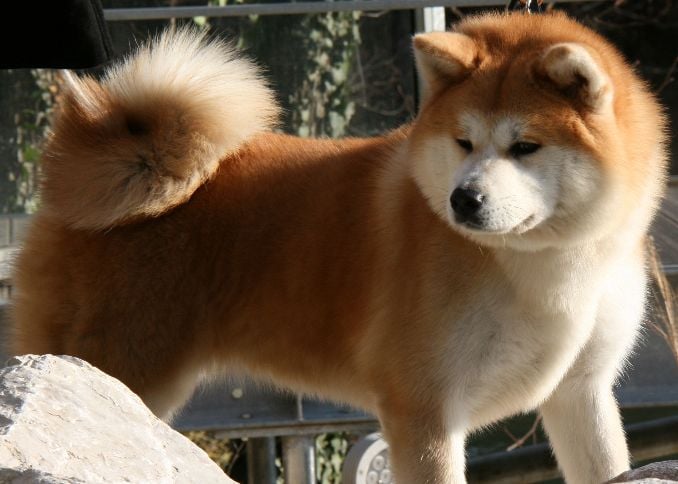 The Akita Inu is one of the most respectable dog breeds with characters that resemble the tradition of its ancestral land; Japan. Its appearance is noble and intimidating, and it is a smart dog well-equipped to handle dangerous threats. And that is not all, as there are numerous interesting facts about the Akita Inu dog breed that will leave you impressed. Here are ten interesting facts that you did not know about the Akita Inu.

1. The Akita Inu is a national treasure in Japan

The Akita Inu’s noble appearance and character made him so popular with the Japanese that it was designated a national treasure. In fact, the breed was regarded so highly that its ownership was restricted only to the imperial family, and dogs belonging to the rulers were treated as royalty. What’s more, the Akita Inu is of great spiritual significance to the Japanese that every newborn is presented with a statue of it to symbolize long life, health, and happiness.

2. There are two types of Akita Inu

Although the Akita Inu is native to Japan, there is a newer type of the breed designated for America. This new type is as a result of breeding projects. The two types have many similarities in looks and behavior, but they also differ in several aspects. To start with, the American type tends to be smaller and lighter than the Japanese type. Additionally, the American type allows for a black mask while the Japanese type does not. In spite of being recognized under American standards, the American Akita is not considered a part of the original breed in Japan and Europe.

3. It was first brought to the U.S. by Helen Keller

The first Akita Inu to set paw on American soil belonged to Helen Keller, the famed political activist and blind author. He was introduced to the country in 1937 and has been popular with many people since. According to Helen Keller, he was attracted to the dog by the legend of Hachiko, a loyal dog who waited by the train station for nine years in hopes that his dead owner would come back.

4. Its size is imposing

The Akita Ainu have always been used as guard dogs owing to their imposing size. Both males and females can grow as tall as 26 inches and weigh up to 100 pounds, making them effective for tackling intruders. In addition to being big, their sleek appearance and calm temperament makes them look noble, making them ideal family dogs especially for the upper class. Puppies, however, tend to be just as small as other breeds when young, but they grow quickly. To this end, many people not familiar with the species get a shock once their once-tiny puppy grows into a 25-inches tall dog.

5. They can easily become aggressive

The Akita Inu is fairly calm and obedient. However, it is naturally defensive and aggressive, and certain threats easily instigate confrontations. These dogs are especially threatened by the presence of other dogs, but strangers may also become a problem when they cross certain boundaries. To this end, the dog should always be kept under leash when in public places such as the pack or else it may become a problem containing a fight considering its size. It is also important for the dog to take training classes when still a puppy to instil discipline, obedience, and loyalty.

6. They are mostly calm and quiet

The Akita Inu has a calm demeanor to complement its noble appearance. These dogs do not bark often unless they threat a threat or are joyous. Consequently, barking should be taken seriously and investigated as these dogs have very good instincts. Additionally, in spite of their big bodies, these dogs tend to be calm and inactive most of the time. However, this quickly changes when they feel threatened.

Like every other dog breed, the Akita Inu is loyal to its owner and relies on its master’s guidance. However, this breed is somewhat stubborn at times and likes asserting its dominance. If unchecked, the dog can become defiant and start showing elements of indiscipline. In fact, these dogs may become aggressive if they sense that they are being treated unfairly; one interesting observation about these dogs is that they consider eye contact as aggression. To this end, training is necessary while the dog is still young or else it may be difficult to tame it as desired once it is fully grown.

This breed of dogs is very possessive with almost everything: its food, its owner, and even its living space. To this end, they do not relate very well with other pets especially if they are smaller. The dog’s natural instinct kicks in when it notices smaller animals, and they mostly end up as prey. As such, the dog is recommended for homes that do not house other pets such as cats and hamsters. However, with the proper training and having been raised alongside other pets, the Akita Inu may be tolerant of other animals; this, however, may be only to a point.

9. They are family dogs

In addition to being a good guard dog, the Akita Inu is also an ideal family pet although it does come with several shortcomings. Once used to the environment and their owners, these dogs integrate into the family and are very gentle and loving with their owners. They especially like to cuddle, and they are very tolerant to even the most playful kids. However, one has to be very patient to own this dog because, as mentioned earlier, it is an alpha dog that at times likes being in control.

The Akita Inu is a very hardy dog that will adapt to most environments, but it prefers the winter and loves playing with the snow. Many Akita dog owners have made an interesting observation that their dogs tend to become increasingly active as winter sets in. they like to spend much of their time outdoors hunting small games or just playing in the snow.