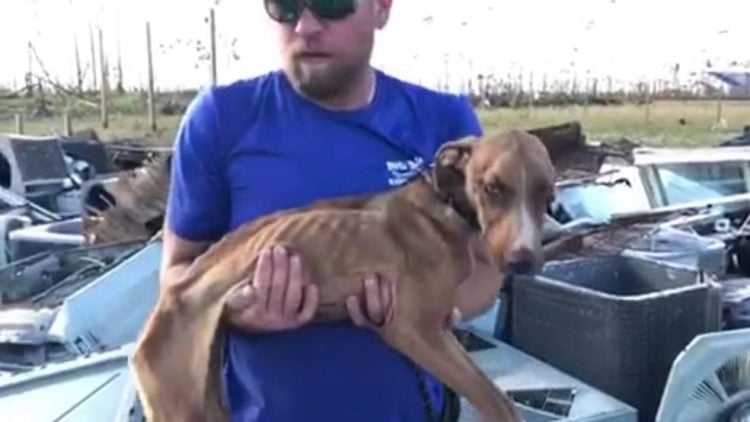 A dog that was rescued in the Bahamas, three weeks after Hurricane Dorian hit, has been aptly named Miracle by the people who rescued him. He was found under some rubble where it was believed he had been for at least three weeks. Hurricane Dorian was the worst natural disaster in history to strike the Bahamas according to Wikipedia. More than 70,000 people were left homeless. The death toll currently stands at 60, but this is expected to rise as over 400 people are still missing. There are many stories to come from the islands of people who watched their beloved pets swept away by the flood water, and the feelings of hopelessness as they realized there was nothing they could do to reach them.

It is estimated that just as many animals have been killed by the hurricane as people, if not more. There are still many animals that are missing and as time passes, the hope of finding them alive starts to fade. This is one of the reasons that Miracle being found has bought such hope to people on the islands that are still searching for their pets. If he survived, then there is a chance that there are other survivors as well that are just waiting to be found.

The discovery of Miracle was made by the search and rescue team of Big Dog Ranch. The team used a drone with infra-red technology to fly over collapsed buildings in Marsh Harbour on the Abaco Islands. This allowed them to pinpoint the specific area where the Miracle was trapped, which allowed them to concentrate the rescue attempt in the right area. The dog was buried under an air conditioning unit that had fallen when the hurricane hit. Big Dog Ranch was founded by Laurie Simmons, who was delighted to find that Miracle had survived after being trapped for so long. Sadly, there was another dog who was trapped alongside Miracle that had already passed by the time the rescue team found them.

Simmons is also the president of Big Dog Ranch, which is based in Loxahatchee Groves, Florida. However, they take on search and rescue operations all over the country, as well as overseas territories such as the Bahamas. They have been working in the area since Hurricane Dorian first hit and in this time have rescued over 138 dogs. Many of these dogs have since been reunited with their owners. According to the official site of Big Dog Ranch, they have saved the lives of almost 30,000 dogs since they first opened. The shelter does not keep their dogs in cages and they will never put a healthy dog to sleep if they cannot find them a home.

The teams use the drone to detect a heat signature under the rubble of buildings that have collapsed. Once this has been detected, then the teams will start to dig through the rubble. It is not uncommon for dogs to stay hidden underneath buildings that have collapsed even when the hurricane is over because they get scared of the noise of the heavy machinery that is used in the clean up. They feel safer in enclosed spaces and so many of them just stay put, even when they can hear human voices close by.

The team received a tip off that there may have been an animal trapped and contacted Simmons to request that a drone was sent to that location. The drone arrived within the hour and the dog was able to be located and rescued. He was soon given the nickname Miracle because no one could quite believe that he had managed to survive for so long on his own without any one else there to take care of him.

After he was rescued, Miracle was checked over by a local vet who gave him some fluids and a small amount of food. Apart from being emancipated, otherwise he was in good health.It didn’t appear that he had suffered any serious injuries when the air conditioning unit fell. He was soon given clearance to return to the United States where he will be cared for until he makes a complete recovery. In the meantime, every effort will be made to find his owner. If his owner is not found, then he will be rehomed with a family that will be sure to give him all the love and affection that he needs.

Simmons believes that the fact Miracle was found alive and well after all this time should give everyone hope that there may still be pets out that who are missing that could still be found. People will be doing all that they can to find their own pets, but it is reassuring to know that there are other organizations that are also working hard to try and reunite missing pets with their owners.

Buzz Feed News reports that Hurricane Dorian has meant that hundreds of animals have been separated from their owners. The storm also caused a lot of damage to an animal shelter on one of the islands. Staff at the Humane Society of Grand Bahama were forced to climb into the ceiling of the shelter until all the water had subsided when the building was hit by a storm surge. Unfortunately, they were not able to save all the animals that were in the shelter at the time. As the shelter was inhabitable after the storm, all the animals that survived had to be flown to other shelters in the United States. The staff from the shelter are working as hard as they can to get things up and running so they can take in animals that have been displaced from the hurricane.

Hurricane Dorian bought so much devastation to the islands of the Bahamas and it is going to take years before things get back to the way that there were. The human cost is unimaginable, with tens of thousands of people who have lost everything. This has been the focus for most of the media reports and so the story of Miracle helps to show that there is still some hope after so much upheaval.