Bruce was dressed in his wedding tux the day that Estelle and Danny Harris married. The muscular Bullmastiff looked dapper in his black tie as he posed proudly next to lovely Estelle in her wedding dress and Danny in his matching wedding tuxedo. Bruce was dying from cancer, but he managed to be in attendance. For Estelle and Danny, Saturday, January 26th was not only their wedding day, but a very important memory made with Bruce.

Their wedding had been scheduled for May. Danny and Estelle had been planning a wonderful wedding for springtime. But Bruce started in with breathing problems in December. His tongue had turned blue and his gums were white. The couple rushed him to the hospital for evaluation. His blue tongue and white gums were the signs that he wasn’t having enough oxygen in his system, but those symptoms were only the tip of the ice burg. The veterinarians started draining fluid which had built up around his lungs and his heart. They were trying to reduce a pleural effusion, hoping to save his life.

A pleural effusion is a build-up of excess fluid which occurs between the thin membranes in the lungs and chest cavity called pleura. Normally, they help to keep the lungs lubricated and help with breathing. But when there is too much fluid it means that something worse is happening inside the body. Unfortunately, while draining the pleural effusion, the vets found a lump in Bruce’s chest. The lump had reached grapefruit size, and vets told Estelle and Danny it was probably cancerous. Even worse, the vets told the couple that Bruce probably wouldn’t survive the operation to remove the huge lump. They were given time to say goodbye.

The surgery lasted a grueling seven hours. The vets had to remove several of Bruce’s ribs while taking out the lump, but he made it through surgery. That lump turned out to be a highly aggressive cancer called hemangiosarcoma. Hemangiosarcoma is a deadly type of cancer which begins in the endothelium (the single layer of cell tissue lining various cavities and organs in the body) and then invades the blood vessels. It is found more commonly in dogs than in any other species. The vets expected that Bruce might only live for one to four months after the surgery. 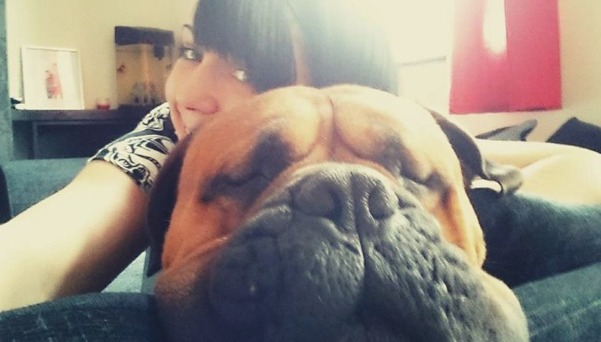 With that terrible news, Estelle and Danny knew that their May wedding day wasn’t important to them any longer. What they really wanted was to have Bruce with them on the day. They quickly decided to be married just three weeks after Bruce’s diagnosis. Unfortunately, changing the date meant that some of the guests invited wouldn’t be able to be there. It also meant that the deposits and payments they had made in advance for the wedding were lost. But it gave them a chance to have Bruce there.

Estelle and Bruce had been together for five years already. Estelle had adopted him when he was just an adorable puppy. He was eight weeks old when Estelle brought him home to be her “four-legged kid”.

Estelle, who is 34, has known her “Brucie” longer than she has known Danny, who is 32. Estelle couldn’t imagine getting married without having her “child” present. The Derbyshire, U.K. couple agreed that having Brucie there was more important than having their dream wedding. They re-arranged all their plans. Estelle’s aunt and cousin took over the duties of preparing finger foods to serve their guests. The couple were married at the Burton Registry Office. They were sad that many guests couldn’t be there.

It was the most difficult to explain that Estelle could love Brucie so much that she would want to change her perfect wedding for a rushed event. But Estelle said that Brucie has always been much, much more than a dog to her. Her love for him, and knowing that he is dying, has broken her heart. The only thing she could think to do was to “make memories” with him. So that’s what she and Danny set out to do.

With Estelle, Danny and Brucie dressed in their wedding finery, the three of them made wedding memories and took photographs to remember the day. Brucie only stayed at the party in the evening for about an hour. Once he got tired, he went home to sleep. Estelle believes that he truly enjoyed being at the wedding. Brucie got lots of compliments about how handsome he looked in his fancy tuxedo.

Estelle and Danny are doing their best to keep Brucie comfortable. The vets have changed some of his diet and he seems to be doing quite well right now. He’s lived two months of the possible four which the vets said he might have. Brucie and his parents are sharing love and continuing to make memories together as long as possible.