Located in Texas, Huntsville is a city that lies 70 miles north of Houston and is home to around 39,000 people. It is also home to Sam Houston University and the Texas State Penitentiary. The most typical route into the city used by visitors is Interstate 45. As you travel along this road, you will notice a huge statue of Sam Houston, who is a famed statesman. You may also see some warning signs advising visitors not to pick up hitchhikers as there is a risk that they are escaped prisoners from Texas State Penitentiary. Despite the warnings not to pick up strays, I Heart Dogs says that this something that a local animal shelter has been doing for years. However, in this case, the strays are not escaped prisoners but abandoned and neglected dogs.

For the last 30 years, St. Francis’ Angels have been finding strays on the streets of Huntsville and the surrounding area. They have taken the stray dogs into their care and restored them to good health before finding them a forever home with a loving family. Although there have been many heartbreaking cases that have come through their doors over the last three decades, there are some stories that are particularly memorable and stand out from the others. 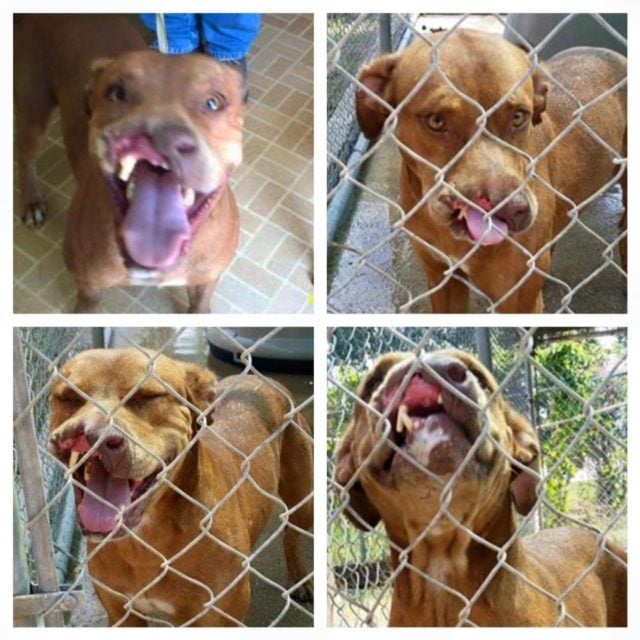 Co-founder Anne Graber was particularly affected by the story of Bjarni. This poor dog was found abandoned and wandering the local streets. He was also in a terrible condition as he had been badly injured. His rescuers do not know what caused his injuries, but their nature suggests that he was viciously attacked by another animal. He had part of his nose missing, and some of his face and lips were also gone. Bjarni’s teeth were crooked and misplaced, and he was clearly having trouble breathing and feeding. The staff from the shelter were able to track down Bjarni’s family. However, they refused to take their dog back because of his injuries. Graber was distraught and took matters into her own hands. She was determined to improve the dog’s life and set about finding someone who could treat his injuries, though she wasn’t sure if this was even possible.

She contacted many animal hospitals and clinics that were in her network, hoping that someone would help her out. Finally, she was contacted by the Gulf Coast Veterinary Specialists. They said that they could help and that they were willing to perform the surgery he needed to correct his facial disfigurement. Unfortunately, this was a costly procedure, and neither the shelter nor the vets could afford to cover the cost. Instead, the group made a plea via the St. Francis’ Angels Facebook page, asking for help to raise the money for the surgery. The response was overwhelming as many people came forward to donate. Soon, enough funds had been raised for the surgery to go ahead, which was all thanks to the kind-hearted animal lovers who had donated to his cause.

The veterinarian who performed the surgery was Dr. Jason Balar from the Gulf Coast Veterinary Specialists. This wasn’t just a cosmetic procedure, it was life-saving surgery. He performed a complicated procedure that realigned Bjarni’s face and moved skin forward to create structure in the areas of his face that were missing. His disfigurement is now less obvious and, more importantly, he is finding it much easier to breathe and eat. Although Bjarni still has a slight facial disfigurement and his teeth are far from perfect, the dog is completely unaware of his limitations, says Graber. She has described him as an energetic, vivacious, and engaging dog. He is happy, loving, and a pleasure to be around. Following his surgery, Bjarni needed some time to recover. Fortunately, the staff and volunteers at the shelter were on hand to give him all the love and care he needed. As the surgery had involved removing his right upper canine and cutting into the tissue surrounding his mouth, he could only eat small, soft meals in the first few weeks. He also needed lots of rest to recover fully. Thankfully, his recovery progressed well, and he was soon ready for the next stage in his journey; finding a forever home. The staff was hopeful that he would get adopted soon after being added to the adoption list because of his great personality. They believed he deserved a fresh start in life with a family that would love him after he had experienced such a significant trauma and then been rejected and abandoned by his former family.

The staff’s predictions were true, as Bjarni now has a fantastic new family. The adoption process took a little longer than the staff had expected, but at least he is now living in the type of environment he deserves. He has been adopted by a couple who already had a dog at home. This means that not only did Bjarni get two loving parents, he also got a sibling to play with and cuddle up to in his new home. To mark his fresh start in life, his adoptive parents decided to give him a new name. They decided to call him Hogan.

Finally, Hogan is enjoying a fantastic lifestyle where he is warm, cared for, and loved. This is a stark contrast to the life he was living on the streets of Huntsville when he had suffered terrible injuries, was suffering in pain, and he had nobody to give him love and attention. The two lives this dog has experienced are at completely opposite ends of the spectrum. Garner is absolutely delighted that this dog’s surgery went so well and that he now has a forever home. It is one of the rescue stories that will stay with her forever. He was one of the most tragic rescue dogs she had seen, so she is so pleased that his life story is one with a happy ending.