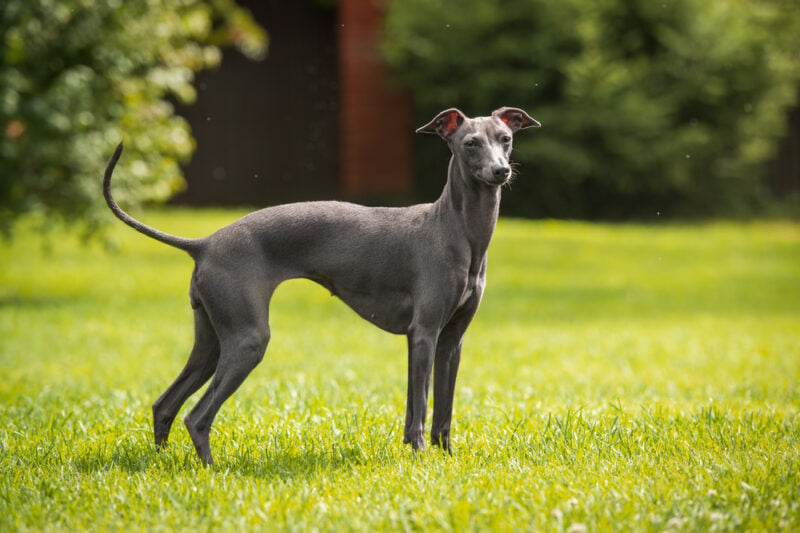 Greyhounds are popular for being the fastest dog breeds in the world. They are also among the oldest domesticated dog breeds in history, with historians tracing their ancestors to Persia, Egypt, and Ancient Greece almost 4000 years ago. Throughout history, Greyhounds have served as companions for royals, entertainment pets, racing dogs, and hunting dogs. Today, they make excellent house pets for families looking for loyalty and love from a furry friend. But did you know there are several Dogs Similar to Greyhounds? Here is a list of the 10 most popular. 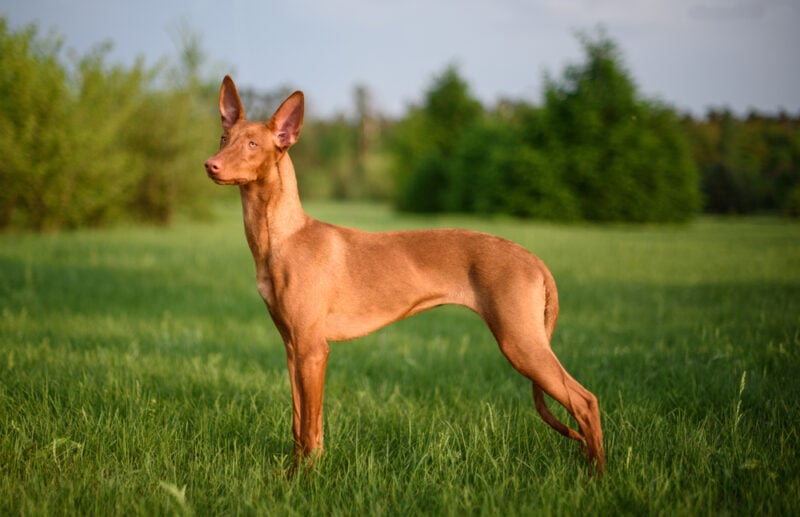 As the name suggests, the Pharaoh Hound can trace its history to Ancient Egypt. Hieroglyphics from the era depict this dog as a constant companion to the gods and Pharaohs. In fact, Anubis, the jackal god, looks so much like the Pharaoh Hound that some historians believe the basis was the Hound and not the Jackal. Over the years, the Pharaoh Hound has shed their ancient roots to become an excellent family pet. They are the official dog breed of Malta. 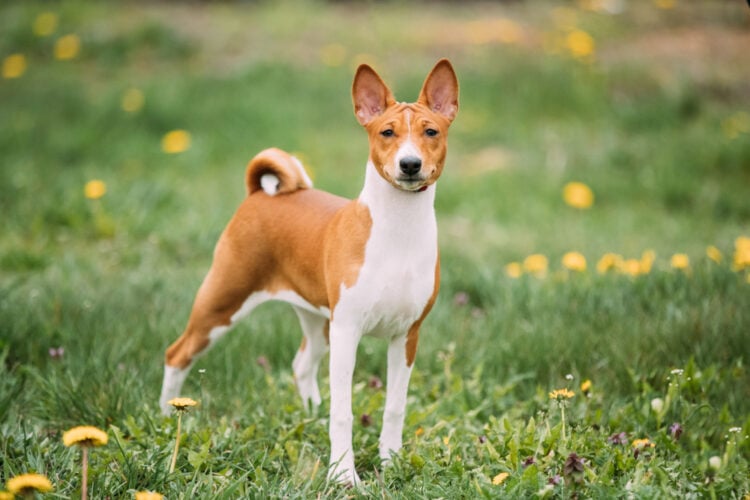 Basenji dogs are the most compact sighthounds around, having denser, shorter bodies than their cousins. But what is most unique about these dogs is that they do not bark – at least not in the traditional sense. Their “bark” can be described as a sound between a chilling scream and a yodel. Basenjis are also very independent and don’t mind being left alone for extended periods. This makes them great pets for busy dog owners. 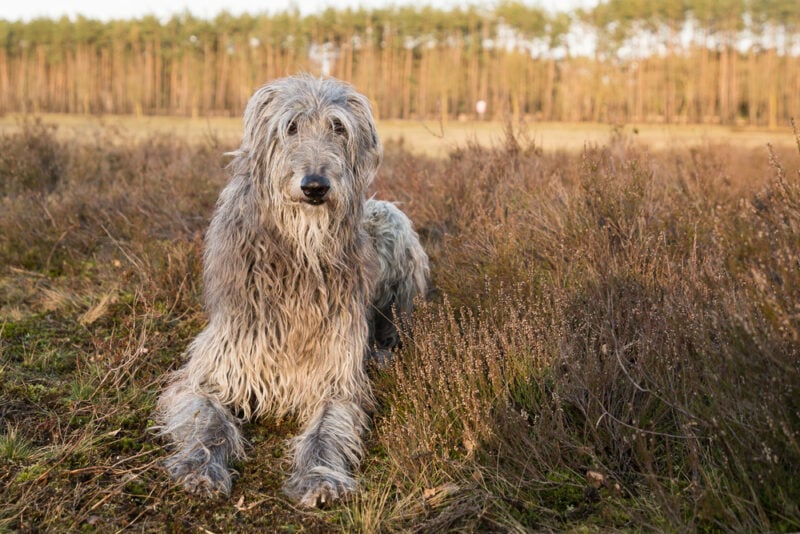 The Scottish Deerhound is often simply called the Deerhound. In terms of size, these dogs are in the larger category, with males typically weighing up to 110 pounds. They are also very tall, and a fully grown deerhound stands at 28 inches at the shoulder – some are taller. Additionally, Deerhounds are very high energy and thrive in places with wide open spaces, making them unideal for apartment living. As the name suggests, Scottish Deerhounds draw their roots from Scotland. They were originally bred to hunt stags and wolves in the Highlands during the 1500s. They were also owned almost exclusively by nobility, and this, combined with their muscular and athletic bodies, led to them being nicknamed the “Royal Dog of Scotland” – a name that carries on today.

Deerhounds are generally very loving and will get along with everyone, including strangers. They get along with kids and other dogs, but they do not make good watchdogs. Generally, they have a life expectancy of between 8 and 11 years. Greyhounds can be very lazy and love to be couch potatoes. They can also be aloof and stubborn during training so consider getting training help if you are a novice dog owner. 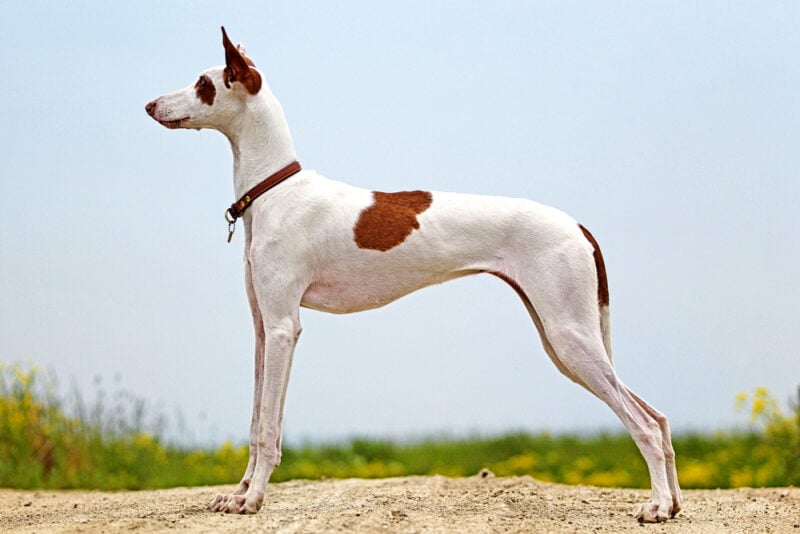 The ancestry of Ibizan Hounds can be traced back to circa 3400 BC, when they were first brought to the Island of Ibiza (as Egyptian Hounds) by Phoenician traders. They stand out for their wide, perky, upright ears, beautiful red and white coats, and striking resemblance to Greyhounds. Although they were originally bred to hunt rabbits, they make wonderful family pets. Ibizan Hounds are not overly affectionate, but they love to snuggle and are very silly and playful. They are very athletic and fast – as are all sighthounds – and will love a home with energetic kids. Generally considered medium-sized sighthounds, these dogs weigh between 45 to 50 lbs. and stand between 22 and 27 inches tall. They can live for up to 10 to 14 years. Despite being high energy, Ibizan Hounds are low maintenance when it comes to exercise. They can do well on one or two 20 to 30-minute walks a day. 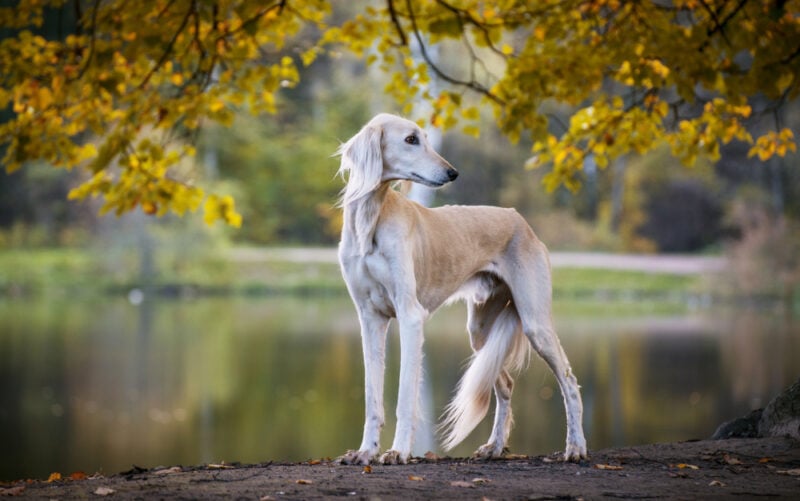 The Saluki goes by many names, including Persian Greyhound and Gazelle Hound. It is one of the oldest dog breeds in the world, and its ancestry can be traced back to the beginning of human civilization in the Middle East’s Fertile Crescent region. According to legend, the name Saluki is derived from a Sumerian phrase that means “to plunge earth” because the dogs were thrown towards prey by hunters riding on camels. The oldest Sumerian rock carvings of these dogs date back to 7000 to 6000 BC. Salukis are regal and were often used to hunt hares and gazelles. In some instances, they worked with falcons to hunt prey. The typical Saluki weighs between 35 to 70 lbs. and stands between 23 and 28 inches tall. Besides their hunting nature, these dogs are very affectionate and loyal. They are, however, very independent and not highly affectionate.

The high-spiritedness and hunting instincts of the Saluki make them very prone to chasing small animals like squirrels and cats. They can reach speeds of up to 30 to 35 miles an hour, so you should always keep them on a leash when outside. Additionally, Salukis are a little shy and quiet and will enjoy the company of older kids more than younger, more demanding kids. 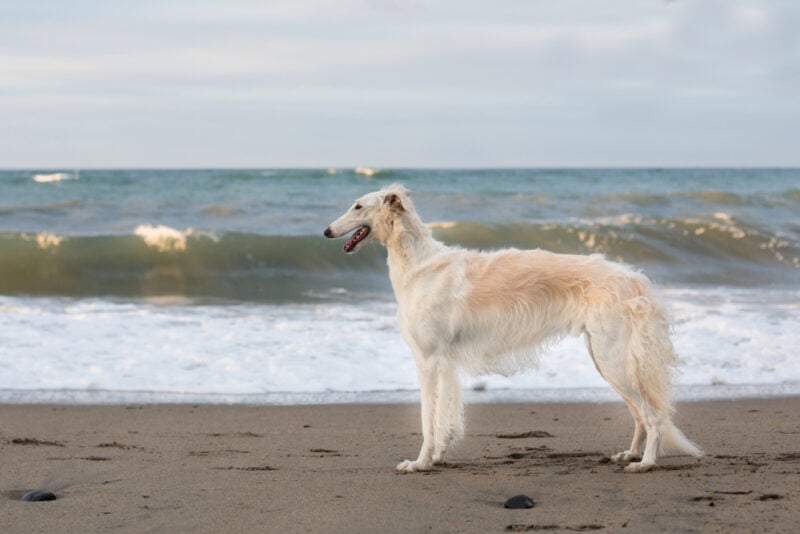 Like the Afghan Hound, Borzois are often called long-haired Greyhounds. These large sighthounds are originally from Russia, where they were used for hunting wolves and were previously called Russian Wolfhounds. Despite this ferocious task, Borzois are very loyal and respectful towards their owners. They are also very graceful and affectionate and get anxious when left alone for long periods. First bred in 1650, Borzois were often owned by nobles. Some nobles owned hundreds of these large sighthounds and used them to flush out game. During their world-hunting training, Borzois were taught to capture, pin, and hold down wolves until their owners arrived.

Like Greyhounds, Borzois are designed for short-distance running. They are couch potatoes and will usually pick a favorite spot in the house and lounge in it for hours. Considered large dogs, they typically weigh between 55 to 105 lbs. and stand between 26 and 32 inches tall. They live for 10 to 12 years. Borzois have a stunning double coat designed to keep them warm during the harsh winters in Russia, where they were bred. They do not get along with smaller animals like cats due to their strong prey drive and are more suited to homes with older children. Due to their large size, they could accidentally hurt younger children during exercise or play. 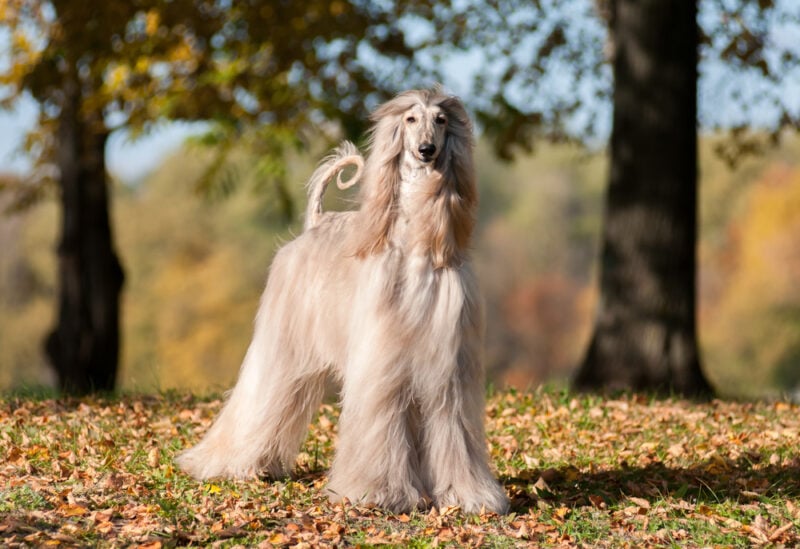 Thanks to its elegant long body and long luxurious coat, the Afghan Hound is one of the most popular and eye-catching dog breeds, as the American Kennel Club notes. It looks like a long-haired greyhound and is one of the most playful sighthounds, making it a perfect pet for kids. Originally called Tazi, Afghan Hounds were first bred in Afghanistan’s deserts and mountains to hunt large animals. They resemble the Greyhound in size and build. Afghan Hounds were bred for their courage and ability to run fast over long distances, unlike other sighthounds that are more suited to short-distance running. They hunted large prey, including leopards, and were trained to hold the prey until their owners arrived.

Eschewing its hunting background, the Afghan Hound of today is a loved and cherished family pet. They are not overtly affectionate, however, and have been known to pick a favorite in the family. This is why they are considered one-person dogs – there will be no doubt as to who their favorite person is. That said, Afghan Hounds are clowns and like to be silly and play around. They may steal items from a family member to initiate fun games, often opening drawers to take personal items. Thanks to their long coats, they require a lot of grooming. You should brush them daily and have them professionally groomed once a month to avoid excessive shedding. Afghan Hounds maintained some of their strong hunting instincts and are prone to chasing or conflicting with smaller animals like cats. They may not get along with other pets. 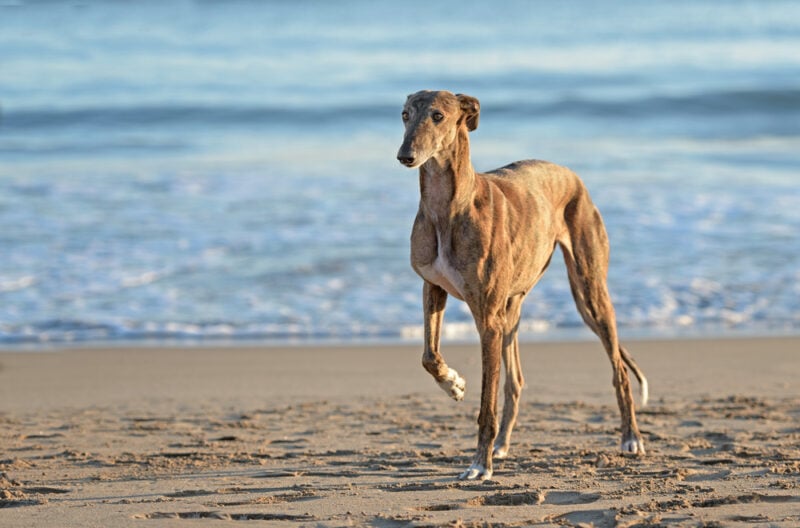 Spanish Galgo weighs between 50 and 65 lbs., stands between 24 and 27.5 inches tall, and can live for up to 10 to 13 years. They are very friendly and suited to apartment living, as long as you provide them with a lot of exercises. After a good run, Galgo will be happy to lounge on the couch all day. These dogs have short-haired coats, which can be black, red fawn, or brindle, and need brushing once a week. 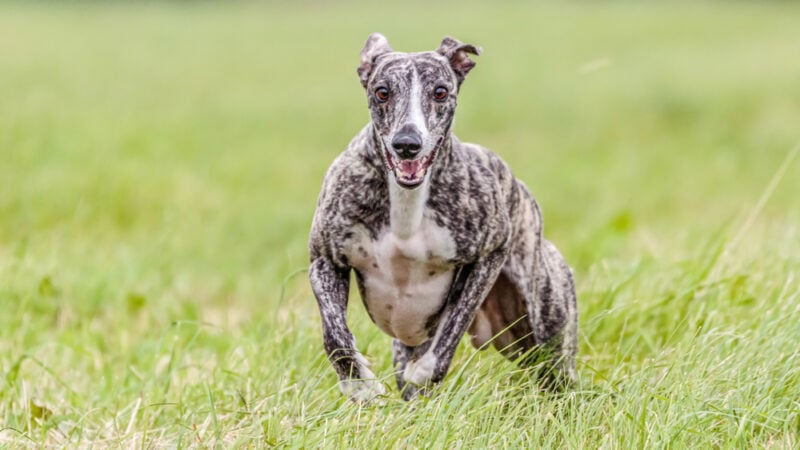 Compared to other breeds on this list, Whippets are a relatively new breed. They have only been around for about two centuries, having first been bred in the 1700s in Northern England. Breeders crossed the classic Greyhound with long-legged terriers to create the small and fast Whippet. Sometimes called the poor man’s Greyhound, these dogs are smaller than their counterparts, elegant, and powerful. A typical Whippet weighs 18 to 48 lbs., stands between 18 to 22 inches tall, and has a life expectancy of between 12 to 15 years. They have short, dense coats that are easy to care for and appear in a wide variety of colors. When it comes to grooming, you only need to brush your Whippet once a week and give them a bath once a month and when they become dirty or smelly in between.

Whippets are very gentle and affectionate and get along well with people and other dogs – they are considered to be one of the friendliest sighthound breeds. However, they can be shy if not socialized from an early age and are generally aloof to strangers. They are also relatively quiet and rarely bark. 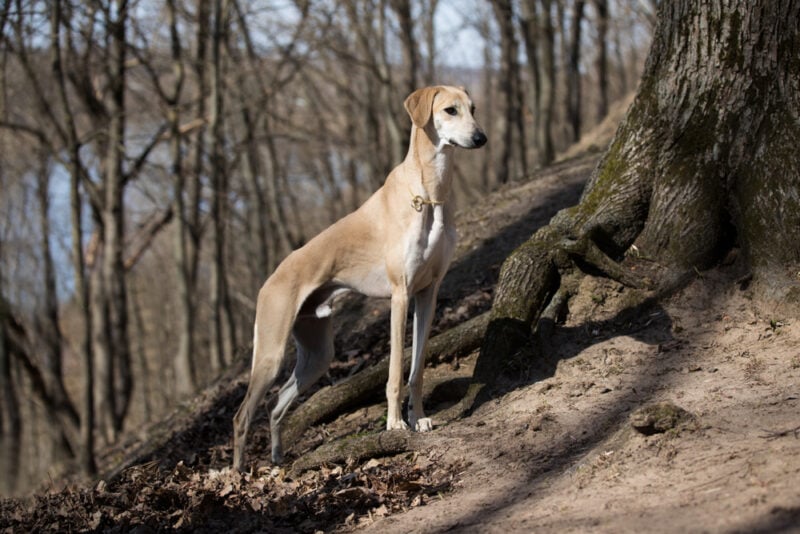 Also called the Arabian Greyhound, the Sloughi is a close descendant of the traditional Greyhound. It is believed that these dogs came into Europe after crossing the Alps with general Hannibal. They were previously used in popular hunting games in deserts in North Africa. With a striking resemblance to Greyhounds, the Sloughi has long legs and a lean body. They weigh between 50 to 63 lbs., stand between 24 to 29 inches tall, and have a life expectancy of between 12 to 16 years. They are also very energetic and require a lot of daily exercises. Nonetheless, once they run their laps for the day, Sloughi are happy to sit on the couch.

Sloughi dogs are moderate shedders, so you will need to brush your dog once a week and groom monthly. They do not drool a lot, which is great news for your furniture and carpets. Although they are wary of strangers, these dogs are very loving and affectionate with their families. They get along well with older children who know how to interact with dogs. Overall, Sloughi dogs are stunning and great pets, but they are also very stubborn. This makes training them a herculean task, which is why they probably don’t make great companions for inexperienced pet parents unless you can get help from a professional trainer. 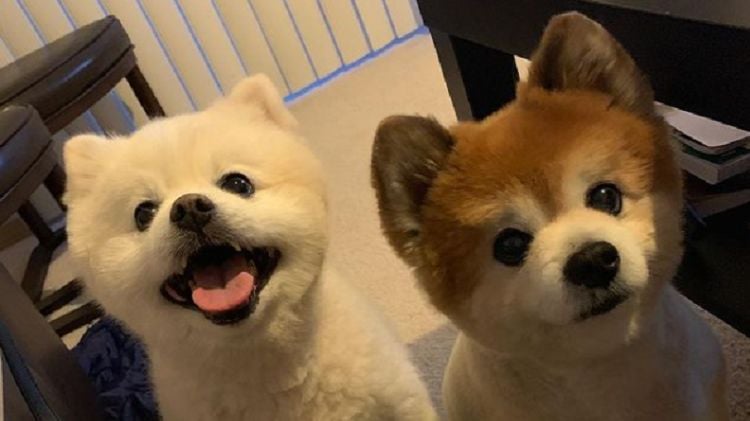 The Pomimo is a designer dog. Given its name, it should come as no surprise to learn that it is the product of the union between a Pomeranian and an American Eskimo Dog. Thanks to… 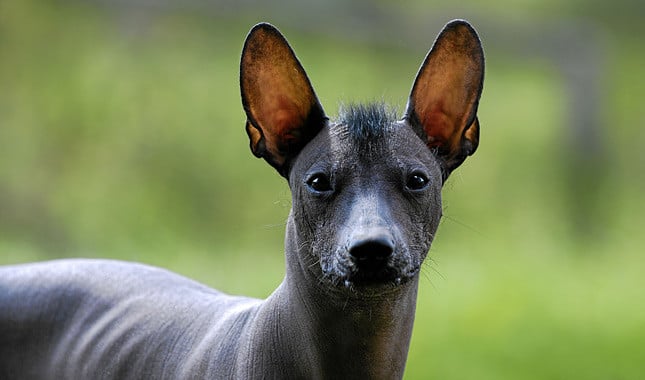 Dogs come in many shapes and sizes. From tiny teacup Chihuahuas to giant Great Danes, they display a variety of traits that reflect their purposeful breeding or natural tendencies. With the distinct dividing lines between… 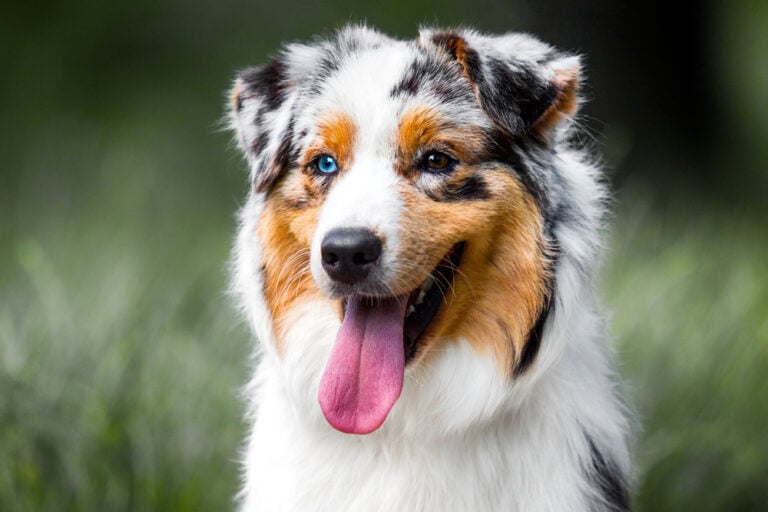 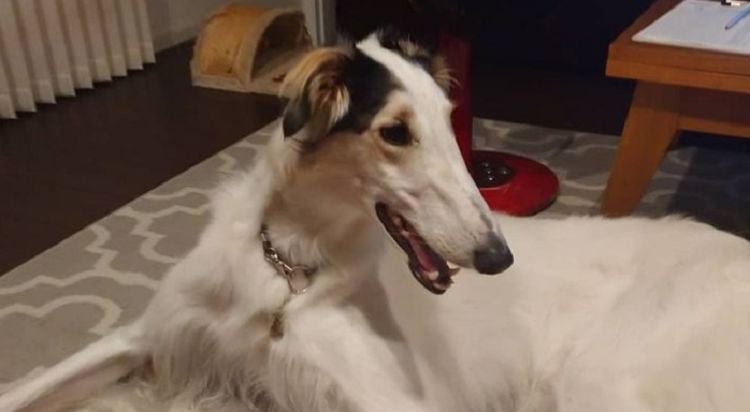 Due to each dog breed’s different personality traits, physical characteristics, and needs, not every dog is suited to every person or family. To make sure you choose the right breed, you should do some research…

There are many different large dog breeds in the world today. These heavy framed working dogs, have helped us humans achieve many great things over the years.  From heading sheep to protecting our families, these… 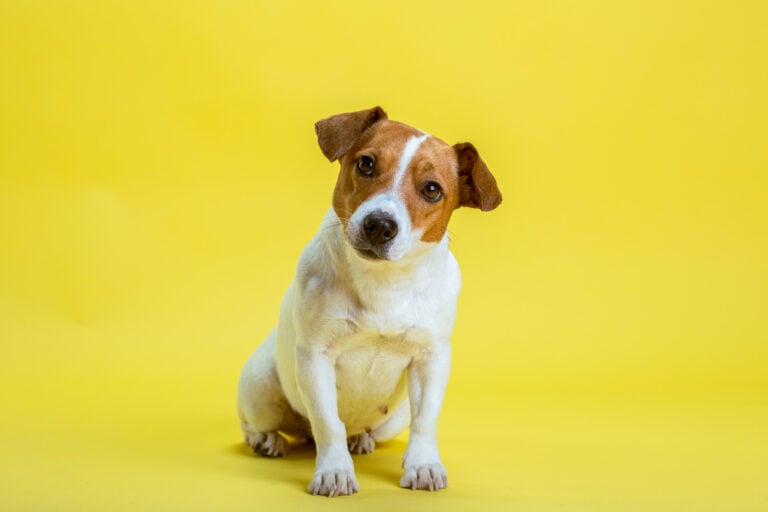 Small dogs make popular companions. After all, they are more convenient to own than their larger counterparts, thus making them better-suited for a wide range of interested individuals. Jack Russell Terriers are an excellent option…