The idea of a seeing eye dog brings a number of canine characteristics to our mind. Dogs can see well, they’re intelligent, and they can sense both movement and danger in their surroundings. With that goes something that can be both an advantage and a disadvantage – they are lower to the ground so they see the world from a different view.

Underneath all of this is the question, what exactly do dogs see? There are some common misperceptions of a dog’s eyesight, such as they cannot see color (actually, they can). Along with this are some obvious things that we tend not to think much about when it comes to what dogs actually see. Follow along and learn the realities of what dogs can and cannot do with their eyesight.

The first idea you need to detach from is that dogs are like humans in that are heavily dependent on their eyesight. If you bring any new object to a dog, the chances are they will sniff it before anything else. It’s not that the dog doesn’t see the object, but it will get its general impression of the object from its sniffer. Hearing is a close second. Anyone who uses a chain leash to walk their dog knows that just by the sound of the chain your dog will be excited beyond description.

This makes a dog’s eyesight connected to their other two major senses. They can navigate their surroundings by sight, but research has demonstrated that there are other, non-visual ways, they find their way around. When you give a dog a command, they may pick their head up and look at you, but the chances are they are being directed by the sound of your voice and the direction it is coming from.

Consider where your dog’s eyes are located on their head. They’re not directly frontal, but off to the side a bit. You can also look at a bird’s eyes which are really off to the side. This gives the dog a wider field of vision, about 270 degrees compared to our 180 degrees. Their peripheral vision is not as critical a factor because of this. 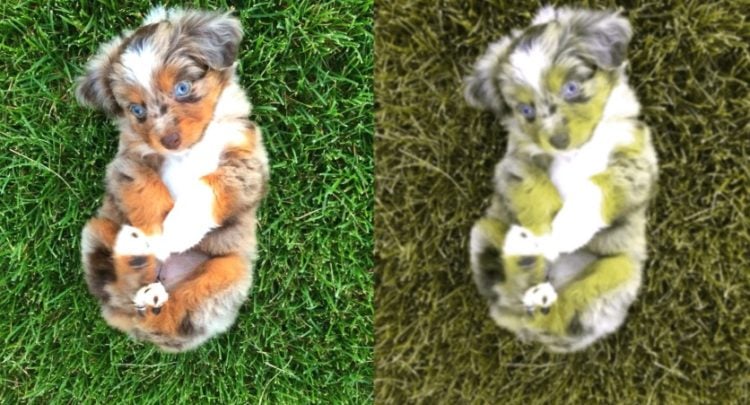 Dog owners know that there will come a time when they will get into a staring contest with their dog. But it’s not an alpha male thing to the dog because it is hard to know exactly what they are looking at. This is due to construction of their eyes which has less of a white area than humans. So if you think you’ve won that staring contest, rethink things. The dog may have their focus directed elsewhere that you won’t be able to tell.

When humans get dust or dirt in their eye, they tend to lose sight or tear up in an attempt to get rid of the debris. Dogs rarely have this problem as an important part of their eye anatomy, the nictitating membrane, acts as a constant windshield wiper for their eyes. This makes almost every dog a seeing eye dog in a dust storm!

Do some dogs see better than others? Actually, yes. There are two types of light receptors in the eye – rods and cones. The rods detect motion and shades of light and darkness. The cones add to the basic image by increasing detail and enhancing color. The total quality of an image will depend on the concentration of the groups of cones and rods. The wider the area, the better the dog sees. Longer snout dogs have a wider area, thus they see better in a relative sense. Ask yourself how many Pug seeing eye dogs you have come across.

This brings us to the oft discussed about whether dogs can see color. This also has to do with rods and cones. Because dogs have more rods than cones compared to humans, they cannot see the range of colors humans do, but they do see color. Their color spectrum is primarily yellows and blues. Green grass appears yellow to them, and yellow appears yellow, so if you wonder why they sniff around the grass it has more to do with them understanding their environment that having an odd attraction for urine. But this big difference in rods and cones also allows them to have better night vision since they can distinguish shades of grey far better than humans.

So what exactly does your dog see? Fewer colors, a lower height level, a wider perspective, better night vision, and has a built-in cleaning system that allows them to see in dusty environments. But they learn about their environment primarily with smell and sound, so the next time you wonder why your dog didn’t see something, it’s likely because seeing it wasn’t a priority for them.