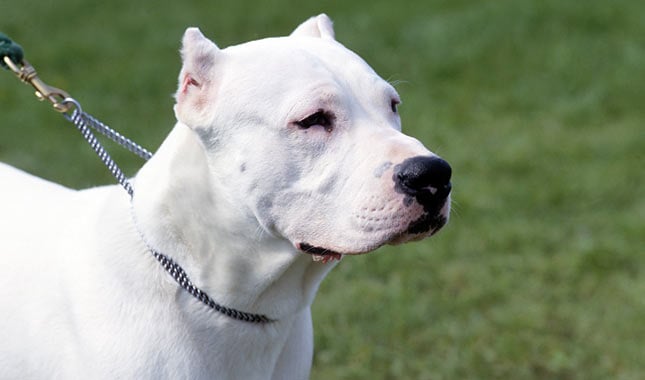 The Dogo Argentino is also known as the Argentinean Mastiff. When people hear the word Mastiff, they think of the Bull Mastiff and they expect the dog to be extremely tall. This is not the case with the Dogo Argentino. While he is a large dog, he does not grow as large as the Bull Mastiff. If you are considering adopting this amazing breed, there are a few things that you should know.

This dog is very strong. He has a powerful head and a powerful neck. He can grow between 24 and 27 inches tall and he can weigh between 80 and 100 pounds. He has almond-shaped eyes that either dark brown or hazel and they are deeply set and wide apart. He is a very adorable dog.

His Ears Are Often Cropped

The Dogo Argentino has flat, broad ears that are rounded at the tip. Many owners choose to have their dog’s ears cropped when they are still young. This makes the ears stand up straight with a triangle shape. Some owners do this because they think that it makes the dog look more fierce.

His Coat Depends on the Climate

The thickness of this dog’s coat depends on the climate. If he lives in a warm climate, his fur will be very thin. In some cases, it will be so thin that the dog’s skin is visible. If he lives in a colder climate, his fur will grow in thicker. In some cases, he will even develop an undercoat. Most of these dogs are white and some will have a black patch on either eye, which makes him even more adorable.

He is a Product of Creative Breeding

This breed was created by two brothers from Argentina named Agustin Martinez and Antonio Martinez. They wanted to breed a dog who could help them in the Argentinean countryside when they hunted for big game. They used the Bull Mastiff, the Pointer, the Great Pyrenees, and the Cordoba to create the breed.

He is a Very Purposeful Dog

Antonio Martinez died while on a hunt and Agustin continued breeding the dog. Since he was an ambassador to Canada, he was able to take the breed to Canada and then all over the world. While this dog was initially bred as a hunting dog, he proved to be capable of much more. The breed has worked with the military, the police, a tracker, and a guide for the blind. He has also been used in search and rescue missions.

He is a Great Protector and He Loves Kids

Not only are these dogs considered to be friendly and cheerful, they are also very loyal and protective. This is especially true if there are children in the house. This dog understands that children are small and that they need to be protected and he has no problem taking on the job.

He Needs To Be Socialized Early

This breed isn’t a fan of strangers. Some even become suspicious of new people. If you want your dog to be good with new people, you need to start introducing him to new people when he is still young. If he starts getting used to meeting new people at an early age, he will be much better when you have company

He Needs Lots Of Exercise

Since he is a big dog, the Dogo Argentino needs lots of exercise. He needs more than just some time in the backyard on a run. He needs to be walked and even jogged to get the exercise that he needs. If he doesn’t get enough, he can become bored which will lead to destructive behavior.

Deafness is a Problem For This Breed

As far as health problems go, the most common one in this breed is deafness. Some of these dogs lose their hearing as they age, however, according to the Dogo Argentino Club of America, about 10 percent of these puppies are born deaf.

He Has a Relatively Long Life Expectancy

Most people know that the larger the dog, the shorter the life expectancy. This is a large dog, therefore, it is surprising that he can live to be between 10 to 12 years. This is longer than most dogs his size.

The Dogo Argentino is a great family dog and a great work dog. He is loving, powerful, and loyal. Overall, he would make an excellent pet.