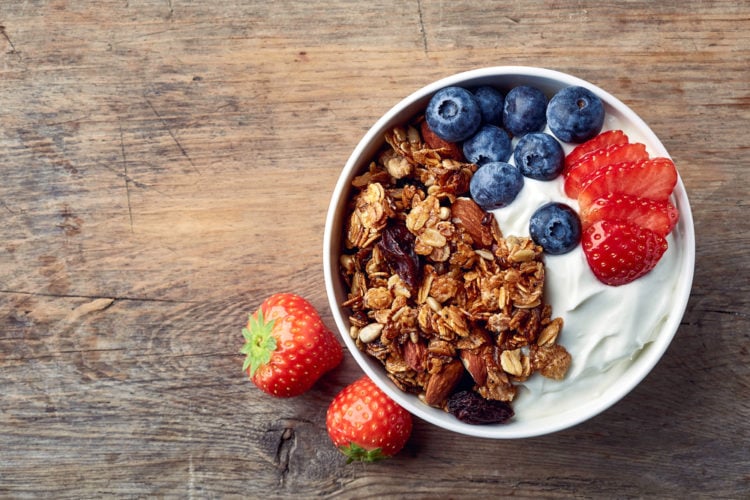 Yogurt is a kind of fermented milk. The production process starts with the milk being heated for the purpose of denaturing the milk proteins. Then, the milk is cooled so that it won’t kill the bacterial cultures that are mixed in. After which, the mix is kept warm for a few hours. Generally speaking, when people think of yogurt, they think of yogurt made using cow’s milk. However, it is very much possible to make other kinds of yogurt using other kinds of milk. Chances are good that people can guess that people have been consuming yogurt for a very long time. However, it is interesting to note that it seems to have been introduced to the United States in the early 20th century. Like a lot of foods, it didn’t become popular with the general U.S. population until it had undergone a fair amount of adjustment. For example, yogurt was sweetened because plain yogurt was too sour. Similarly, the creation of fruit-bottom yogurt was another solution for the same issue. Thanks to that, yogurt is now a very popular food in the United States. As such, dog owners might be wondering whether their dogs can eat yogurt as well.

The answer is a bit complicated. Dogs can eat yogurt in the sense that it shouldn’t kill them. However, there are a lot of dogs that can’t digest lactose very well as adults, meaning that high-lactose foods can give them gas, diarrhea, and vomiting. By default, most mammals lose the ability to digest lactose once they have been weaned, which is a non-issue for them because most mammals won’t be either drinking milk or eating milk-based products afterward anyway. In fact, this is true for humans as well. For proof, look no further than the fact that just 35 percent of the human population can digest lactose as adults with no issues whatsoever. It isn’t clear how this happened, but milk is pretty nutritious stuff, so it seems reasonable to speculate that the ability to digest lactose as adults was pretty beneficial in pre-modern times when food security was nowhere near as high as what people would have liked. In any case, there are some dogs that can digest lactose as adults. Interested individuals shouldn’t count on it though.

Check With Your Veterinarian

A dog owner should always check with their veterinarian whenever they think about feeding their dog something new. There are some foods such as yogurt that are fine for some dogs but not for others. Similarly, there are some dogs that don’t react well to foods that are fine for most dogs for one reason or another. Their veterinarian should be familiar with their dog’s medical condition as well as other relevant information, which should enable them to provide the best advice on whether their dog can eat something or not.

Unsurprisingly, people should feed their dog yogurt in moderation. As mentioned earlier, a lot of dogs don’t react well to lactose, meaning that feeding them a lot of yogurt is a good way to inflict gastrointestinal issues on them. Instead, it is better for people to test their dog’s reaction. For that matter, it is possible for yogurt to cause other issues in dogs for other reasons, so it is a good idea to take precautions against those as well. To name an example, yogurt contains a lot of fat. In the short run, this can make for an upset stomach; in the long run, this can make for obesity, pancreatitis, and other serious medical problems.

Dog owners should choose unsweetened yogurt for their dogs. Eating large amounts of sugar is bad for our canine companions. It causes them to become overweight, thus increasing the risks for a wide range of medical problems in much the same way that it affects humans. Furthermore, dogs aren’t very good at digesting sugars, so eating too much can result in gastrointestinal issues as well. As for artificial sweeteners, well, what is safe for humans isn’t necessarily safe for dogs. Dog owners should stay away from anything containing xylitol because that is just straight-up poisonous for their dogs.

Go For Yogurt With Lots of Live Cultures

On a similar note, dog owners should consider choosing yogurt that contains a lot of live cultures. Said products should have less lactose in them, which in turn, should make them more digestible by dogs. If dog owners are concerned about their dog not being able to digest lactose very well but want to feed their dog yogurt anyway, this is something that they should look into for the purpose of reducing the chances of gastrointestinal issues.

It might be best to avoid feeding fruit yogurt to dogs. They can eat some fruits without issue. Unfortunately, they can be poisoned when they eat others. To name an example, grapes are bad for every single kind of dog out there. Furthermore, there are a couple of other issues to keep in mind as well. One, even if a dog can eat a particular kind of fruit, it can be bad for them to eat too much of that fruit. Two, it is common for fruit yogurts to contain other additions, so interested individuals will need to scrutinize their list of ingredients to see whether they are safe or not.

Summed up, dogs might be able to eat yogurt, which contains certain nutrients that can be beneficial for them. The issue is that yogurt also contains ingredients that can cause an upset stomach or worse, so dog owners need to be very careful when feeding yogurt to their dogs. In fact, yogurt should never be treated as anything more than an occasional treat for dogs. If dog owners aren’t sure about anything when it comes to feeding their dogs yogurt, they should get in touch with their veterinarians sooner rather than later.