Recently, California saw its most vicious wildfire ever in the history of the state with the Mendocino Complex Fire. This was a terrible, tragic fire that was born out of two separate fires which eventually merged together, burning down homes, businesses and most tragically, claiming lives. Both civilians and First Responders were killed as a direct result of this fire but as is usually the case, there was something good that came out of it. You might even say it was something beautiful.

One night while helping to battle the blaze, firefighter Patrick Cullen noticed something standing off in the distance. Since it was dark, he really couldn’t tell what it was, especially with the bright flames contrasting off of the night sky. As a matter of fact, all he could really see was two glowing eyes, and they were looking right at him. For a moment, he thought that he just might be staring down a potentially dangerous creature like a mountain lion. He wasn’t exactly sure what he should do next, but as it turned out, he didn’t have to worry about it. The next thing he knew, a German Shepherd came walking out of the smoke right towards him. Those were the eyes that he had seen glowing in the distance. As the dog got closer, those very eyes seemed to be looking at him and asking for help. 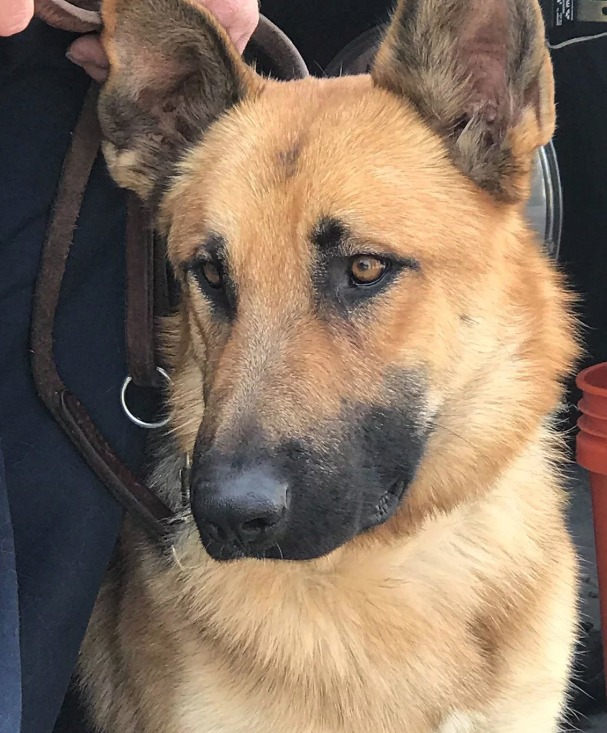 Realizing that the dog was probably terrified and not knowing who he belonged to, Cullen checked him for potential injuries and gave him some water. Other than being extremely dehydrated and underweight, the dog seemed to be healthy. He made a place for the dog to sleep next to the fire truck and went back to his duty of fighting the fire. The next day, when his shift was finished, he took the dog to the local animal shelter and dropped him off. He was thinking that someone would surely come forward to claim such a beautiful animal. In his mind, he assumed that the dog had gotten scared because of the fire and has somehow become separated from his owners. He was convinced that someone would be looking for him. Nevertheless, he thought about that beautiful dog night and day.

After a few days had passed, he finally decided to call the animal shelter and see if anyone had come forward about the German Shepherd. To his dismay, no one had even so much as called and inquired about him. Right then and there, he made up his mind that he was going to adopt the dog himself. He went to the animal shelter, followed up with the adoption process, and brought the dog home with a brand new name- Mendo. He decided that it would only be appropriate the name the German Shepherd for the very fire that he walked right out of. Since the Mendocino fire has a rather long name, he decided to shorten it to Mendo. However, the dog’s name serves as a reminder that even in the worst possible tragedy, there is always hope for something better around the corner.

Today, this dog is extremely happy and healthy and firefighter Cullen is happy to have him as part of his family. He said that when he went to adopt the dog, the German Shepherd was so happy to see him that he ran around him in complete circles, twisting and turning the entire time. It was as if the two were meant to be together from the very beginning. The site was so touching that it warmed the hearts of the shelter workers. They even commented that the dog acted like Cullen had been his owner all along. Obviously, these two needed each other and on one of the toughest nights of one of the worst disasters in California history, they found each other.

Fortunately, Mendo doesn’t seem to have any issues related to his trek through the fire. By all accounts, he’s a happy dog that greets everyone and wants to be friends with everybody he sees. Cullen says that he’s easily one of the friendliest dogs that he’s ever known and that he’s always eager to please. Once again, this just goes to prove that good things do come out of tragedies. You just have to know what you’re looking at.