The Greater Swiss Mountain Dog is called the Grosser Schweizer Sennenhund. Interested individuals should have no problems figuring out what the first two words mean. However, the Sennerhund refers to people called either Senn or Senner, meaning herders who made a living in the Swiss Alps.

3. More than One Potential Origin

4. Bred to Be Big and Strong

It is believed that the Greater Swiss Mountain Dog was bred to be both big and strong because the people living in the Swiss Alps needed a multi-purpose breed that could provide a wide range of uses to farmers. One excellent example is how the breed saw extensive use as a draft dog, so much so that it was sometimes called the Poor Man’s Horse in recognition of this particular role.

In the late 19th century, the Greater Swiss Mountain Dog came very close to extinction. This wasn’t because of some kind of disaster. Instead, it is believed that the breed was replaced in its roles by either machines or other breeds. 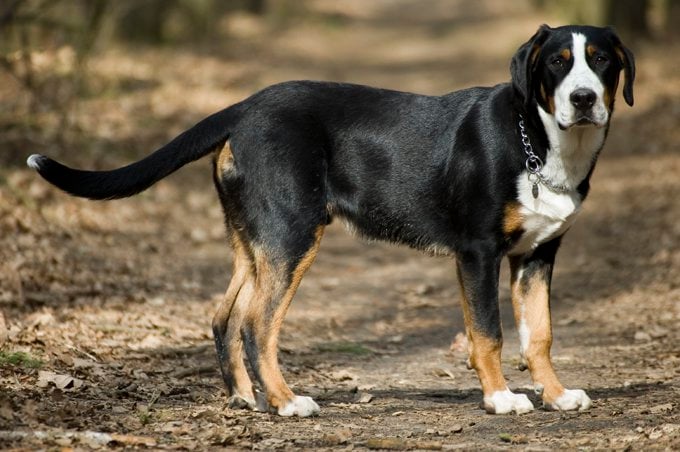 Fortunately, a man named Franz Schertenlieb showed a pair of dogs to a professor named Albert Heim in 1908, who recognized them as a pair of the big Swiss mountain dogs who were dying out at the time in spite of the fact that their predecessors had once been spread throughout much of Europe. Heim was the man who encouraged breeders to take an interest in them, which in turn, led to the establishment of what has become known as the Greater Swiss Mountain Dog.

The personality of the Greater Swiss Mountain Dog reads like a list of positive characteristics. For example, it tends to be bold but nonetheless eager to please. Furthermore, it is gentle and intelligent, which combine particularly well with its friendly nature. On top of this, the Greater Swiss Mountain Dog is even capable of getting along with other household animals.

Generally speaking, Greater Swiss Mountain Dogs make for good watchdogs. In part, this is because they are very alert animals, meaning that they excel at monitoring their surroundings for signs of potential problems. However, it helps that while they are protective of their charges, they aren’t excessively so, meaning that they won’t go after strangers that aren’t a threat.

9. Needs a Fair Amount of Room

With that said, Greater Swiss Mountain Dogs have a problem in that they need a fair amount of room to thrive. Simply put, this is because they are bigger dogs who need a lot of exercise, meaning that they don’t do so well when they are cooped up in small spaces.

10. Has Been Known to Exhibit Rage Syndrome

Like other breeds, the Greater Swiss Mountain Dogs exhibits some medical problems more than others. One example can be seen in how some members of the breed have been observed with what is called rage syndrome, which is very odd in that the dog shows sudden signs of aggression but will revert to their normal behavior without seeming to remember what has happened. Unfortunately, there doesn’t seem to be a simple cure because it is genetic in nature.