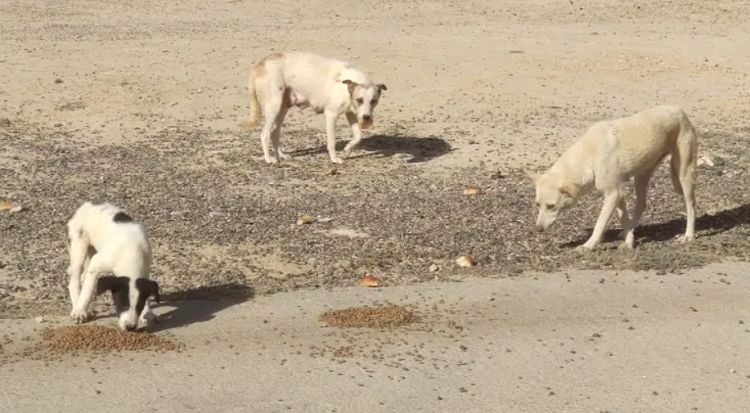 There are hundreds of dogs living in a landfill in the Israeli town of Arad. Unsurprisingly, said animals suffer from a wide range of problems that include but are not limited to a lack of food, a lack of healthcare, and violent competition over limited resources. The issue received widespread attention in recent times because of a video showing local volunteers providing the dogs with dry food. However, that is not a real solution in the long run. Instead, the SPCA has recommended a plan with multiple components that include sterilizing the dogs, vaccinating the dogs, taking in the puppies that possess adoption potential, and educating the local communities about the relevant issues.

Why Is This Concerning?

For starters, abandonment has a very negative effect on abandoned dogs. We can’t be sure that dogs feel the same emotions that we do, but we have plenty of stories that suggest that dogs can feel a sense of sadness upon being separated from their humans. If dogs are indeed capable of feeling the same emotions that we do, it seems reasonable to say that they are likely to suffer more than humans because they don’t have a rational understanding of what has happened as well as why it happened. In any case, while the emotional toll tends to be bad, the physical toll tends to be even worse.

Simply put, dogs aren’t very good at finding food unless they have learned the relevant skills for finding food. Generally speaking, pet dogs don’t have those skills because they tend to get their food from their dog owners, meaning that they tend to be wholly unprepared for basic survival in the environments where they have been abandoned. As a result, even if abandoned dogs manage to find enough food to keep themselves alive, they have very high chances of suffering from malnutrition as well as the other health issues that come from not getting enough food. Something that is particularly true because abandoned dogs are often abandoned in overcrowded or otherwise inhospitable environments.

Of course, abandoned dogs are exposed to a wide range of other potential threats as well. For example, they are much likelier to come into contact with pests and pathogens, which will have lasting effects on their health. Likewise, they may or may not be very good at navigating street traffic, meaning that a single moment of carelessness can see them hit by a car. On top of that, abandoned dogs are going to be facing serious competition from other abandoned dogs, which is the kind of scenario that can very easily lead to canine-on-canine violence. Such encounters can result in serious injuries. Something that can impair as well as worsen with frightening speed.

Meanwhile, abandoned dogs can have a very negative effect on humans as well. For starters, the act of abandonment inflicts emotional wounds on both the dog and the dog owner, which will be on top of whatever issues caused the abandonment in the first place. However, there are even more effects on local communities. One, abandoned dogs can be a serious nuisance because of their howling as well as the smell of the urine that they use to mark their territories. Two, while abandoned dogs aren’t as bad as abandoned cats, they are nonetheless capable of multiplying their number with considerable speed when they are left unchecked. Three, people have a very understandable desire to help out abandoned dogs, but there is a huge problem in that most animal welfare organizations tend to have very limited resources. As a result, it doesn’t take a lot of abandoned dogs before animal welfare organizations start running into the limits of their finances, which can have negative effects for their other responsibilities if they pull funding from them. Four, most abandoned dogs aren’t aggressive towards humans. If anything, they tend to be skittish towards humans. However, it is possible for abandoned dogs to become sick enough, hungry enough, or scared enough to pose a threat to either humans or human interests, which is another potential concern when there are enough of them in the area.

What Can People Do About This Kind of Thing?

The solution for a large number of abandoned dogs in an area isn’t particularly mysterious. After all, there are a lot of places that either have an abandoned dog problem or have had an abandoned dog problem, meaning that there is a fair amount of expertise and experience that have been built up over time. As mentioned earlier, such solutions tend to involve sterilization to prevent abandoned dogs from adding to their number, the provision of food as well as healthcare to alleviate their suffering, the rescue of suitable puppies so that they can have a better future than living in an inhospitable environment, and education for dog owners as well as potential dog owners to make them aware of the issues that can contribute to the abandonment of dogs. Unfortunately, just because a solution is known, it doesn’t make implementing a solution easy. None of these things can be done without money, manpower, and other resources, which animal welfare organizations are almost always short on. Ultimately, it is a matter of numbers in the sense that there are more animals that need to be cared for than there are resources with which to provide the necessary food, healthcare, and other forms of care.

On a more personal level, interested individuals have various options by which they can help. For instance, they can donate their time as well as their money to animal welfare organizations, thus enabling those to do more than otherwise. Besides that, interested individuals might also want to look into recommendations when interacting with abandoned dogs so long as they remember to prioritize their own safety above other considerations. If they can master interacting with abandoned dogs in a safe manner, that should open up further possibilities for how they can help said animals.