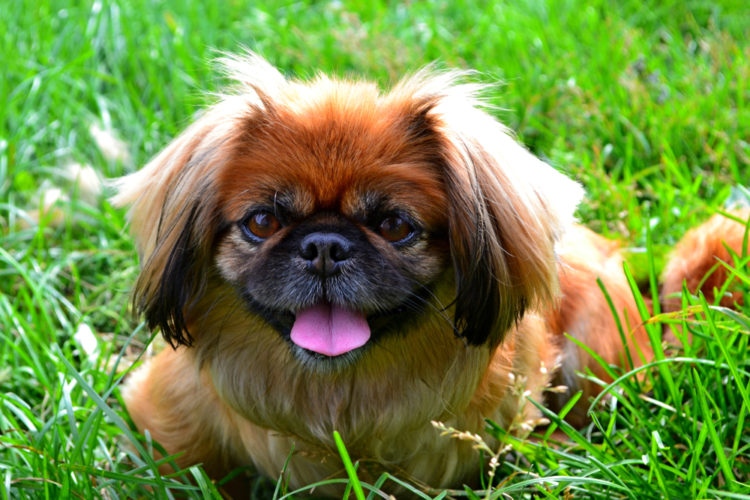 The Pekingese is one of the better-known toy dogs that can be found out there. Not every toy dog was meant to be a companion animal. However, the Pekingese was definitely meant to be a companion animal. As the story goes, these dogs were much favored by Chinese nobles. However, the first five Pekingeses that made their way to the west did so when British and French soldiers stole them from an aunt of the Chinese emperor while they were burning down the Old Summer Palace at the end of the Second Opium War. Two of the dogs went to the Duchess of Wellington; two of the dogs went to a duke and another duchess; and the last dog went to Queen Victoria. Later, more Pekingeses went to the west under less appalling circumstances. For example, a number are known to have been presented to high-profile Americans as gifts. Similarly, the first Irishman to own Pekingeses was a Dr. Frederick Samuel Heuston, who had set up smallpox vaccination clinics in China. Eventually, there were enough of these dogs in the west to form viable populations. The popularity of the Pekingese has waxed and waned over time. Even so, there can be no doubt about their status as one of the more recognizable dog breeds out there. Of course, Pekingese have both upsides and downsides. However, it isn’t hard to see why they would be popular for some would-be dog owners out there. For starters, they are loyal and affectionate towards their family members, though they are much more standoffish towards strangers. As a result, Pekingeses have seen use as watchdogs. Besides this, they are also intelligent but independent, which can make it challenging to train them but can also make them a bit better-suited for being on their own than other dog breeds that were bred to be companion animals. Combined, these characteristics can make the Pekingese an excellent match for a lot of people out there.

What Can You Expect to Pay for a Pekingese Dog?

Interested individuals have a number of options for getting a Pekingese. As always, each option has both upsides and downsides, meaning that there isn’t one that is best for everyone out there. Instead, interested individuals are going to need to choose between these options based on the considerations that matter the most to them.

First, there is the option of looking for someone who is either giving away a Pekingese or effectively giving away a Pekingese. This kind of thing can happen because people sometimes wind up with a dog or more than one dog that they can’t take care of. Sometimes, this is because something has changed about their circumstances, which has impacted their ability to take care of a companion animal. Other times, this is because their pet has had an unexpected pregnancy, meaning that they have to find homes for the puppies because they lack the resources needed to care for every single one of these animals. There are a couple of major issues that interested individuals should keep in mind about this particular option. One, it isn’t exactly the most reliable option to say the least. Pekingeses aren’t particularly uncommon dogs. Even so, the chances of there being one available when interested individuals go looking aren’t that great. Instead, it is the kind of opportunity that interested individuals keep a watchful eye out for more than anything else. Two, there can be a higher chance of the dog having some kind of issue depending on exactly what is going on. To return to the example of someone whose dog has just had puppies, there is a higher chance of the puppies having some kind of issue compared to the puppies from a reputable dog breeder. After all, an unexpected pregnancy means that the dog owner presumably didn’t have much control over which dog sired the puppies. On top of that, if they are either giving away or effectively giving away the puppies, they presumably aren’t spending a great deal of money on the puppies’ training and healthcare.

Second, there is the option of either adopting or rescuing a Pekingese, which has some serious upsides to it. To name an example, it is possible for the cost to go as high as the low hundreds of dollars. Even so, that can be much cheaper than buying a Pekingese from a reputable dog breeder, particularly since chances are good that the cost will cover some of the dog’s healthcare needs. Since interested individuals are going to need to pay for those healthcare needs anyways, there is no real difference between them paying those costs earlier and paying those costs later. Besides this, people might also be moved by the fact that either adopting or rescuing a dog is just a good thing to do. Simply put, the animals that have been sent to animal shelters and animal rescues need assistance. It is no exaggeration to say that people are saving lives when they choose to either adopt or rescue a dog, seeing as how the resources that are no longer being used on that dog can be used to help out other animals. Something that is quite important because there are a lot more animals that need assistance than animal shelters and animal rescues can care for. In any case, this option has its downsides as well. Availability is something that interested individuals can expect to come up once more. To mitigate this, they might want to look into resources that specifically exist for the purpose of connecting people who want a Pekingese with Pekingeses that need a new home, which can cover a much wider area than just their immediate surroundings. Similarly, while some dogs wind up in animal shelters and animal rescues even though they are 100 percent problem-free, those dogs tend to have a much easier time finding a new home. Thanks to that, interested individuals might have to settle for a Pekingese that has either a health issue or a behavioral issue of some kind. Fortunately, going to an animal shelter or an animal rescue means that said issue will presumably be manageable because said organizations have no real reason to lie about such things. Still, that can mean additional complications that people will have to prepare for.

Third, there is the option of buying a Pekingese from a dog breeder. This is one of the dog breeds that can see enormous variation in their price, which goes from $800 to $3,500 in most cases. However, there is a source that claims an average price of about $1,000 to $1,500. Please note that it is possible to find offers that are either much lower-priced or much higher-priced than these, though interested individuals should be careful when looking into either lot. In any case, it is important to note that a dog breeder’s price always reflects a dog breeder’s costs. They are businesses, meaning that they can’t keep themselves running in the long run unless they are selling their puppies at a profit. As such, interested individuals should be very careful about buying a Pekingese at a suspiciously low price because that suggests that the dog breeder isn’t exactly putting a lot of resources into their puppies. Something that can increase the puppies’ chances of developing either health issues or behavioral issues or both. This is particularly true for dog breeds such as the Pekingese, which already have enough problems without dealing with the consequences of problematic dog breeding practices. For example, these dogs have a shortened face, meaning that they are already likelier to experience breathing problems than most dogs. Similarly, these dogs have protruding eyes, thus making them that much likelier to either develop eye problems or sustain eye injuries. Speaking bluntly, Pekingeses don’t need additional risk factors in these regards. For that matter, Pekingese owners don’t need those things either, seeing as how those things can cause huge upswings in costs. Of course, just because a Pekingese is expensive, that doesn’t guarantee that it is receiving the proper care and attention. Interested individuals should always look into a dog owner’s operations to make sure that they are doing a good job. Extending a measure of trust to businesses is fine. However, it is important to always verify their claims when those claims can affect something important such as, say, what people can expect from their dog of choice.

What Are Some of the Factors that Can Influence the Price of a Pekingese Dog?

There are numerous factors that can influence a Pekingese’s price. Due to this, interested individuals might be able to get a better deal by being more specific about what kind of Pekingese they look for. To name an example, most people want puppies rather than older dogs. Thanks to this, puppies are the most expensive before becoming more and more affordable as they get older and older. As such, this can be a very easy to reduce costs. Similarly, not every Pekingese will be capable of living up to the standards that have been set by the American Kennel Club and similar organizations. If people don’t mind a dog that is somewhat off-standard, they can check to see if that will provide them with a less expensive puppy. Of course, this doesn’t mean going for dogs that are off-standard in a way that affects their wellbeing in a negative manner. For instance, Pekingeses are supposed to have a smooth, dignified sort of gait without any bouncing, prancing, or any other kind of jarring movement. It wouldn’t make sense for people to go for a dog that is off-standard in this regard because they have leg issues that increase their chances of developing a mobility problem in the future. Instead, look for things such as a more common and less in-demand coat color, which might lower the puppy’s price without reducing the puppy’s chances of being a happy, healthy dog in the times to come. Having said this, it should come as no surprise to learn that there are factors that can cause a Pekingese’s price to soar as well. In particular, being born of prestigious parents can apparently make one of these dogs cost as much as $5,000, which says a lot about the demand for them.

What Other Costs of Owning a Pekingese Dog Do You Need to Consider?

The price of a Pekingese is just the first thing that interested individuals will need to consider. They are living beings, meaning that they are going to incur more costs over time in the same way that humans do. Generally speaking, the first year will be the most expensive because of the items that have to be purchased but won’t need to be repeated in subsequent periods. However, a Pekingese’s healthcare costs can soar if it develops some kind of serious medical problem, meaning that this isn’t guaranteed to be the case.