Teething is an important issue for every puppy owner or owner-to-be because this is a time that can be difficult for both the dog and the owner. I once had a 5 month old puppy who chewed through the wires of my $80 headphones in record time. So the teething behavior can be destructive. Most of the facts on this list will apply to all dogs owners, but there are a few that are limited to people who have taken a puppy into their home who is less than 2 weeks old. In my view, it is better to know than not to know.

Like a human baby’s teeth, they will also fall out and be replaced with a different set of permanent teeth. This first set is preparing the puppy’s gums and jaws to accept the future set.

2. Your puppy will not have any teething issues for the first two weeks after birth

This is because your puppy will not be growing any teeth as they begin nursing from their mother. The first two weeks are critical for the development of the puppy, so nature has designed it so the mother will have an easy two weeks after birth.

3. The second and fourth weeks after birth are when the first teeth start showing up

If you have had children, you know how difficult the process is when they are teething. Puppies go through a similar stage that is painful for them. This is when the chew toy is an essential part of puppy raising and teething adjustment. To alleviate their pain, puppies will want to chew – on something. Chew toys are far less expensive than headphones.

You might consider this the peak teething time because the puppy’s gums and jaws are forming to accept the next of teeth. Get ready because you have about 5 more months to go before the teething stage is over.

This is when you will begin to find their baby teeth on the floor. You may not find all 28 teeth because sometimes they will swallow them. 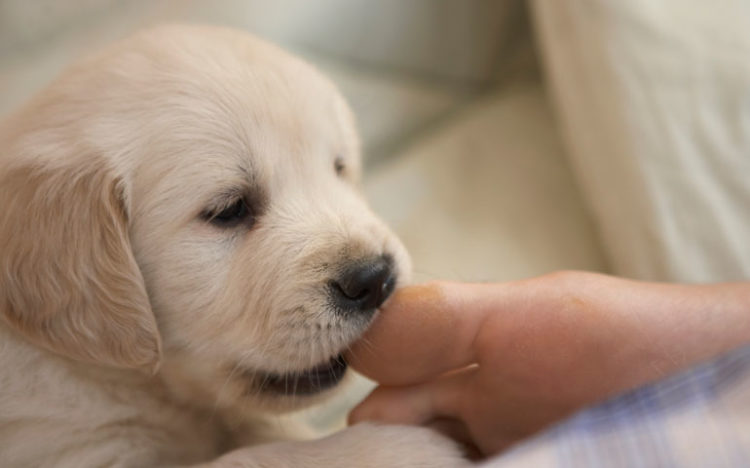 6. A chew toy or some other soft chewy is essential for the puppy’s comfort

Chewing on things helps ease the aches and pains that go along with the teething process. Watching your puppy go through this stage will tell you a lot about how they adjust to pain. Unlike human babies, they tolerate it well.

7. The weeks between 12 and 16 can be used for another purpose

Unless a dog is comfortable with you putting your finger in their mouth, brushing their teeth down the line may be a bit of a wrestling match. This is the time you can carefully put your finger inside the puppy’s mouth and get them used to the idea of you putting something in there. But don’t underestimate the sharpness of those tiny teeth.

8. The end of the teething period should be around 6 months old

After 6 months you should expect that all of their baby teeth will be gone, and you can relax a bit. Keep those chew toys since they can be used for other purposes later. But if there are still baby teeth the have not fallen out (you should check) then a trip to the vet is in order.

9. Teething is a transition stage

10. Puppy play and teething are connected

Every puppy must learn how hard is too hard when biting during play. They often bite their owners or their family members when teething as an act of playfulness, not aggression. As an owner you need to be aware of this and learn to properly handle each situation as different than another.

These facts should arm you with enough information to get you through the difficult and sometimes challenging teething time every puppy must endure. Whether you get a Saint Bernard puppy or a Chihuahua, the problem will be the same. Usually the biggest problem is that owners, especially first time owners, don’t understand the teething process. The puppy will do what puppies do naturally, so your main part is to watch their behavior and throw them a chew bone when needed. Everything else will take care of itself.