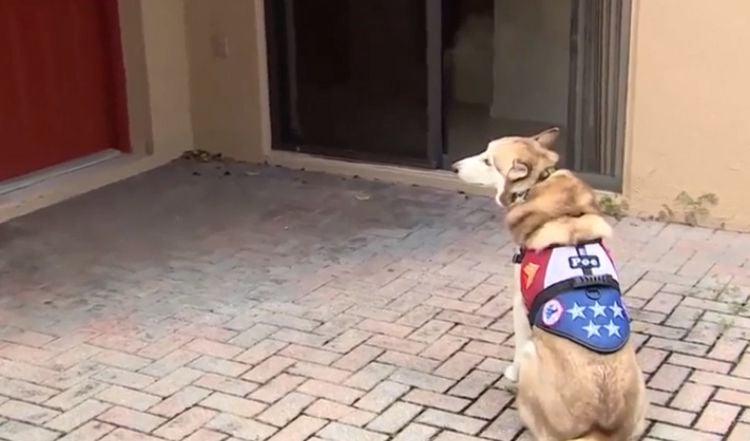 A controversy is brewing up around Boca Raton area, where a resident, George Little, is required to either muzzle his dog or move out. George, a veteran who served for over 12 years, risks losing his lease if he fails to muzzle the dog. He claims the dog is a well-trained service dog that helps him when need be. That is, keeping it in a muzzle will limit its functionality. He goes ahead to state that service dogs are not pets, but medical equipment.

Background of the story

After staying in a place for over five years, it is quite absurd when suddenly the rules become tighter up to the point of forfeiting a lease. Well, the rules had been in place for a long time. They are on the tenancy agreement signed by George when assuming the lease. It’s only that when Mr. Little was joining the apartment, he had an agreement with an office staff who exempted his dog from the rule given it’s a service dog. With the woman not working with the housing association anymore, and not having any written official agreement, the veteran has limited options. The housing association requires that every pet above 25lb must be muzzled.

After staying in the Banyan Lakes for around five years, Mr. Little does not consider the possibility of moving places. He claims the area is nearer to his work and friends. As mentioned earlier, at this point, Mr. Little has minimal options. He either put his dog on a muzzle or forfeit his lease. While this might sound harsh, it is all in a bid to ensure safety to others. He signed the tenant agreement of the property and must be willing to abide by those rules.

While five years is such a long time to stay in a place then lose it all due to changes in regulations, at times, it is the only choice. Dealing with special occasions can also be a little tricky. In this case, the dog owner is a veteran while the dog is a well-trained service dog. This makes it hard to decide whether to provide exemptions or follow the laid down estate rules. Here are some of the essential points to note from this case:

While service dogs are trained to behave in a certain way and comes with high emotional intelligence, they are not fully human safe. According to ADA National Network, a business premise or any other property can refuse entry to a service dog that behaves in unacceptable ways or is disruptive. Some of the inappropriate behavior by the service dogs include; jumping on people, uncontrolled barking, and disturbances. In a residential area, the service dog can also be a health and safety hazard to the other occupants.

ADA also states that the owners are responsible for full-time care of the dogs. The owner should keep the dog under leash or tether at all times. They can also opt for other control mechanisms like voice control. The premise managers, on the other hand, are allowed to determine the size and type of animals they allow access. Not every dog can become a service dog. It requires intense training and guidance to do specific tasks. In George Little’s case, he has to abide by the owner’s responsibility and lease agreement, he must be responsible for Poe and put in him on a muzzle. This is the only way to ensure both the dog and the occupant’s safety.

The role of the Housing Association in Pet Control

Housing Association plays a significant role in ensuring the safety and well being of all tenants in a property. A report by the Royal Society of Arts (RSA) states that the housing association has a role in supporting the vulnerable in their settlements. By enforcing the rule that requires every animal over 25lb to be muzzled is protecting the people who the dog can harm. From how George describes the place as being good and that its where he is most comfortable, it means the housing association is delivering on its mandate. It is only right that they follow the tenant agreement when dealing with George’s case. Exempting him based on being a veteran might likely form the precedence of special treatment. It mostly ends up with nobody following the rules hence harm to all the occupants.

Finding an amicable solution to George’s can be quite hectic. While the housing association is right to call for George to follow the tenant agreement provisions, you also have to give it to him. There are no reports of his dog being a nuisance or threat to the other tenants throughout his time of stay. In the end, though, the laid down rules must prevail. It’s either George muzzles his dog or opts for the harder option of looking for a new neighborhood that allows service dogs to roam freely.