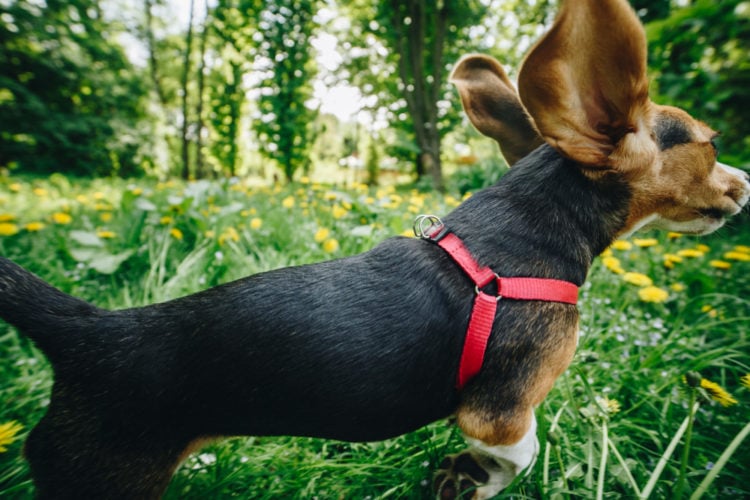 The convenient thing about purebred dogs is that they have been bred for a consistent set of characteristics for generation after generation. It is possible to create the same kind of predictability in designer dogs. However, the interest in them hasn’t existed long enough for that to have happened throughout. As such, interested individuals should expect a fair amount of variation among Bagle Hounds.

2. Can Claim Both British and French Ancestors

Bagle Hounds can claim both British and French ancestors. This is because Beagles came into existence in Britain while Basset Hounds came into existence in France. Perhaps unsurprisingly, the two regions had a lot of contact with one another in pre-modern times, seeing as how southern England is separated from northern France by the English Channel. However, there were political reasons for this contact as well. For example, Duke William of Normandy became King William of England via the Norman Conquest of Anglo-Saxon England. Similarly, King Edward III of England claimed the French throne because none of his French uncles were able to sire a son, with the result that it passed to a separate branch of the Capetian dynasty.

3. Bagle Used to Be a Generic Term

Once upon a time, beagle was a generic term for smaller hounds. As such, interested individuals shouldn’t mistake the modern Beagle for its pre-modern counterparts. For instance, there were once Glove Beagles and Pocket Beagles, which were named thus because one was capable of fitting on a glove while the other was capable of fitting in a pocket. The existence of these dogs is well-attested. Unfortunately, some of the sources used these names in an interchangeable manner, meaning that it isn’t clear whether they were separate breeds or separate names for the same breed.

4. Beagles Used to Be Used for Beagling

Beagles are scenthounds. As a result, it should come as no surprise to learn that they were used for hunting. To be exact, Beagles were used for beagling, which means the hunting of hares and rabbits but not of foxes. Traditionally speaking, this was meant for two groups of people, with one being fox hunters who had retired for whatever reason and the other being those learning how to handle hounds before moving on to fox hunting.

5. Bagles Have Been Used as Watch Dogs But Not as Guard Dogs

A good watch dog isn’t necessarily a good guard dog. That can sound strange, but the fact of the matter is that the two roles call for different capabilities. For instance, consider Beagles, which have seen use as watch dogs but not as guard dogs. The first is explained by the fact that they are prone to either barking or howling when they encounter something unfamiliar, while the second is explained by the fact that they can be won over with relative ease even by strangers. It is very much possible for Bagle Hounds to inherit these characteristics, which is something that interested individuals should keep in mind.

Speaking of which, Bagle Hounds can also inherit the Beagles’ susceptibility to separation anxiety. Essentially, they were meant to be pack animals. Thanks to this, when Beagles are left on their own, they are more prone to exhibiting distress as well as other behavioral problems than a lot of other problems. Something that can result in excessive vocalization, destructive chewing, and other serious complications. Unfortunately, Basset Hounds are also pack animals, thus making this even more of a potential concern.

7. Basset Hounds Can Trace Their Roots to Sparta

Supposedly, Basset Hounds can trace their roots to Laconian Hounds, which came from a region that tends to be best-known because of the presence of Sparta. Some people might find it strange to hear about the Spartans owning hounds. However, they were a leisure class, meaning that they engaged in the same leisure activities as their counterparts throughout the ancient Greek world. If anything, the Spartans had more time to engage in these things because they were forbidden by law to take up a craft or a trade.

9. The Short Legs of Basset Hounds Can Cause Complications

It is possible for the short legs of Basset Hounds to cause complications. To name an example, they tend to be poor swimmers, both because of their short legs and because of their heavy weight. As a result, interested individuals need to closely supervise Basset Hounds that have entered the water to ensure their safety. Bagle Hounds may or may not inherit these characteristics. However, if they have, interested individuals should make sure to show them the same kind of care.

10. Not Too Demanding When It Comes to Energy

Designer dogs are popular because they can inherit desirable characteristics from both sides of their heritage. To name an example, Bagles Hound often strike a fine balance between the excesses of Beagles and Basset Hounds. The first tends to be energetic, while the second tends to be lazy. Bagle Hounds can lean towards either extreme, but a lot of them wind up being relatively average when it comes to their energy levels, thus making them better-suited for a wider range of interested individuals. Still, regular exercise is important for keeping these dogs both happy and healthy.