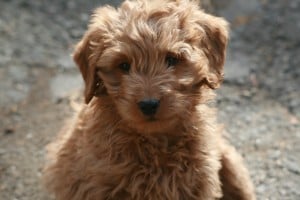 A fairly new designer hybrid dog breed, the Mini Goldendoodle is a cute dog. A cross between a Golden Retriever and a Toy or Miniature Poodle, this dog is one that makes a very intelligent and very loving family pet. The biggest cautionary tale associated with the Mini Goldendoodle is the fact that many breeders are not completely ethical when it comes to their breeding practices. Rather than breeding total miniature poodles with total Gold Retrievers, they will use a multi-generation cross, resulting in Mini Goldendoodles that are not 50% of each breed.

When breeding this particular hybrid, breed standard requires that the mother is a female Golden Retriever and the father is the smaller poodle – or else breeders are required to use a form of artificial insemination. It’s considered the safest way to breed since there is never any guarantee that the puppies from any given litter will be small like the toy or miniature poodle used in breeding. Imagine a toy poodle attempting to give birth to puppies that are more like your standard Golden Retriever and you can see why this is a terrible idea.

As with any breed, those who are interested in a particular dog to potentially call their own want to know what to expect with the Mini Goldendoodle as they bring it home and as the dog grows up. Unfortunately, it is nearly impossible to predict the behavioral patterns and personality traits of hybrid designers at this point in time. The Mini Goldendoodle is such a new breed that there is no breed standard as far as personality and temperament are concerned.

To garner the best idea of what you can expect out of this breed, potential Mini Goldendoodle owners are encouraged to become familiar with the personalities and temperaments of both the mini/toy poodle and the Golden Retriever. The Mini Goldendoodle could take after either one, more of one than the other or a great mixture of both as far as personality and temperament is concerned.

Fortunately, the Mini Goldendoodle comes from a good heritage. Both the parent breeds are considered highly intelligent dogs, good with kids and very great family pets. They are both playful and fun, they love to exercise and frolick, and both are easily trained. The Mini Goldendoodle will likely take on the personality traits of both its parents, making it a very protective, loyal and sweet dog to raise. Some poodles are a little hesitant around kids they are not sure of, but raising a dog with kids is a great way to ensure this is not a problem.

There is no way to predict how large or small the Mini Goldendoodle could grow. It could become more like the Golden Retriever or more like the toy poodle, though it does seem that many of this breed end up somewhere in the middle. While it will not be a large dog, it will also not be a very small dog. What I will have, though, is a great hypoallergenic coat that does not shed. This is what people who already have Mini Goldendoodles love most about the breed.

Many take on the look of the Golden Retriever with a shaggy coat that has just a little bit of a relaxed concept of the poodle curl, but they do not shed. As far as exercise is concerned, the Mini Goldendoodle is an active and playful dog. It will adapt just fine to a smaller home or apartment, but it needs daily exercise that includes playtime and something to stimulate the dog because it is such an intelligent breed. A long daily walk is also recommended.

This is a great dog to have if you have a big back yard and plenty of space in which the Mini Goldendoodle can run around and play. A great dog for families, this is one that will welcome new babies with ease, play well with the big kids, and keep an eye on the kids for you to ensure that they are always out of harm’s way. This breed is great for families, and it is part of the main reason that people love the Mini Goldendoodle so much. The fact that it is a mix between two of the most adorable dogs alive does not hurt.

The Mini Goldendoodle is like any dog; it could become sick or suffer from any disease at any time. However, the breed itself is a fairly healthy one. The small size poodle health concerns are eliminated through this breeding process because the puppies that result from the breeding process are not as small as the parent poodle. There are some genetics that play a role in health issues surrounding the Mini Goldendoodle, but nothing that cannot be handled easily by reading the parent paperwork and checking veterinary records before bringing home a Mini Goldendoodle to call your own.

As far as breed history is concerned, there is not much to say with the Mini Goldendoodle. It’s a dog that is fairly new and very popular across the world, growing in popularity on a regular basis. This breed was bred when breeders discovered a need to create a Golden Retriever that has a smaller look and a hypoallergenic coat. They’ve since worked tirelessly to create the perfect breed by perfecting their breeding practices. These are not dogs designed to do a specific task so much as they are bred to be cute, playful and desirable to families looking for a great dog to raise with their children.