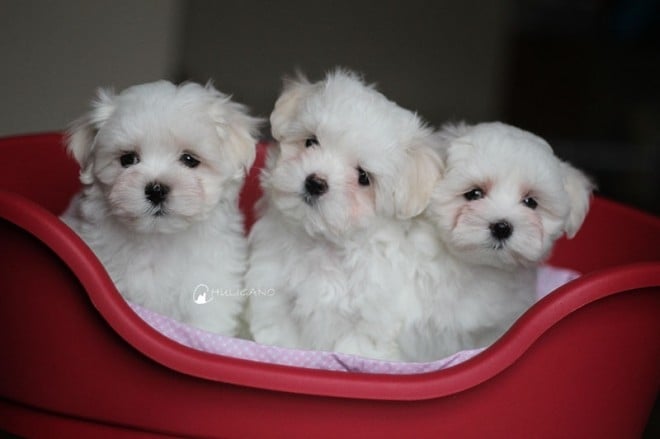 The Teacup Maltese is one of the brightest and most cheerful breed of dogs. The term is used to refer to the miniature breed of Maltese species. It is a curious, quick moving dog that does not require much outdoor exercise. The main quandary is that the Teacup Maltese comes out as an underdog when compared to larger dogs, which is why it is always advisable to keep it fenced or leashed for his own protection. What’s more, you should check to ensure the fence does not have any gaps that the dog might wriggle through.

Although some samples are confident and outgoing, most are usually quiet and peaceful. In any case, it all comes down to training and socialization. If you spoil or indulge him excessively, chances are he will end up insecure, over-dependent, or yappy and obnoxious. Fortunately, Maltese are very responsive to respect training, and tend to thrive in agility and competitive obedience. However, a doggy door leading to a small potty yard outside or an indoor litter box may be needed, since the dog can be especially hard to housebreak.

The history of the Maltese dog can be traced back to at least 2 millennia. In fact, the dog was documented by writers, poets, and artists during the early influential cultures of Egypt, Rome, and Greece, with notable mentions from Aristotle himself. They were highly valued by the ancient Egyptians, who represented the dogs on memorable artifacts, while the Greeks set up tombs for their Maltese. The dog was also riddled with myths and misconceptions, as people believed that the Maltese possessed the ability to cure people of diseases. This led to one of its moniker “The Comforter”.

Interestingly, the exact origin of this small dog is uncertain. The most popular theory is that the breed was developed from the Spaniel-type or Spitz dogs in the Isle of Malta (Mediterranean Sea). Other tales suggest that he originated from Italy, while still others claim that he was developed in Asia, from where he played a role in developing several other small Asian dogs. Regardless of his origin, the Maltese didn’t have a hard time finding his way in people’s hearts. The French aristocrats in the 15 century, for instance, were particularly fond of the breed. The dog soon found itself in the British Isles during Henry VIII’s reign, and had become an adored pet for royal and noble ladies by the end of the sixteenth century. A few noteworthy enthusiasts included Queen Victoria, Mary Queen of Scots, and Queen Elizabeth I. These small dogs were even included in portraits of beautiful women by famous painters like Sir Joshua Reynolds and Goya. Sadly, the breed was almost destroyed in an attempt to reduce the dog to the size of a squirrel between the seventeenth and eighteenth centuries.

To save the dog, breeders had to mix East Asian miniature dogs with miniature spaniels and poodles, leading to a variety of new Maltese species. Most people believe that the modern Maltese are directly related to the Havanese, Bolognese, and Bichon Frise breeds. Majority of Maltese today can be traced back to the English breeders of the 1800s. During the 1870s, they could be seen in Westminster Kennel Club shows and, by the 1950s, most of the breed had been registered with the AKC (American Kennel Club). Since then, the Maltese have grown to become extremely popular at dog shows, winning the Toy Group and “Best in Show” competition on a frequent basis.

The male species of a regular Maltese is normally 8-10 inches tall at the shoulders, while their female counterparts are usually 8-9 inches tall. A regular, fully grown Teacup Maltese weighs between 2 and 4 pounds. It is important to note that teacup Maltese is significantly smaller than the regular Maltese when growing up. In fact, they are so small that a puppy can literally fit into a teacup, hence the name.

The compact size of a Teacup Maltese has its own consequences. These cute little dogs are significantly more susceptible to health issues than a regular Maltese. Common conditions include heart problems, fragile bones, seizures, dental problems, and low blood sugar, among others. Not all Maltese will acquire any or all of these conditions, but it pays to be aware of them when considering the breed. When going for a puppy, look for a reputable breeder with health clearances for both of the puppy’s parents. These include the OFA (Orthopedic Foundation for Animals) for hip dysplasia, von Willebrand’s disease, hypothyroidism, and elbow dysplasia; Auburn University health clearance for thrombopathia; as well as the CERF (Canine Eye Registry Foundation) clearance for normal eyes.

As a Teacup Maltese ages, his body slows down gradually, compromising the bone structure, sensory processing, and internal organs. While a regular Maltese can live for up to 10-12 years, a teacup Maltese can be limited to probably just 5 years. Here are some of the natural changes that may affect the dog’s lifespan:

How To Improve Your Teacup Maltese Life Expectancy

Fortunately, there are a few things you can do to extend the lifespan of your Teacup Maltese. These include:

To help your Teacup Maltese reach his/her expected lifespan, incorporating daily exercise with healthy meals can go a long way. Exercise is useful for the entire body, especially the muscles, heart, and lungs, and often helps create a much more behaved dog.

Inhaling second hand smoke can increase your dog’s risk for lung cancer and heart issues. If there are any smokers in your home, encourage them to limit their smoking to outdoor areas.

The stress of modern lifestyle can make it hard to adhere to regular veterinarian visits. In fact, most owners usually just forget about the checkups after they are done with the puppy shots. Routine checkups are important not only for maintaining good health, but for recognizing conditions and disorders in their early stages to increase the chances for successful recovery.