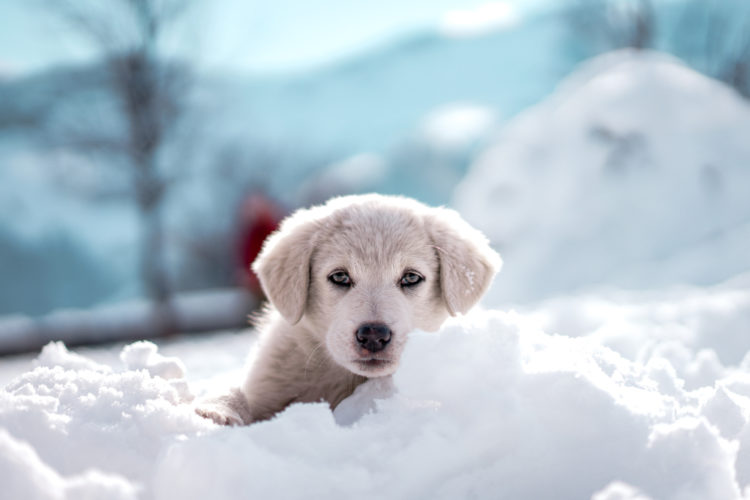 It is normal for people to wear more clothing when temperatures are low. As a result, dog owners might be curious if their dogs need winter coats. If so, they should know that there isn’t a universal answer because different dogs can have very different bodies. Some dogs can fare quite well under winter conditions. In contrast, others cannot say the same. Generally speaking, there are some bigger dog breeds such as Siberian Huskies that don’t need winter coats because they have dense, thick fur that protects them from the cold. This makes sense because these dog breeds were meant to operate out in the cold for long periods of time. Unfortunately, there is a wide range of other dog breeds that should have a winter coat for a wide range of reasons. For example, smaller dog breeds need winter coats because they tend to lose their body heat at a faster rate than their bigger counterparts. Similarly, shorter-haired dog breeds need winter coats because they have less fur with which to protect themselves, which is true whether because they were born that way or because their grooming has left them that way. Dog breeds that stand lower to the ground need winter coats as well. In this case, this is because their bellies brush against ice and snow more often, which has a very detrimental effect on their ability to stay warm. Besides these, dog owners should consider giving older dogs a winter coat as well because it is very common for older dogs to become worse at personal temperature regulation. Moreover, they can develop medical conditions such as arthritis that make it more important for them to stay warm. As for what dog owners should expect of winter coats meant for their dogs, there are a number of criteria to keep in mind. One, the winter coat should be long enough to cover the dog from the base of the neck to the tail. Two, the winter coat shouldn’t be long enough to hinder the dog if the dog needs to either defecate or urinate. Three, the winter coat should fit well without hindering the dog’s movements in any way. These conditions should leave plenty of good options for dog owners, meaning that they should have no problem finding something that is well-suited for their dogs.

How Can You Tell If Your Dog Is Suffering From the Cold?

Having said that, it is a good idea for interested individuals to keep a watchful eye on their dogs while outdoors for signs of hypothermia. As mentioned earlier, these guidelines are just guidelines, meaning that they may or may not be applicable to specific animals. Under those circumstances, it is better to be safe rather than be sorry by putting too much faith in such assumptions. Thermometers make it very easy to tell whether a dog is suffering from hypothermia or not. The normal range of body temperatures for our canine companions is 101 to 102.5° in Fahrenheit, which translates to 38.3 to 39.2° in Celsius. It is interesting to note that this is quite a bit higher than the normal range of body temperatures for us, which is 97.6 to 99.6° in Fahrenheit or 36.4 to 37.6° in Celsius. As such, if a dog has a lower body temperature than what it should while it is outdoors during winter conditions, it seems safe to say that it is suffering from hypothermia.

Unfortunately, thermometers aren’t necessarily very convenient. Due to this, dog owners will need to keep a watchful eye out for the signs of hypothermia in their dogs. Chances are good that the first sign will be excessive shivering, which can be accompanied by the dog curling up for the purpose of staying as warm as possible. Later, other symptoms can show up including but not limited to lethargy, paleness, dilated pupils, faster heart rate followed by slower heart rate, and faster breathing followed by slower, shallower breathing. Eventually, the dog can lose consciousness as well. On top of these, dog owners might notice signs of frostbite, particularly on the ears, the paws, and the tail. Discoloration is a common sign. Similarly, it is common for frostbitten parts of the body to seem cold and brittle while causing pain to the dog when touched. In fact, frostbite often causes blisters, ulcers, and swelling in the affected areas. In extreme cases, it can even cause the affected areas to look black because they are either dead or dying. As for what dog owners should do if their dogs are showing signs of hypothermia, that depends on the seriousness of the case. Anything past the point of 98° in Fahrenheit or 36.7° in Celsius means that the hypothermia is serious enough that they should be bringing their dogs to either a veterinarian or some other source of emergency assistance as soon as possible. Otherwise, their dogs might experience catastrophic consequences. Before that point, there are some things that dog owners can do to warm up their dogs. One example would be warming up some blankets using either a dryer or a radiator before wrapping the dog in them. Another example would be putting a hot water bottle against the dog’s stomach, though make sure to warp that hot water bottle in a towel to prevent the dog from getting burned by it. Besides these, giving warm liquids to the dog can be a good idea as well provided that the dog is conscious enough to drink. In any case, even if a dog’s hypothermia is mild enough for it to be handled by the dog owner, it should be brought to the veterinarian for a check-up at a later point anyways. This is necessary for determining whether the dog has experienced any long-term damage to its body. Something that is extremely important because dog owners don’t want to be caught off guard by the consequences of such things.

How Else Can You Protect Your Dog During the Winter?

Of course, winter coats are just one of the ways that dog owners can use to reduce the chances of their dogs getting hypothermia. There are a lot of other methods that can be used to keep a dog warm during the winter, which should be put to use by interested individuals. Some of these methods are redundant. However, most can provide some measure of usefulness, meaning that dog owners should be using many of them rather than just the one. This is particularly true because a lot of these methods are very easy to use. For starters, the easiest way to prevent dogs from getting hypothermia is to limit their exposure to the cold. Something that can mean a wide range of things. For example, one option would be staying indoors rather than heading outside. Similarly, another option would be heading out for shorter periods of time but making up for it by heading out more frequently. Of course, the worse the weather, the more that dog owners should keep their dogs indoors for the purpose of limiting their exposure to the cold.

Moving on, dog owners should make sure that their dogs stay as dry as possible while they are out and about. This is because they lose body heat much faster if a part of their body is wet for some reason, thus increasing the chances of them getting frostbite. As such, if dog owners give their dogs a bath, they need to make sure that their dogs are completely dry before they head out. Moreover, dog owners should try to prevent their dogs from coming into contact with too much snow, which can cause their dogs to become wet by melting. Besides this, dog owners might also want to check up on the place where their dogs are sleeping. Perhaps unsurprisingly, extra bedding can do a great deal to help dogs stay warm. However, it is interesting to note that it can also be a good idea to keep dogs away from drafty parts of the home because that will expose them to cold weather even though they are indoors. For that matter, dogs should also be kept off of the ground because being in contact with the same can make it much easier for them to lose their body heat. Naturally, adding sources of heat can be just as useful as removing sources of heat loss. Something like a heating pad beneath the dog can do a great deal to help them stay warm.

What Are Some Dog Breeds that Do Well and Don’t Do Well During the Winter?

Naturally, dog breeds that were meant to operate in cold temperatures tend to do better in cold temperatures. Siberian Huskies are an excellent example because their ancestors were meant to pull sleds under arctic conditions. However, it is interesting to note that a wide range of circumpolar peoples kept a wide range of circumpolar dog breeds, which also tend to do well in winter. After all, if dogs such as Samoyeds and Alaskan Malamutes couldn’t survive those situations, they wouldn’t still be around in the present time. Something that is particularly true because they wouldn’t have been able to do the important work that was entrusted to them before the advent of motorized vehicles. Having said this, it is important to note that other peoples also created other dog breeds that are adapted for the cold for one reason or another. To name an example, Bernese Mountain Dogs do well in the cold because they started out as working dogs in the Swiss Alps. Similarly, Newfoundlands started out as working dogs in a place that can get quite cold, with the result that they have adapted accordingly.

There are plenty of other dog breeds that don’t fare so well in the cold for one or more of the reasons that were mentioned earlier. For instance, Chihuahuas are very small dogs that originated from the Mexican state of the same name. As such, they fare very poorly in the cold, meaning that their exposure to the same should be avoided as much as possible. Meanwhile, Whippets are quite a bit bigger. However, they have a number of issues that make them not so good at dealing with winter. One, their fur is short, meaning that it provides relatively little protection. Two, they are very much on the leaner side of things, meaning that the cold will go right to their core rather than be blocked by their body fat. Indeed, Greyhounds are also bad at enduring the cold for much the same reason as Whippets. Moving on, Dachshunds don’t do so well in the cold either. Their coat isn’t long enough to provide them with much protection. Moreover, they stand very low to the ground, with the result that their bellies will come into contact with a lot of snow. This is much the same reason that Corgis are also poorly adapted for winter. Summed up, there are dog breeds that are better-suited for the cold as well as dog breeds that are worse-suited for the cold. Due to this, if people know that they will be bringing their dogs out into the cold on a regular basis, they might want to get a member of a dog breed that is adapted for such conditions. That should make it much easier for them to keep their dogs warm, though even then, they will still need to take the proper precautions.