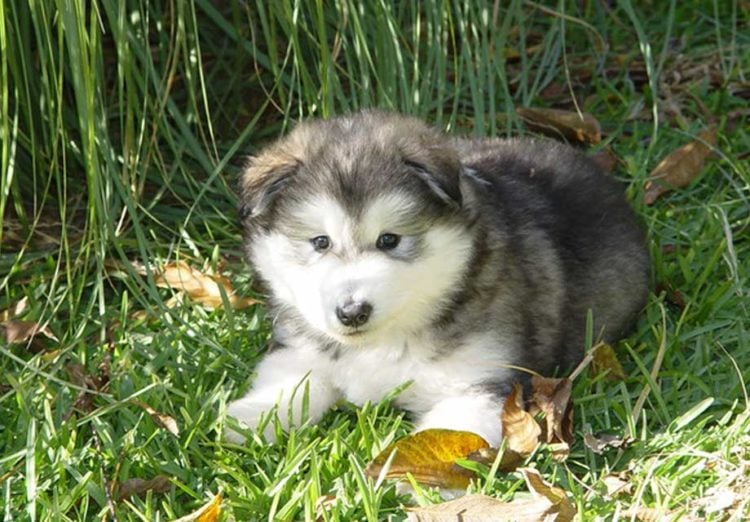 Alaskan Malamutes are arguably one of the beautiful breeds of dogs. They were originally bred to be freight haulers due to their incredible strength and endurance, and later they were used as sled dogs, which is what they are most commonly thought of. Today, they are still used for these jobs in areas where harsh weather conditions make transportation difficult and limited.

Adding to that, they are also used for recreational and competitive sledding, or mushing, as it is also known. They’re beautiful, loyal and intelligent dogs. They are also loving and affectionate, which makes them great household pets. Alaskan Malamutes are some of the most adorable puppies with their striking colors and features. Their energetic, quirky little personalities have been caught on video and you can see some of the cutest Alaskan Malamute puppy videos of 2017, right here.

5. Conversation with an Alaskan Malamute puppy

This little guy has a lot to say and he is telling his owner all about it. He dances and slips and slides all over the floor as he’s talking to his owner and you see his little ears flop about as he moves around. His expressions are adorable because he seems so sincere with what he’s trying to say. Puppy conversations are so cute and you can’t help but wonder what it is they are really trying to say. Whatever it is he’s saying, it’s apparently a very happy conversation because he couldn’t seem to be having more fun.

4. Gaggle of Alaskan Malamute puppies that are too cute for words

How can you not fall in love with every single one of these Alaskan Malamute puppies? They are so curious and just happy to be alive. From tugging on their blanket, to playfully nipping at each other’s butts, these guys are just big balls of fur, waddling around investigating their environment and learning how to play with toys, and each other. One of the cutest moments is watching one of the puppies interact with his owner and get and give puppy kisses, which makes you want to grab one and give them puppy kisses too. There’s nothing better than to watch a bunch of puppies, especially this beautiful breed, learning what life is and seeing what they are going to learn next.

Watch this little guy show off his tricks that he’s already learned. For being so young, he’s already gotten a good grasp of what obedience means. While it’s hard not to just admire his beautiful coat, adorable fuzzy ears and kissable black nose, what is really the most impressive, is the fact that he already knows how to sit, lie down, shake, and turn around. He’s obviously still trying to learn to perfect his tricks, but watching this gorgeous Malamute perform what he already knows in this video is simply just too cute, and it’s one you’ll want to replay a few times.

Have you ever seen a puppy of any breed, argue with a soda bottle? I hadn’t until now, but it’s worthy of making the cutest Alaskan Malamute puppy videos for sure. Whatever it is he’s telling this Coke bottle, sounds like he means business. I would guess that he doesn’t know what that is, and he doesn’t want it in his room or his space. Occasionally he gets close enough to lock his mouth around the neck of the bottle and his owner has to periodically release some off the fizz, just so it won’t explode. Listen to his high-pitched bark and squeals as he has his little puppy encounter with this Coke bottle that he’s meeting for the first time.

Ever see a puppy get singing lessons? Well, Alaskan Malamutes are one breed that love to vocalize everything. They howl, they sing, they bark, anything that can get them heard. But these puppies aren’t born knowing how to howl and sing; they have to learn. In this video, this little Alaskan Malamute puppy is getting his singing lessons and it is so cute, you’ll want to want it over again. Watch the two together, singing and howling at the top of your lungs. This video will make smile and make you laugh, and may even make you want to get an Alaskan Malamute for yourself.