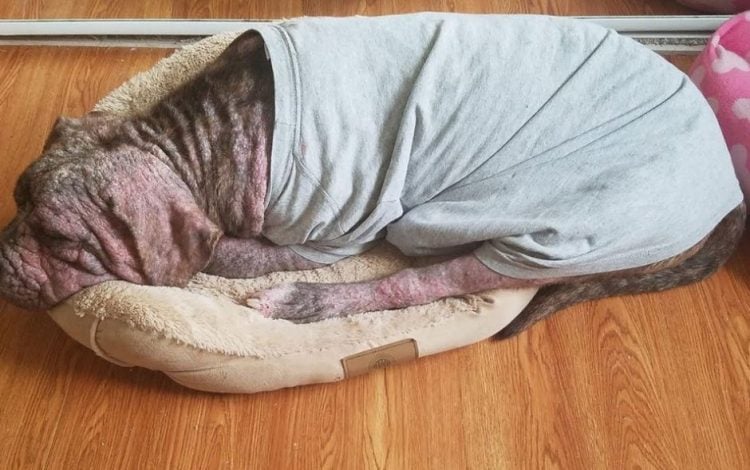 It’s a sad fact that some dogs require a great deal more care and considerable financial support than others because they have some serious health issues. And, Bubba is one of them. He’s a nine-month-old puppy who suffers from a skin disorder called demodectic mange. It causes the poor little guy’s skin to be seriously irritated, making it impossible for him to grow any fur. It also makes his skin painfully itchy as well.

Now, Bubba once had a home to live in, however, his human family was forced to surrender him to the SPCA in Sacramento. They simply didn’t have the financial resources to care for him and pay his sky-high medical bills anymore.

So, after a quick stop at the animal shelter, Bubba went to a nice foster home. It was a grand welcome to his new home when everybody was out front waiting to say hello to the sad new pup who would now be happier in his foster home. First of all, there was his human foster mom, another dog, and even the cat showed up in spite of the fact that she generally never shows up for that kind of thing. She’s an orange kitty named Mandy and she decided to make an exception for Bubba. Maybe it was because of his condition or maybe she was just curious. But either way, she was there waiting to greet this new addition to their household.

And, as a special thanks to Mandy, Bubba promptly stole her bed. You see, Bubba loves cat beds. He really doesn’t fit very well in the cat bed but he doesn’t care. He just snuggles in, half of him hanging over the sides, and he’s just as happy as a clam.

Bubba settled in quickly to his new foster home and learned at breakneck speed how to wear his new t-shirts and play with his new toys. He learned even faster how to wait as patiently as he possibly could in the doorway to the kitchen when Mom was fixing his food.

Aside from bed-stealing, Bubba’s foster Mom says that he has perfect manners. As far as his skin is concerned, it will be cleared up but it will take some time, maybe even several months, since he not only has the mange to contend with plus a secondary skin infection as well. It’ll take awhile, however, once it clears up, he can be adopted. The people at the shelter said that, in spite of his painful condition, he always remained sweet and good and just slept a lot at the shelter. And, now in his foster home, he does a lot of that, too. 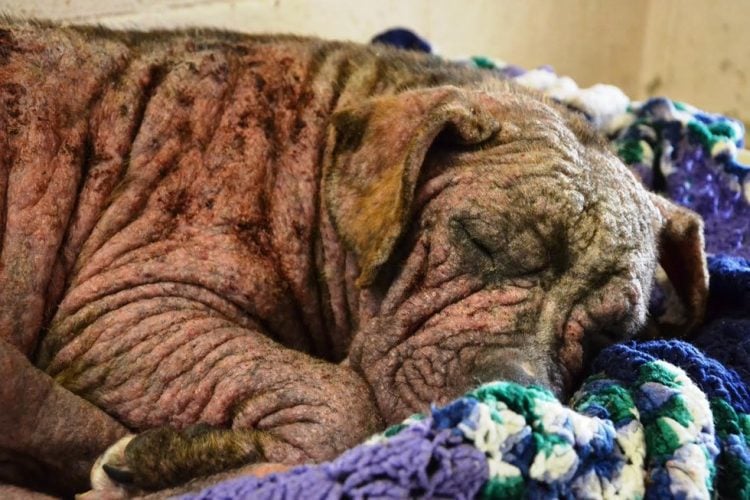 So, as sweet and lovable as Bubba is, he shouldn’t have any trouble finding an adoptive family to love him just like the dog, Mandy and, his foster Mom do. We just hope that they have a cat bed, too! And, we would just like to say “kudos” to the SPCA and to wonderful foster families like the one that took Bubba in.