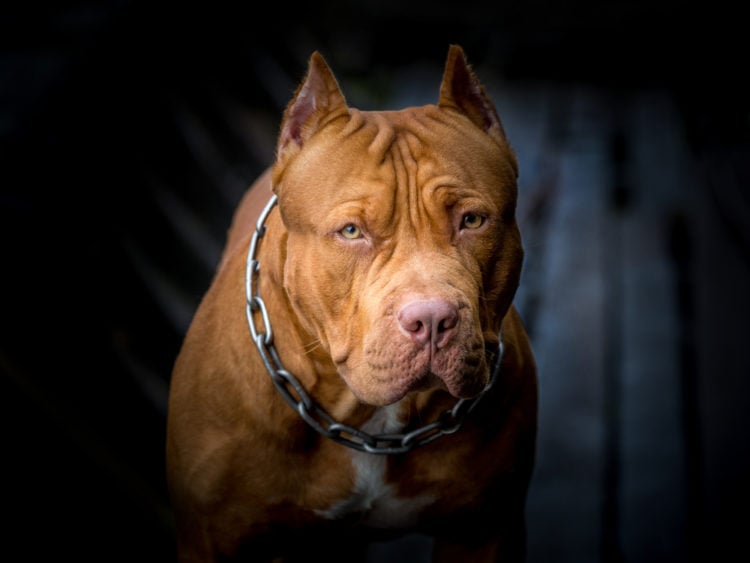 There are times when it is absolutely shocking how cruel some people can really be. Fortunately, those moments are often precipitated by another person showing the world the better side of humanity, often in an effort to offset the actions that touched off an entire event to begin with. Such is the case with Killer, a male pit bull mix who was so cruelly abandoned and left behind to drown by his owner. Fortunately, that didn’t happen and it’s all thanks to the efforts of individuals who were passing by and just happened to see the dog. They called the State Police and the dog was fortunate enough to escape such a horrible fate.

The Massachusetts State Police get all kinds of calls. There really is no such thing as a normal day. For one State Trooper, a recent day involved patrolling in and around Short Beach, a rather secluded area along the Massachusetts coastline. On this particular day, several calls came in about a dog that had been abandoned and appeared to be tied to something with a heavy chain. Obviously, the State Trooper was dispatched to the area and sure enough, there was a male pit bull mix that had been tied to a piece of rebar sticking out of the sand with a heavy chain around his neck. Just to make sure that he didn’t manage to escape, a massive rock had been placed on top of part of that chain, effectively pinning him down and ensuring that he could scarcely move at all. This is cruel enough in and of itself. The dog was abandoned and chained in such a way that he couldn’t even move, offering him virtually no means of escape. However, the story gets worse. He was deliberately tied in an area that would be completely submerged under water once the high tide came in. That’s right, a person deliberately tied him to this area, knowing full well that water would eventually flood the area and the dog would drown. It’s one of the cruelest things that a person could do to another living creature. Fortunately, the fact that people saw the dog and called it in stopped this from happening.

After the dog was rescued, a comprehensive investigation began to find the suspect. It only took a few days for police to put a case together and bring in a 27 year old male, Elias Pacheco- Osario, for questioning. Almost as soon as he was brought in, he confessed to the crime. He said that he simply couldn’t keep the dog, so he decided to tie him up and let him drown. It’s obviously one of the most cold and callous things that any person could do to another living being, something he showed absolutely no remorse for whatsoever. He was charged with animal cruelty and then posted just over $300 in bail. He’s currently free and awaiting trial. That begs the question, which is worse? The fact that such a terrible crime happened in the first place or the fact that someone can do something so cold and calculating and basically get away with a slap on the wrist? Furthermore, one has to wonder. If a person is willing to do this to a dog or any other animal, would they hesitate to act in a similar way toward another human being? People that can do something like this, especially something as cruel as allowing a creature to drown, don’t seem to have a conscience. That fact alone is absolutely terrifying. Clearly, there are plenty of other options that were available to him. He could have simply taken the dog to a no-kill facility and surrendered it if he didn’t want to keep it any longer. Choosing to purposefully kill an animal in one of the most cruel methods possible is a disturbing idea, to say the least. He wound up, at least for the time being, being a free man while paying about the same as a person would pay for a traffic ticket. It remains to be seen if anything will change once he actually goes to court.

Killer Gets A Second Chance

What finally became of Killer, the dog who was the subject of this particular rescue? At the moment, he is at Ocean View Kennels. The staff there are taking care of him and ensuring that he is in otherwise good health after he was rescued. So far, he’s even had his picture taken with the State Trooper who was responsible for his rescue. The staff at Ocean View Kennels hope to eventually adopt him out to a good home. However, they are also quick to point out that they’re not going to rush into things, especially after the dog went through such a harrowing ordeal. They want to be absolutely certain that he has had time to recover, both physically and mentally. Furthermore, they want to be able to rest easy in the knowledge that the home he eventually goes to is indeed a good home where he has an opportunity to be happy while simultaneously being kept safe. The last thing anyone wants is a repeat of this type of situation or anything that is even remotely similar to it. For now, he seems to be enjoying his time at the facility and he’s generating a great deal of interest on social media after his story ended up going public. No one really knows why Killer’s previous owner felt like he couldn’t keep him. After confessing to the crime, he decided to stop talking, refusing to tell anyone if there was an initial problem with the dog’s behavior or if he simply didn’t want the animal anymore. That said, the individuals who have come in contact with Killer so far seem to think that he is a friendly, happy dog who deserves a second chance. Hopefully, he will eventually get that chance with a family that truly loves him the way that every living creature deserves to be loved.