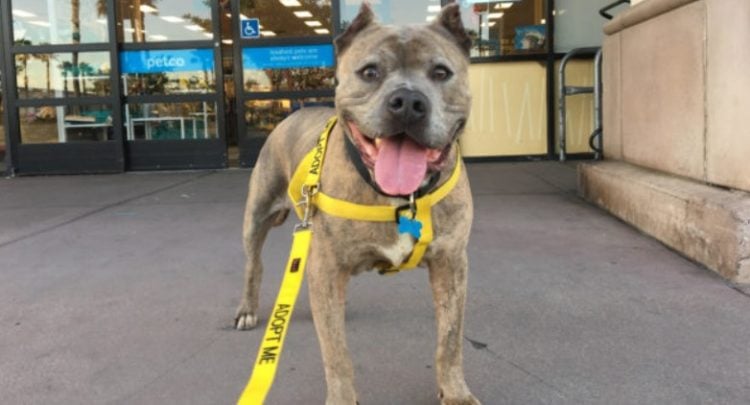 Although the staff and volunteers at rescue shelters work really hard to make sure all the animals in their care feel loved and comfortable, living in a shelter doesn’t even come close to living in a real home with a loving family. That is why the staff work so hard to help every dog find a home as an extended period in a shelter is an unpleasant experience for a dog. Sadly, there are some dogs that stay in shelters for longer than was hoped. For example, Mugzy had lived at the Ventura County Animal Services for longer than any other dog at the shelter. As he had spent 500 days straight at the shelter, Mugzy was chosen to take part in a special program that showed how a simple act of kindness towards a dog can change its life forever.

A study sponsored by Maddie’s Fund involved foster carers taking dogs living in shelters out for the day. One of the foster carers participating in this study was Kelly Duer, and she would take out a dog for the day so that they could have a break away from the shelter. She would even take the dogs to a nice hotel for the night. One day in the summer of 2017, Duer chose Mugzy as the dog that she would take out that day. She felt that he was one of the most deserving dogs as he had been in the shelter for so long, and she knew that life had not been easy for him.

Mugzy was an adorable dog, but he also had some issues; his ears were crudely cropped so he looked a little odd, and he suffered from Vestibular disease, which means that he had some mobility issues. Despite his problems, he was a very affectionate dog that loved attention from humans, such as having his belly rubbed and tickled. Duer took Mugzy out for the day and he had a fantastic time. He particularly enjoyed going for a walk and going to the pet shop. At the end of the day, he got to relax in the hotel where he sprawled on a sofa in the hotel room. He also enjoyed having the chance to meet new people, which led to him getting a lot of attention. Eventually, Duer returned Mugzy to the shelter so that she could give another dog the chance to have a day out.

Throughout their day together, Duer took lots of photographs of Mugzy’s experience. She later posted the pictures on IMGUR, where they attracted a lot of attention. The photographs were even noticed by I Heart Dogs, who asked if they could share the photographs on their website. The story they ran delighted their readers, and it was shared more than 1,000 times on Facebook. Mugzy’s story had really touched people’s hearts. One person who saw the post was Orinda Beiers from the Hearthfire Animal Rescue Team (HART) in West Richland, Washington.

Orinda instantly fell in love with the old Pit Bull and arranged for HART to collect him. The team headed to Southern California to pick him up and take him back to Washington. As he had already been waiting for a home for almost two years, they decided that he should become one of their Final Refuge dogs and never spend another night in a shelter. Instead, he was moved straight into a foster home, and his foster mom decided she would like to keep the dog permanently. Finally, Mugzy had found his forever home and was living in a comfortable environment with lots of love. He also received all the medical care he needed courtesy of HART.

By this time, Mugzy had established quite a following on Facebook, and his fans wanted updates on how he was getting along. His foster mom began posting updates on social media to keep people informed of his progress. Kelly Duer, the woman who had taken him for the night in a hotel, was one of the people who was following his story. Obviously, she felt a special connection with Mugzy after their time together, and she had played a part in him changing his life. Durer even donated money to the Final Refuge program to help with the expenses.

In his new home, Mugzy was thriving. He had a foster sister to have lots of fun with, his own spot on the couch, and he was showered with love and attention from his foster mom. Mugzy finally had everything he ever wanted in life. He lived this happy lifestyle for two blissful years. Sadly, Mugzy died at home on December 2, 2019. HART informed his followers on Facebook that he had passed away, and that they were sad to say their final goodbyes to the much-loved dog. They took the opportunity to look back over the two and a half years that they had been involved in his like by updating the page with lots of photographs that showed their favorite memories of him.

Although it is very sad that Mugzy has now died, there are many positives that people can take from this story. Mugzy had once lived a miserable life in a shelter, but he had captured the hearts of many. An act of kindness from a volunteer helped to change Mugzy’s life for the better, and he finally had the chance to live in a loving and happy home environment. There had once been a chance that Mugzy would spend his final days in a shelter, but he was lucky enough to find a forever home. This meant that he spent his final days comfortable and surrounded by people who loved him. Therefore, Mugzy got the happy ending that he needed and deserved. Sadly, not all dogs have the chance to enjoy the same happy ending, so it is vital that organizations such as HART continue to get support from the public.