Home
Dog Tips
How Do You Train Your Dog for the Rain?
Prev Article Next Article

Search YouTube for “owners trying to give their dog a bath” and you will spend a good amount of the day watching owners wrestling with or trying to convince their dog to enter the world of canine hygiene. Most of the attempts end up with a certain amount of success but an unhappy pet. Some owners know that even saying the word “bath” will have their furry friend running for cover.

So rain to a dog is what a shower is to a human – another way of taking a bath. Now it’s one thing to try and get your dog to soap up, but quite another to get them out of the house into the rain to do their daily doody. Most dogs would rather explode internally rather than venture out into a pouring rain. The choices for the owners are few: wrestle with them and get them out the door, watching them cross their legs, or prepare to clean up a mess.

It seems easier to get them used to the idea that the rain isn’t really a bath, just something that nature brings their way from time to time so their water bowl can be full. Some dogs take to the rain like a 3 year old takes to playing in the mud. Then there are all the others.

First, if you don’t like the rain what right do you have to expect your dog to be different? Even if you don’t, do some dog acting to make both your lives easier. Go out during the heavier downpours because when it’s just drizzling the dog will think nothing of it. The younger you start them getting used to the idea, the easier it will be in the long run. (This is actually just a matter of math.) But whatever you do, don’t take an umbrella because they will be looking for theirs. (Yes, there are dog umbrellas, but really…) And whatever you do don’t wear those little rain booties – either of you. 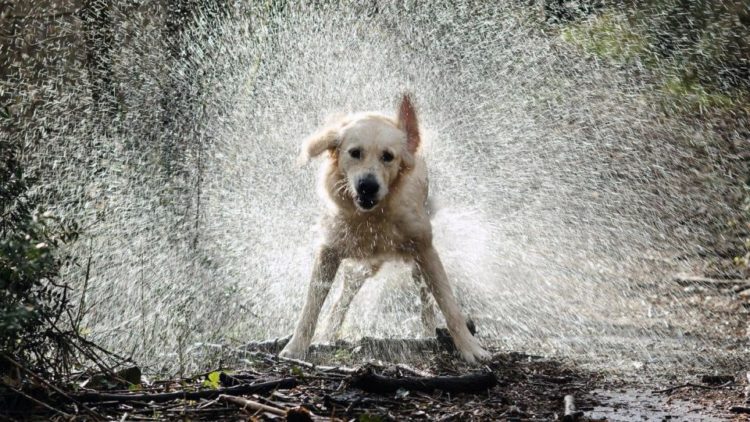 The next step requires even more of you. Continue your dog act by playing with them during the downpour. This may not be so easy if you’re over 50 or hate getting your clothes wet. The obvious question is what pair of pants to wear for this adventure. You will have to get down to dog-eye level for them to fully appreciate the experience and believe this whole getting wet thing is nowhere nearly as bad as they first thought.

You will likely want to bring along some treats to reward them for having them watch you do a reasonable acting job. Keep them in a plastic bag, otherwise your offer may be rejected. If you really are committed to getting down and doggy dirty, take along some toys for them to play with. It will keep their mind off of the rain and on to your slip-and-slide efforts.

It is important to realize that this is all part of a strategy to get them to go to the doggy potty in the rain. Underlying all this bad acting is the idea that they will be less stressed about the entire idea of rain. It will be, as was said at the beginning, just another natural event.

This brings to mind a critical point: do not think a garden hose is a substitute for rain. It’s not. More than likely the dog will think it is a punishment, and you have just added several very thick layers to your potty training in the rain effort. What can be easily missed is that dogs use their senses of smell and sound to navigate their environment. The smells and sounds of a rainy day are nothing like a garden hose on a sunny say. Just sayin’.

If you can manipulate a friend to go along on this journey, which can be the equivalent of asking them to help you to move, have them bring along a smartphone or camera. Film the entire sequence and play it back over and over for your dog over the next several weeks. This allows you to have to only go through this once while your dog will have it etched into their memory forever.

An obvious but important consideration is to never do this when there is lightning or thunder. The situation is too dangerous for both of you, and the sound is likely to startle the dog and stress them out even more. Some owners suggest starting them out in a light rain, maybe because there is less chance of a thunder or lightning event. But it should have nothing to do with the amount of rain because even if you tub or wash sink is filled with only a little water, does that mean anything to the dog?

Should all this fail despite your best efforts, you will probably have to wrestle with them and get them out the door – if you can find them.

Everything You Need To Know About Pit Bull Teeth

20 Things You Didn’t Know about The Puggle