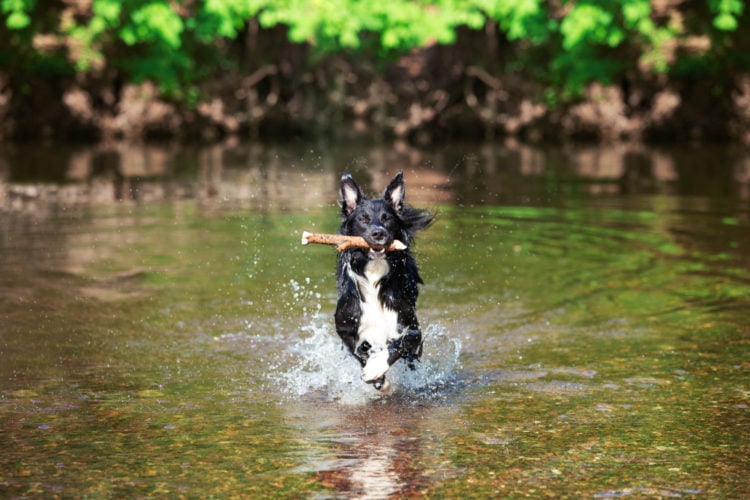 Very recently, kayakers found a dog named Ethyl on a bank of the Chariton River in Centerville, IA. Initially, she was skittish, which is perhaps unsurprising considering the bad condition in which she was found. However, the kayakers managed to convince Ethyl to get onto a kayak before returning her to her owner. This was fortunate because the dog had been missing for six days, meaning that this story could have had a very different ending.

How Well Do Dogs Survive on Their Own?

Dogs can’t survive very long without food. The exact period of time can see significant variation from dog to dog depending on factors such as their size, their health, and their activity level. A dog in good health can go for about five days. In contrast, a dog in not so good health can go for about three days. Of course, this is assuming that the dog is still getting enough water to drink, which is an even more important consideration. This is because dogs will start seeing serious dehydration-related issues after 24 hours. If said issue remains unresolved, well, suffice to say that a dog will need emergency medical intervention to prevent organ failure or worse if they reach their third day of having nothing to drink.

In any case, this should make it clear that dogs getting lost in the wilderness is a very dangerous scenario for them. They are animals. Furthermore, some of them can be very strong, very tough animals. However, none of those things can guarantee a dog’s survival out in the wilderness anymore than those things can guarantee a human’s survival when they have been thrust into an unfamiliar environment with no expertise, no experience, and no other resources that they can make use of. Yes, dogs are descended from wild ancestors. Still, most modern dogs are not equipped to survive the wilderness.

Unfortunately, the fact of the matter remains that at the end of the day, a dog out in the wilderness on their own will be facing a whole host of serious challenges. Finding food and water are both important. However, there are plenty of places where finding shelter will be just as important if not even more so. There are a lot of dogs with shorter-haired coats, meaning that they won’t do so well in places with colder temperatures. Furthermore, dogs face competition from other animals, which include a number of species that might be tempted to prey on them. Even if dogs can fend them off, such encounters will always be dangerous, particularly since any injury will cause their chances of survival to fall even further. Under ideal circumstances, dogs in the wild can boost their survival rates by teaming up with one another. Unfortunately, if a dog gets lost in the wilderness, it seems rather unlikely that they will be able to luck into a suitable pack. As such, it is no coincidence that wild dogs tend not to live as long as their pet counterparts. In fact, Ethyl is 10 years old, which is already older than what the average wild dog can expect to live to.

What Can You Do If You Are Concerned about Your Dog Going Missing?

If people are concerned about their dogs not being able to survive out in the wilderness, there is a lot that they can do to make their dogs more familiar with natural settings as well as more adept with natural settings in other respects. However, it seems more useful to focus on ways to prevent their dogs from getting lost in the first place, particularly those preparations will prove useful in a number of other scenarios as well.

For starters, it is always a good idea to make sure that the dog has ID. The kayakers who came upon Ethyl managed to identify her because of her tag, thus showing why tags can be very useful. However, it is important to remember that tags can come off for one reason or another, meaning that they aren’t perfect. One way to mitigate this potential issue would be checking the dog’s collar on a regular basis to make sure that everything is working as it should be. Another way would be having a microchip implanted. Said process is fast and painless. Furthermore, it is permanent, which should provide interested individuals with a considerable measure of peace of mind. Besides this, it is worth practicing some other precautions as well. One example would be keeping the dog on a leash whenever they are outdoors, which should minimize the chances of them successfully running off on their own. Another example would be securing the yard, thus preventing them from running out into the wider world when they should be safe and secure in the yard. However, if there is a single thing that is more important than anything else, that would be paying attention to the dog whenever there is a chance of them running off.