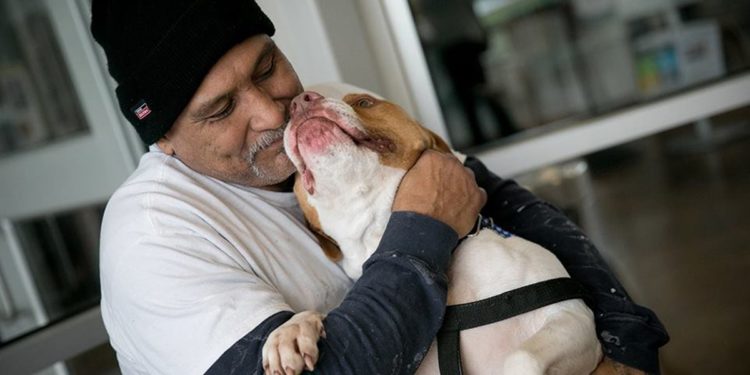 Like many people, Lewis Jimenez didn’t have the best of starts in life. He grew up poor, he stayed poor, and he did what he could to get by. Eventually, getting by meant breaking the law, leading to arrest, court, and a 20-year prison sentence. But while some people come out of prison worse than when they went in, Lewis was different. When he finally got out a decade ago, he was a changed man, a man committed to “do right, do good, help people out.” But it wouldn’t just be people that Lewis ended up helping out. In 2013, he paid a visit to Austin Animal Center, an animal shelter in Austin, Texas. It was there he met his new best friend, Titus, a tiny little pit bull pup who immediately won Lewis over.

Even before he met Titus, Lewis wanted to adopt a pit bull. Aware of how pit bulls face more discrimination and experience a harder time than most in finding happy homes, he was determined to give one a great life. And that’s exactly what he gave Titus. Even though times weren’t always easy (at one point, they spent 10 months living together in Lewis’s car), they always looked out for each other. When things got tough for Lewis, Titus took care of him and, as Lewis told Today, “I returned the favor.”

The End of the Good Times

Even though Titus is as loveable and placid a dog as you could wish for, he’s also a pit bull. And being a pit bull isn’t easy. Not only do people tend to cross the street when they see you coming, but you’re also banned outright from entering numerous cities and counties across the country. Facing the realities of breed-specific discrimination was something Lewis quickly got used to, but then, last November, something happened that went beyond the usual comments and frightened looks. One of Lewis’s neighbors had already made it very clear that Titus wasn’t welcome. Over the previous three years, he’d made numerous complaints to Lewis and to the management of the complex about having a pit bull on the premises. It had reached the point where Lewis felt compelled to walk Titus only when he knew no one else would be around.

But then one afternoon, things reached a crisis point. While Lewis was out at work, his daughter and 10-year-old grandson visited the apartment. Unaware of the problems Lewis had been facing with his neighbor, his grandson set out to take Titus for a walk. The timing couldn’t have been worse. At the same time as Titus and Lewis’s grandson were heading down the stairwell, the neighbor was heading up. Although Lewis can’t be sure of the exact details of what came next, it ended in Titus nipping the neighbor’s hand. Although Lewis believes that Titus was acting to protect the child, he had no proof. He also knew that there was zero chance of the neighbor letting the incident go. After three years of trying to get Titus evicted, he finally had the ammunition he needed to do just that.

Back to the Shelter

Fearing that Titus would be taken away or evicted from the complex, Lewis had to make a difficult decision. With nowhere else to go, he came to the heartbreaking conclusion that returning Titus to the shelter was the only viable option. “I had to give Titus up,” he told Today. It wasn’t a choice he wanted to make. Titus had become his “other half.” Walking away from him at the shelter was one of the hardest things Lewis had ever had to do. But he knew he had no choice. Before he left, he made a firm promise to his best friend. Come what may, he would find a new place to live and as soon as he did, he would come back and get him. He could only hope he’d find somewhere soon.

Over the coming months, Lewis visited Titus whenever he could. But at the back of his mind, the clock was ticking. As theanimalclub.net reports, the shelter has a “live release rate” of 97.9 percent, which means that almost all the animals that arrive at the shelter will make it out alive. But while the chances of Titus being euthanized were slim, there was always the possibility that someone would decide to adopt him. If that happened, any chance of a happy reunion would be gone for good.

Determined to be reunited with Titus, Lewis put all his efforts into finding somewhere that they could live together happily. And finally, he did. In late February, he and his girlfriend found a rental that was ideal for Titus. It needed a bit of remodeling to be bought up to scratch, but as Lewis is a handyman by trade, he knew he could manage the work without any problems. With the ink still drying on the rental contract, he rushed to the shelter to pick Titus up. Although everyone at the shelter had become attached to the dog while he’d been their guest, they were overjoyed that he was finally going home with his best friend.

“Titus got lots of love here at the shelter from staff and volunteers. He went on regular walks, played with toys, and got lots of treats,” Jennifer Olohan, a spokesperson for the shelter says via iheartdogs.com. “News of Titus’ reunion spread through the shelter pretty quickly and there were tears from everyone.”

But no one was quite so pleased as Titus. Although they’ve been back together for several months now, it seems the little dog still can’t quite believe his luck at being back with his owner. When the pair settle down on the sofa to watch TV, Lewis says Titus just sits and stares at him, as though he can’t quite believe he’s really there. It’s a feeling Lewis knows too well. As grateful as he is to the shelter for caring for Titus during those long months of their separation, nothing compares to just how grateful he is to have his best friend beside him again. “He’s home. He’s home, and he’s happy,” he says.