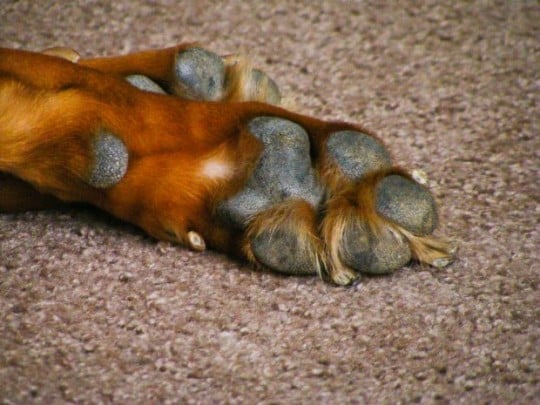 Tails are wagging, noses are in overdrive and the local park is abuzz with canine activity. Your furry friend is in its element, charging around like a shopper on a big sale day, bounding through long grass and dirt and relishing a few delectable smells. All is good in doggie world . . . until you notice your dog is suddenly limping. The great outdoors (and sometimes even indoors) can present a multitude of perils for dogs and their owners. Becoming familiar with your dog’s paws and aware of potential hazards will help both you and your dog with any potential paw problems that may arise.

The Problem Is Clear (Sometimes)

While a glass-induced gash may be obvious, tiny shards of glass piercing the foot can be hard to see. “Usually, soaking the feet in warm water will assist in pushing the glass out,” says Jason Fusco, DVM, ACVS, an orthopedic surgeon at New York’s Animal Medical Center. If your canine is still limping after the warm water soak, bring it to a veterinarian for further assistance. A few times a year, Dr. Fusco will see a dog with mysterious lameness, which generally turns out to be caused by a piece of chewing gum stuck in the hair between the pads. In addition to chewing gum, escalators can pose problems for dogs’ paws. “We have seen instances of inch-deep cuts, and even giant parts of feet sliced off from escalators,” Dr. Fusco says. For this reason, try to avoid taking your dog on an escalator. But if you must, carrying smaller dogs could help prevent this problem.

In colder climates, salt on the sidewalks and roads presents a winter challenge, as ice and snow can become lodged in the crevices of the paw and cause your dog pain. Louise Murray, DVM, director of medicine for the ASPCA’s Bergh Memorial Animal Hospital, learned just how painful winter walking can be for dogs when she fostered a young pit bull named Sophie. “She couldn’t walk more than a few steps before her paws hurt so much that she would stand there and lift them up one by one and stare at me,” Dr. Murray says. You can help prevent this paw pain by avoiding obvious areas of salt. Some other alternatives are to put boots on your dog’s paws or use musher’s wax to protect the feet, suggests Dr. Fusco. During the summertime, be aware of hot surfaces. Dr. Murray notes, for example, that black asphalt will be hotter than a light-colored sidewalk or patches of grass.

When dogs spend most of their lives indoors, their nails can grow so long that they dig into their pads, catch and tear, and even make it difficult for the dog to walk. Dr. Murray recommends getting advice from your vet on the how to  clip your canine’s nails, or having the vet do it for you. The dewclaw — a residual thumb — can grow into your dog’s foot and should be watched carefully and trimmed, Dr. Fusco says. He warns owners of older dogs to be alert for a nail falling out or getting pulled off, since this can be a sign of cancer.

Like us, dogs can suffer from allergies. While we exhibit symptoms through respiratory problems, dogs tend to get itchy skin, particularly itchy paws. A dog with an allergy will lick its paws incessantly, causing the paws to turn a reddish brown color from the red dye in the dog’s saliva. A vet trip is in order if you observe such symptoms, especially since they could also be linked to an inflammatory disease called pododermatitis. Dr. Murray notes that this can be attributed to several factors, including a bacterial infection, an allergic reaction, or even an overactive immune system.

Certain breeds can be prone to special problems. Greyhounds and Rottweilers are susceptible to sesamoid disease, a non-specific lameness that’s difficult to diagnose, Dr. Fusco says. Greyhounds also are prone to corns from abnormal weight-bearing on the toes. “Removing the corns will only cause them to come back if the weight-bearing is not adjusted,” he says. Controlling weight gain through feeding with restricted calorie commercial pet foods and monitoring consumption amounts is one way owners can keep weight-bearing problems in check. Surgical procedures may also correct more severe, chronic conditions.

According to Dr. Murray, grooming is even more critical for curly-haired dogs, such as poodles and Bichons. “If they’re not kept well-groomed, the hair can get so matted that it gets tangled around their legs and can cut off their circulation,” she says. “When that happens, the dog can lose the lower part of the leg or the foot.”

As we can see, dogs’ feet are complex. This makes breed issues, hair between paw pads and overgrown nails difficult to detect. Keeping an eye out for signs of discomfort, and staying on top of day-to-day care can ensure your dog is happy, healthy and eager for its next walk.

Kim Ribbink is a freelance writer and editor based in Perth, Australia, who specializes in health care and the life sciences, as well as pets. She has been a journalist for 20 years, working for magazines, newspapers and online publications covering a broad range of topics.