Photos can become popular on the Internet for the strangest reasons. For proof, consider how people have become fascinated by pictures of Irish Wolfhounds in recent times, with the result that more and more pictures are being posted. With that said, their fascination is understandable, seeing as how Irish Wolfhounds are very striking animals to say the least.

In short, the Irish Wolfhound is a huge breed of sight hound that came into existence in Ireland. However, no one is sure how the breed came into existence, which is perhaps unsurprising when the predecessors of the modern breed might be the ones mentioned in Ireland mythology and other stories. Regardless, Irish Wolfhound are famous for their size, so much so that it is perfectly possible to find a member of the breed that can stand taller than their human masters when standing on two legs.

Why Are Irish Wolfhounds So Big Anyways?

Some people might be wondering why Irish Wolfhounds are so big. If so, they should know that the name of the breed is very literal, meaning that once upon a time, the breed was used for fending off wolves as well as other serious threats. As a result, a bigger size meant a higher chance of success at winning the encounter by causing the relevant target to back off. For that matter, a bigger size can prove very useful when such encounters turn violent, seeing as show size has a very important impact on their outcomes.

With that said, sheer size is not the sole reason that people might be interested in the Irish Wolfhound. While their sheer size can make them a rather inconvenient choice for interested individuals, Irish Wolfhounds are famous for being smart, reserved, and introverted. Combined with a reputation for closeness with their human masters, it is no wonder that there are people out there who are eager to welcome the animals into their homes. 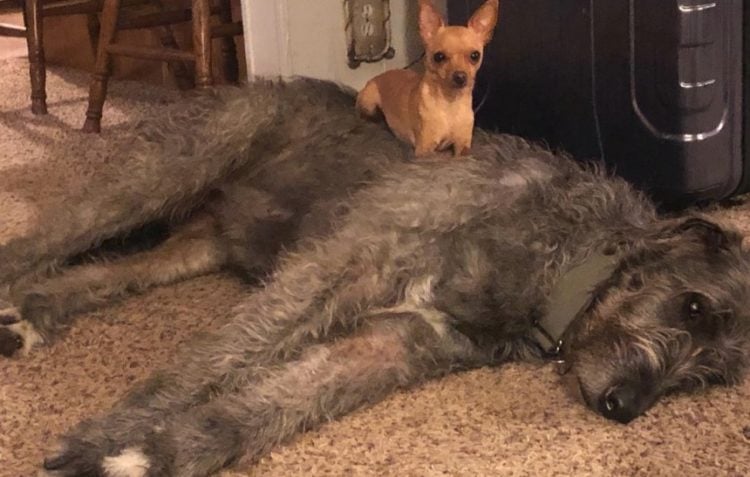 Of course, Irish Wolfhounds have some potential issues as well. As stated earlier, their size can be a serious impediment for interested individuals, seeing as how they are supposed to stand at least 30″ for females and 32″ for males. This means that for a lot of people who might be interested in Irish Wolfhounds under other circumstances, they just don’t have the space needed to accommodate 100+ pound animal companions. Moreover, it is interesting to note that while some people have tried to use Irish Wolfhounds as guard dogs, this tends to be a less than effective solution. This is because while Irish Wolfhounds are perfectly prepared to protect their masters should they see some kind of threat to said individuals in their presence, they don’t have the same protectiveness for their homes. As such, so long as their human masters aren’t touched or otherwise threatened, they might very well just ignore intruders

On top of this, the closeness of the bond between Irish Wolfhounds and their human masters can be something of a double-edged sword. On the one hand, it enables them to form very powerful bonds with humans, thus making them much more biddable than what some people might expect. On the other hand, that same closeness can cause Irish Wolfhounds to get very upset when they are separated from their human owners for long periods of time, meaning that they can get destructive and disruptive when they are not used to being left alone. Fortunately, none of these issues can be considered anything close to being insurmountable problems, meaning that interested individuals shouldn’t give up on the breed just because of them.

With that said, even if people aren’t planning to bring their very own Irish Wolfhound home with them, there is nothing wrong with them checking out the collection of Irish Wolfhound pictures that are being posted here and there. They are big dogs, but they are also very amusing dogs, which is why said process is bound to provide interested individuals with a lot of entertainment. On the whole, it is safe to say that it is a very good thing that Irish Wolfhounds managed to survive the plummet in their numbers because of the elimination of wolves on Ireland, which is not something that can be used for all of the other breeds that have seen fundamental changes in their intended purposes.