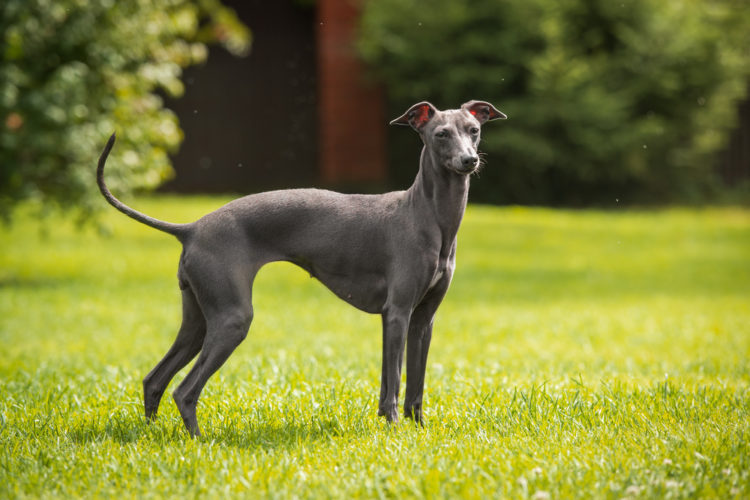 Italian Greyhounds are sighthounds on the smaller end of things. Generally speaking, they are supposed to have a height of 32 to 38 cm without exceeding a weight of 11 pounds, meaning that they are closer in size to lapdogs than to English Greyhounds. As for why Italian Greyhounds were ever created, well, it seems that they saw some use for hunting hares and rabbits. However, they were apparently used as pets in the past as much as in the present.

What Can You Expect to Pay For an Italian Greyhound?

Purebred dogs tend to be expensive. Unfortunately, Italian Greyhounds are no exception to this rule. Generally speaking, if people want to buy one of these dogs from a reputable dog breeder, they can expect to spend $1,400 to $2,000. However, it is important to note that Italian Greyhounds can be found for both much higher prices and much lower prices. Presumably, most people won’t be looking for a dog with either champion parents or some other prestigious background. Still, if they want such an Italian Greyhound for whatever reason, they shouldn’t be surprised if the price reaches something like $2,500. On the other end of things, people should remember that the price of a dog reflects the kind of resources that have gone into that dog. It is possible to get a happy, healthy Italian Greyhound for a lower than normal price. The issue is that the lower the price, the higher the chance that costs were cut that shouldn’t have been cut. Something that can mean physical issues as well as behavioral issues in the long run.

People have another realistic option besides buying an Italian Greyhound. That would be either adopting or rescuing one of these dogs that are in need of a new home. It is possible that they will still have to pay a few hundred dollars. Even so, chances are good that will be much less expensive than buying an Italian Greyhound. Furthermore, the prices paid to animal shelters and similar organizations tend to be spent on healthcare as well as other necessities, so if it helps, people can think of it as paying for things that they were going to pay for anyway. In any case, there are some potential downsides to either adopting or rescuing one of these dogs. For example, there is no guarantee that people will be able to find an Italian Greyhound that is suitable for them, which is why they should make use of online sites that are meant to connect would-be dog owners with dogs that are in need of a new home. Similarly, the Italian Greyhounds that get sent to animal shelters and similar organizations can have various issues, though chances are good that would-be dog owners will be warned about them ahead of time so that they can make the appropriate preparations. With this as with other things, there are trade-offs that people will need to evaluate for themselves.

Dog ownership comes with considerable start-up costs. This means dog supplies, dog accessories, and the like. People might be able to save on some of these start-up costs if they already own a dog. However, chances are good that they won’t be able to eliminate everything. After all, it is hard to imagine people having both an extra dog bed of the right size and an extra dog crate of the right size for no reason whatsoever. Never mind the other potential start-up costs. Once everything has been added up, people shouldn’t be surprised to see themselves paying $400 to $600 for their new Italian Greyhound.

An Italian Greyhound’s monthly costs should be much less than their start-up costs because the latter includes a lot of things that either won’t need to be replaced or won’t need to be replaced on a regular basis. Furthermore, these dogs aren’t very demanding when compared with some of the other dog breeds out there. For example, they are quite small, meaning that they eat less than bigger dogs. Similarly, their coats are quite manageable, meaning that they shouldn’t need a lot of expert grooming. Most costs such as food, grooming, and entertainment shouldn’t even hit a hundred dollars. Combined, an Italian Greyhound’s monthly costs shouldn’t hit the high hundreds of dollars. The single biggest potential cost would be the price of paying someone to walk them, which is necessary for maintaining both their physical and their mental wellbeing. Fortunately, people can just avoid that by walking their Italian Greyhound on their own. Having said that, if they choose to entrust said process to a professional dog walker, they should expect to pay a few hundred dollars over the course of a complete month.

Medical costs are worth mentioning on their own. There are some start-up medical costs, which can add up to a few hundred dollars depending on exactly what people get for their Italian Greyhound. After that, the monthly medical costs for exams, vaccines, and other preventative healthcare should be much cheaper. Combined, they shouldn’t cost more than a hundred dollars on a monthly basis. Be warned that changes if an Italian Greyhound develops some kind of serious health issue, which will become likelier and likelier as they get older and older. Treatment for just a single serious health issue can cost hundreds or even thousands of dollars.

As such, it is a good idea for people to look into pet insurance for their Italian Greyhound. The exact cost of pet insurance can see considerable variation because it is determined by the perceived risk of the insured dog. Still, people shouldn’t be surprised if they are expected to pay $20 to $65 on a monthly basis. They need to make sure that they actually get a pet insurance policy that works for them, which is important because the exact kinds of coverage being offered can have such a huge impact on the premiums.