The police keep the streets safe and free from crime, but their role often includes other duties. As they are going about their daily duties, they are often asked for help in dealing with a situation. This may include people who are lost. There are even occasions when police officers come to the aid of animals in need. While patrolling the streets of Hollywood, Officer Tavera and Officer Mercado cane across a small, chocolate brown puppy, says I Heart Dogs. As they had found the dog o Hobart Street, they decided to call the dog Hobart and took him back to the station with him.

The officers took a photograph of the dog when they put him in the police car. In the adorable picture, Hobart is gazing lovingly at his rescuers. During the ride back to the station, Hobart made himself comfortable in the police car by curling up on Officer Tavera’s lap. On arriving at the station, Hobart did his best to keep up with the officers. Although he only has tiny legs, he ran as fast as his legs would carry him so that he did not get left behind. Hobart had a great time with the two LAPD police officers and he clearly loved them, but they couldn’t keep him with them for the rest of the day as they had other duties on which they needed to focus.

The officers needed to find a safe place for their new little friend, and they wanted to make sure he was safe, fed, warm, and well cared for. They couldn’t bear to see Hobart returned to the streets. So, they decided to contact a local animal rescue called the Ghetto Rescue Foundation. Hobart was welcomed by the rescue shelter where the staff was more than happy to take over the care of the rescued puppy. Before they can put him up for adoption, Hobart will receive his vaccinations and get checked over by the vet. If he needs any further medical care, he will receive this prior to the staff trying to find him a new home. 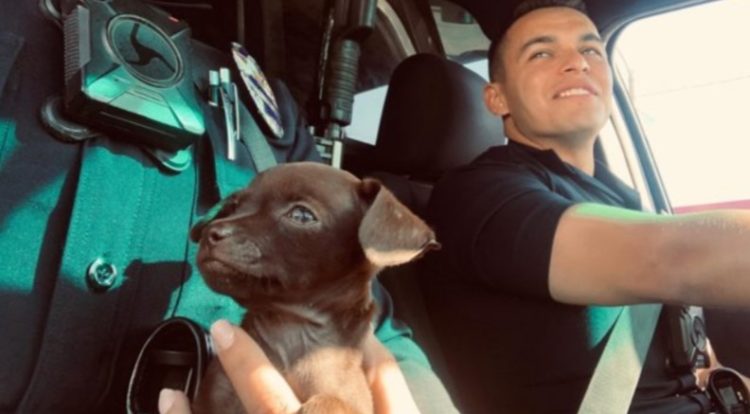 This is normal procedure at most rescue centers. All dogs are given a thorough examination and receive their vaccinations so that they are completely healthy when they arrive at their new home. Not having the responsibility and expense of the vaccinations encourages people to consider a rescue dog instead of buying a puppy from a breeder. In many cases, animal shelters also have a neutering policy. This means that any dog or cat that comes into their care is neutered. This is primarily to reduce the number of unwanted puppies being born. However, the RSPCA says that there are many other benefits of getting dogs neutered.

Male dogs have a reduced risk of testicular cancer, while female dogs will not suffer from womb cancer or infections of the womb. In males, neutering can also reduce the likelihood of urine marking and make a dog less aggressive. Other treatments that Hobart may have undergone in preparation for rehoming include worming and flea treatments. Having these treatments means that dogs have a clean bill of health when they go to their new home, and there is a reduced risk of them being returned to the shelter. Therefore, taking these measures is a vital step in ensuring that all adoptions are successful.

One of the problems is that providing this level of care and so many treatments to Hobart and other dogs is expensive. This is one of the reasons that shelters have to work so hard to raise funds to care for the animals. Now that Hobart has received all the necessary vaccinations and treatments, he is ready to find his forever home. With such an adorable face, it is likely that he will not have too long to wait before he is adopted.

Hobart is just one of many dogs that are rescued by the police each year as the police rescuing dogs they come across during their duties is surprisingly common. While Hobart was not in any immediate danger when he was rescued by police officers, there are other dogs that need urgent help. The Independent reported a story about a dog that was rescued by an off-duty police officer and was in need of emergency assistance, and this is a story that could have had a tragic ending. Joseph Puglia is an off-duty officer who was driving down the busy Interstate 275 in Tampa Florida. He saw something lying in the outside lane and realized that it was a dog that had been hit by a car. His car’s dash-cam caught the whole incident that followed.

Putting his own life at risk, Puglia pulled over his car and ran to check the dog. As the dog wasn’t moving, Puglia initially believed that the dog was dead. However, when he reached the dog, he saw that the dog was still breathing. This gave him hope that the dog had a chance of survival. Mr. Puglia had an emergency blanket in the back of his car. He used this to wrap up the dog and drag it back to his vehicle so that he could take the dog to get help. Puglia then drove the dog to a nearby veterinary surgery for him to get checked out by the vet.

After being thoroughly examined, the vet declared that the dog had nothing more than minor injuries, which was quite miraculous. As the dog had been so lucky, it was decided that he would be given the name Lucky. One the vet had given the dog the all-clear, he was taken to a local animal shelter for care until they could find him a new home. It is hoped that someone will come forward to adopt Lucky soon. If nobody comes forward to adopt him, his rescuer Mr. Puglia has said that he and his family are happy to adopt the dog themselves.