The Spinone Italiano is an Italian breed that has seen extensive use as gun dogs but is more than capable of serving in other roles as well. There was a time when the breed was on the edge of extinction, but it is in a much healthier state in modern times. Here are 10 things that you may or may not have known about the Spinone Italiano:

The Spinone Italiano is considered to be a gun dog, meaning a dog that has been bred for finding and retrieving game. Generally speaking, this means game-birds, but gun dogs can be used for other kinds of game as well. It is interesting to note that gun dogs can be further divided into various categories based on their specialties.

2. It Is One of the First Gun Dogs

3. Some People Think that Its Origins Can Be Traced to Roman Times

There are some people who think that the roots of the Spinone Italiano can be traced to Roman times when Greek merchants brought coarse-haired dogs to the Italian Peninsula, where they proceeded to breed with their local counterparts. Eventually, this process repeated with other introduced breeds, thus leading to the Spinone Italiano that exists in the present through a very gradual process.

4. Sees Use As Companion Dogs

The characteristics that make the Spinone Italiano an excellent gun dog enable it to excel in other roles as well. For example, while the breed is best-known for being working animals, there are plenty of members who serve as companion animals. Something that speaks well of their temperament.

5. Sees Use As Assistance Dogs

Speaking of which, the Spinone Italiano sees use as assistance dogs as well, referring to the dogs that help out people with various disabilities handle the various challenges that can come up in the course of their daily routines. Naturally, this is a huge responsibility for the dogs, which is why assistance dogs tend to be chosen from a select group of suitable breeds. 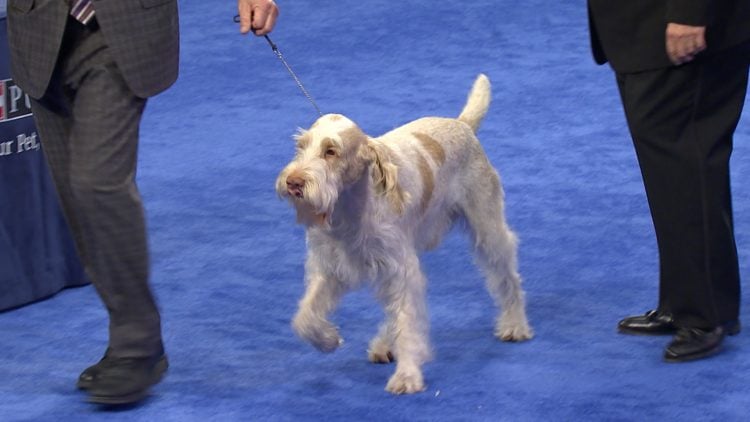 On the whole, the Spinone Italiano is considered to be a well-behaved breed. For example, it is relatively mild in temperament. Moreover, it is very fond of humans, which is a positive characteristic that is combined with an impressive measure of patience as well.

With that said, members of the Spinone Italiano breed still need to be trained. It is not unknown for said dogs to show signs of fear aggression if they have not received the proper socialization when they were young. For those who are unfamiliar with the term, fear aggression is essentially when dogs show aggressive behavior in an attempt to make whatever it is that is scaring them to go away. Certainly, it is a problem that can be overcome through rigorous effort, but it is best for it to not have come up in the first place.

Positive reinforcement tends to be a good idea when training members of this particular breed. This is because they can be rather sensitive, meaning that they won’t respond well to anything harsher.

The Spinone Italiano was one of the many breeds that came close to extinction in the Second World War. In part, this was because of the war itself. However, it should also be noted that the breed had already been eclipsed in popularity by a wide range of other hunting breeds, thus making it more vulnerable in the first place. Nowadays, the Spinone Italiano still isn’t the most popular hunting breed in Italy, but it has managed to become much more common and much more widespread.